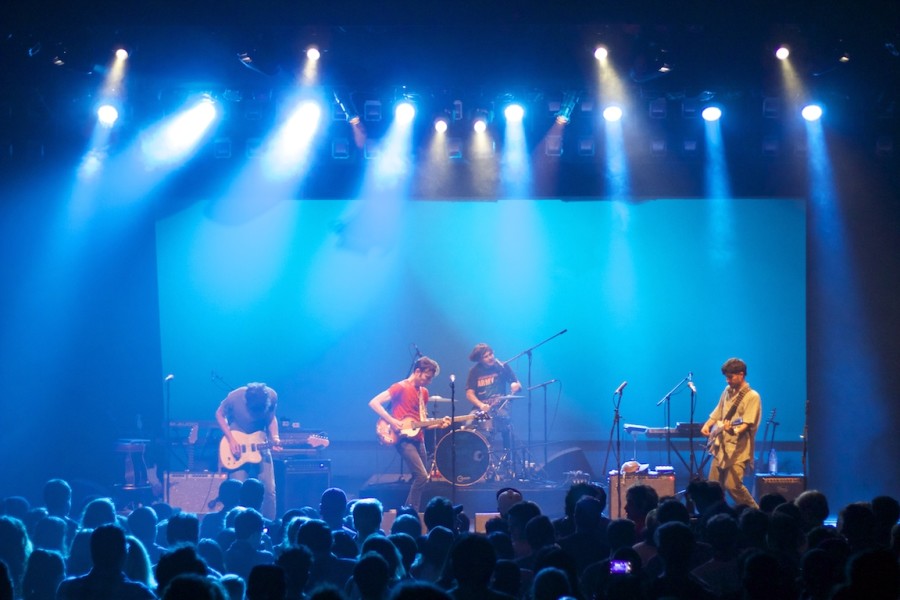 The Observatory North Park was recently jam-packed with powerful punk performances. From local band The Frights on Saturday, Oct. 17, to Black Lips on Sunday, Oct. 18, the historic local venue was popping with good music.

By the time the second band Dune Rats, a filthy, stoner Australian garage-rock trio, took the stage, a musty smell of sweat permeated the entire theater from the hundreds of teenagers and 20-somethings that packed the house.

The show ended, of course, with the night’s headliner, FIDLAR. FIDLAR came out vibing to R. Kelly’s “Ignition (Remix).” The stage set was complete with two R. Kelly mannequins that bassist Brandon Schwartzel subsequently put his instrument around and serenaded a few times throughout the night.

The mosh pit for FIDLAR’s set was aggressive, and crowd surfing was just a way to escape the close quarters filled with the rank smell of sweat.

The band opened with some songs off its first self-titled album including “Stoked and Broke,” an anthem for stoner ne’er-do-wells everywhere. The impressive crowd even had the band’s lead singer Zac Carper taken aback.

“Wow, this definitely isn’t the Che (Cafe),” Carper said during the band’s set.

Backstage, Schwartzel said the Che is his favorite spot to play in San Diego. He remembered back when he was 16, living in San Diego and nervous to play the small venue. Before FIDLAR gained mass popularity, the Los Angeles-based band could be seen playing San Diego’s more intimate venues like the Che or Queen Bees in North Park.

The band’s energy never faltered Saturday night. The only thing lacking was when the group didn’t come out for an encore after the band played “Cocaine” for its last song. Many fans were left bewildered, chanting for the band to play one last song, a favorite called “Wake Bake Skate.”

The start of Sunday night’s show started out a bit slower, but nothing short of amazing.

Experimental music group Gary Wilson and the Blind Dates couldn’t help but reel in the crowd’s attention, with its outrageous stage antics and funky costumes. Wilson and his band, currently based in San Diego, had the small crowd Sunday night entranced during a song called “I Wanna Lose Control,” with the musicians simultaneously flailing about the stage and wrestling mannequins.

Black Lips, a flower-punk band from Atlanta known for its own outrageous stage antics, was notably more tame than expected, possibly even outdone in weirdness by Gary Wilson and his crew of performance artists and peculiar musicians.

Nonetheless, Black Lips was clearly a crowd favorite with its songs like “O Katrina!” off of its popular 2007 album “Good Bad Not Evil,” and “Modern Art,” a contagiously catchy song from “Arabia Mountain,” released in 2011.

The band’s quick tempo and in-your-face lyrics eventually had the lackluster crowd as rowdy as Saturday night’s, especially by the end of the set when everyone heard the first few notes of “Bad Kids” start to play. Everyone in the crowd was finally jumping off the walls with excitement.

The pleasantly punk weekend at the Observatory was topped off Sunday night with a more mellow performance by indie, experimental rocker Ariel Pink.

The controversial artist was undeniable with his mesmerizing performance of “Lipstick” off of his 2014 album, “Pom Pom.”

Pink’s psychedelic set was the perfect way to end the dreamy punk weekend.