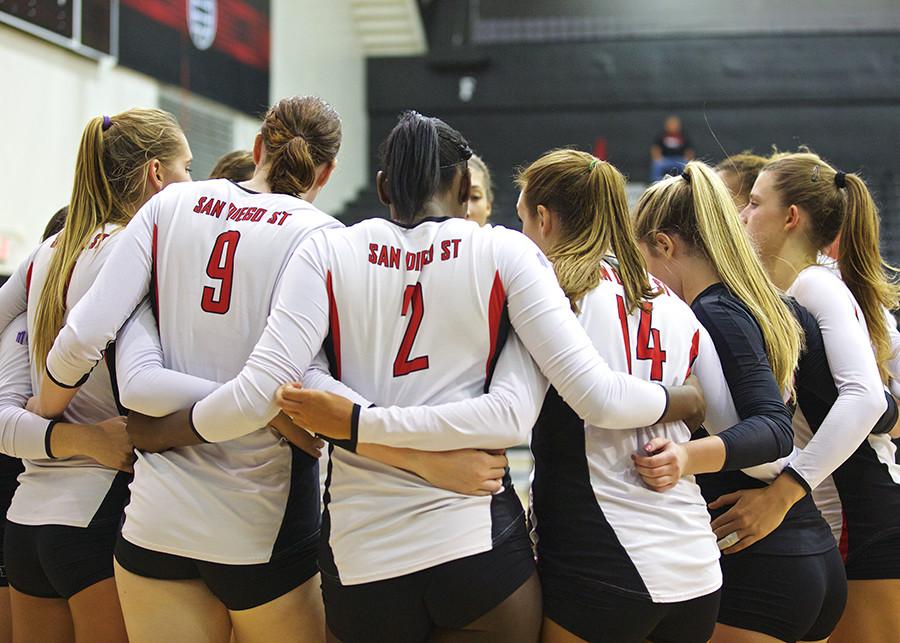 Air Force senior defensive specialist Rachael Bradley Powers started the game with three straight service aces before the teams started trading quick points. The rallies were short and the game stayed close with Air Force holding a slight edge at the last timeout, 23-21. Air Force was able to close out the final three points and take the set 25-22.

The second set started similarly, with Air Force taking the lead at 12-8. Throughout the set, the Falcons withstood strong spikes from the Aztecs and converted hard-fought points that befuddled the Aztecs.

The third set was a different story. The Aztecs started strong with a 9-4 lead at the first stoppage in play. SDSU played inspired volleyball after dropping the first two sets and staved off elimination 25-19.

On the ensuing point, SDSU senior outside hitter Ciara Brown hit the ball up into the rafters where it hit a giant fan hanging from the ceiling. The referees awarded the point to Air Force, but SDSU didn’t let the call get to them as they won their second straight set 25-22.

In the fifth and deciding set, SDSU opened on a 4-0 run that was immediately matched by an Air Force 4-0 run to tie the score. The set went back and forth to a tie score at 10-10. SDSU scored on an error and a well-placed lob to take a 12-10 lead and approach the completed comeback.

Air Force called timeout and took the lead late at 16-15 with a chance to take the match after failing to end it the previous two sets. Air Force finished the entertaining game, set and match with a kill to the right corner, ending SDSU’s comeback attempt.

“Most matches, we usually play our first set pretty well. This is the first time we started slow,” Collins-Parker said. “Although we started slow, we came out of the break and played game three and four maybe better than we ever had.”

At halftime, Collins-Parker talked to the team and their performance turned around big-time.

“We talked about our energy,” she said. “We played flat in the first half and we needed to play with a sense of urgency and we did that. Ciara (Brown) played really well for someone who really hasn’t played in a while. I thought she was an important part of what we did.”

Freshman outside hitter Alexandra Psoma was the Aztecs’ MVP for the match with 16 kills and 19 points. After the match, she shared the same sentiment as her head coach.

“Most of the games we start strong, but tonight we didn’t think too much about the opponent and thought it would be easy,” Psoma said. “After halftime we started hitting higher and got blocked less.”

Despite the loss, Psoma thinks this match could be used as momentum looking ahead to the Aztecs’ match against University of New Mexico.