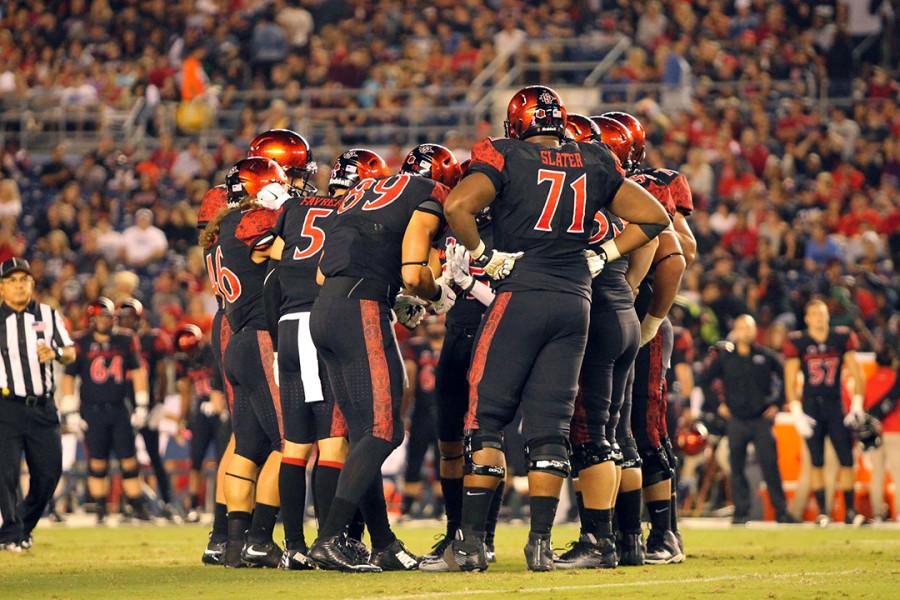 This week, San Diego State plays the biggest game of its season because it has major postseason implications. University of Nevada is going to do its best to confuse all Mountain West viewers, and Boise State is going to make a statement. As always look for the bad bowl name game.

Utah State is coming off a 52-26 drubbing of Boise State. Sophomore quarterback Kent Myers is efficient in the passing game and leads or nearly leads his team in rushing every game he plays.

Against the Broncos, Utah State forced and recovered five fumbles. Though it’s a bit of an exaggeration to call all the fumbles forced, as the Broncos let a few balls loose after minimal contact. So, I wouldn’t rush to put the Aggies into an elite category of defenses that administer bone-crushing hits and knock every ball loose.

Last week against San Jose State, the Aztecs locked down a potent rushing attack. This week the rushing attack comes from either the running back or the quarterback. The biggest question going into this game is how effective head coach Rocky Long’s 3-3-5 defense will be against a running quarterback.

SDSU’s run game is strong and should continue to get better as senior guard Darrell Greene gets more playing time. Graduate-transfer quarterback Maxwell Smith has had two strong performances in a row, but will be tested by the Aggies defense.

Last week I outlined the disastrous quarterback problems at Fresno State. The following day, Bulldogs redshirt-freshman quarterback Kilton Anderson proved disasters don’t last forever when he completed 19 of 31 passes with no interceptions, not counting an interception during a failed 2-point conversion, while rushing for two touchdowns.

If Anderson keeps his play up, he gives Fresno State a legitimate two-headed beast on offense. Because Anderson is entering only the third week of his tenure, no MW team has been able to scout the new Bulldogs.

Air Force has gone 0-3 against the spread in the last three games, and only has one win during that period. Both loses have come by double digits.

Due to injuries at quarterback, Air Force isn’t the team it was at the beginning of the season.

If Hawaii is the second worst team in the conference, then Nevada is the most frustrating team. No one really knows what type of team Nevada is.

On the other hand, everyone knows what type of team Hawaii is. The Warriors’ offense plays good enough to make you wonder how they lose some games, and then you remember the Warriors’ defense — which is the worst in the MW. Out of 128 FBS teams, they are 111th in yards given up, and opposing offenses average 32 points per game against them.

New Mexico still holds the title of the best worst team in the conference. The Lobos rush the ball a ridiculous number of times each game, and do it with efficiency. However, the Lobos’ porous defense gives up 411 yards per game and allows opposing teams to stay in the game.

San Jose State wasn’t itself when playing SDSU last week. The Spartans have played much better over the course of the season, and still have a running back in senior Tyler Ervin, who runs the ball extremely well.

University of Wyoming at Boise State (-35)

The Broncos’ performance against Utah State was an anomaly. Freshman quarterback Brett Rypien will not throw three more picks in a game, especially against Wyoming. Boise State is out to make a statement, which is a perfect segue to the bad bowl name game: From here on out, refer to this game as “The Statement Bowl.”

Wyoming secured its first win of the season last week, and the Cowboys hope to ride the near-perfect quarterback play of senior Cameron Coffman to another victory. Coffman completed all but two of his passes. All of that is great for the Cowboys, but remember they were playing Nevada, and that this year Nevada’s team makes no sense.

For Boise State to win against the spread, the Broncos need to score 36 points. They are still the best team in the MW and remember, this is “The Statement Bowl.”

Bye week: Colorado State and UNLV have a bye week.

This week’s odds were set at 5:30 p.m. on Thursday, Oct. 22, and come from vegasinsider.com. This is not gambling advice, nor meant to encourage gambling.