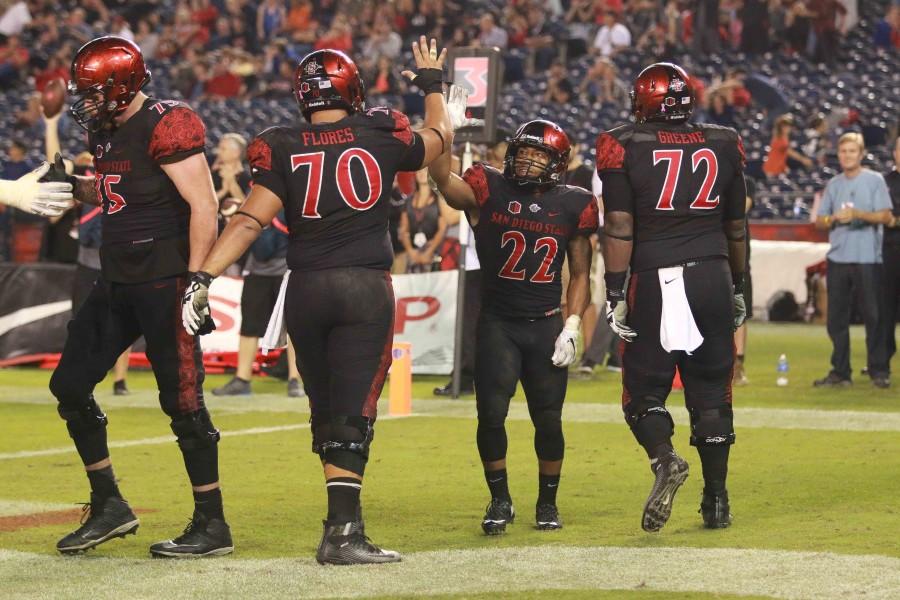 The contest to declare the best in the Mountain West was no contest at all.

San Diego State football put its foot on the gas early, and never slowed up against Utah State in a 48-14 win.

After a quick three-and-out on their first drive, the Aztecs (5-3, 4-0 MW) scored on the last six drives of the first half.

At the end of the half, the Aztecs led 34-7 and left the field to a lengthy standing ovation from the Qualcomm Stadium crowd.

While they started the second half slowly, punting on the first three drives, the Aztecs closed the game well, scoring two fourth quarter touchdowns on their way to victory.

“We are not that much better than Utah State,” head coach Rocky Long said. “But we were tonight.”

With the win, SDSU stands alone as the final unbeaten team atop the MW.

The Aztecs broke several records in a busy first half, both team and individual.

They scored 17 points in each of the first two quarters for the first time since they began NCAA Division I play in 1969.

The defense contributed to the record-breaking performance, forcing three Utah State turnovers, two of which gave the offense the ball inside the USU 25-yard line.

Junior running back Donnel Pumphrey, who is familiar with great halves, further imprinted his name on Aztec football history.

He now only trails SDSU legend and NFL Hall-of-Famer Marshall Faulk, although it’ll be a little harder to catch Faulk, who had 54 touchdowns in his illustrious career.

Everyone gets involved in the rushing attack

Pumphrey was not the only Aztec to make an impact running the ball.

Even for a run-heavy offense, the Aztecs’ performance is in rarefied air.

Senior running back Chase Price had 21 of those for 97 yards, and sophomore running back Rashaad Penny had 10 carries, the most in any game this year, for 38 yards and a touchdown in the fourth quarter.

The rushing success has truly been a group effort.

“They’re pushing guys off the line,” Pumphrey said of his offensive line. “We’re able to make one or two guys miss, and it’s green from there.”

Even senior quarterback Maxwell Smith got in on the attack, rumbling for a one-yard score in the first quarter.

For both Penny and Smith, the score marked the first in their career.