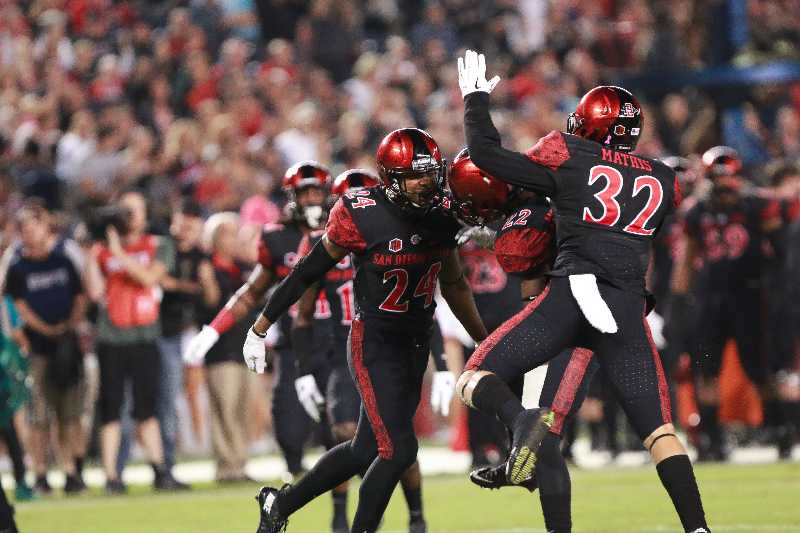 With the lead-up of the game dubbing this being the “Battle of the Unbeatens,” and a possible preview of the Mountain West Championship game, one would have thought the game would’ve been more competitive.

On Friday night with a national TV audience, the Aztecs sent a resounding statement as they bombarded the visiting Utah State Aggies, 48-14.

“We feel good,” junior safety Malik Smith said. “We are happy, but there is a whole lot of football to be played still. But this was a big win for our program and a big win for us.”

In a matchup that showcased two of the nation’s top-20 defenses, it was the boys in the red and black that threw the early knockout punch that had the Aggies scrambling on the ropes for the remainder of the game.

As for the Aggie defense that forced eight turnovers last week against Boise State, it had front-row seats to junior running back Donnel Pumphrey’s show. It should be noted that USU had never played against Pumphrey, but is well-acquainted with the 5-foot-9 back now, or at least the dust he leaves behind as he runs for paydirt.

USU entered the game as the No. 6 rushing defense in the country, limiting teams to 90.8 yards per game, but were helpless to stop Pumphrey and company. Behind Pumphrey’s fourth straight 120-plus rushing game, the Aztecs marched their way to 336 yards on 62 carries and five touchdowns — by four different players.

“We just been in the groove lately and our offensive line has just been controlling the defensive line and Dakota (Gordon), as well,” Pumphrey said.

Pumphrey ended the night with 181 rushing yards on 23 carries and two touchdowns, his ninth career game scoring multiple rushing touchdowns. Senior running back Chase Price continued the ground dominance and ran for 97 yards on 21 carries with a touchdown.

Even with the success and heavy dose of the run, it was graduate transfer quarterback Maxwell Smith who began the scoring onslaught. With an 18-yard strike over the middle of the field, Smith would connect with sophomore wide receiver Mikah Holder to put the Aztecs on the board.

Smith, who was limited to 10 attempts on the night, would do his best running back impersonation and scrambled for a one-yard touchdown run to put SDSU ahead 14-0. That was Smith’s first-career rushing touchdown.

Not to be outdone, the Aztec defense limited the Aggie offense to 205 yards and forced four USU turnovers, which resulted in 17 points for SDSU.

“If they don’t turn the ball over I think it is going to be a very close game all the way to the end,” head coach Rocky Long said. “It might have even gone to an overtime game.”

“We just prepared for him hard all week in practice,” junior safety Na’im McGee said. “We had our quarterbacks in practice scrambling like he would, so we tried to collapse the pocket and keep him in front of us.”

That preparation showed Friday night, as the Aztec defense cut off his running lanes and continually forced him to get rid of the ball. Myers was limited to 22 yards on 10 carries and was 8-19 for 93 yards through the air, including one touchdown and one interception.

Even on his lone touchdown throw of the night Myers felt the Aztec defense, as they barreled into him as he threw a 45-yard pass to senior wide receiver Hunter Sharp.

Senior kicker Donny Hageman continued to produce as he went 2-3 on the night, with makes from 41 and 21 yards.

This win not only marks SDSU’s fourth straight victory and leaves it the only undefeated team left in the conference, but solidifies the identity of this team.

For the fourth straight week the Aztecs have rushed for more than 200 yards and has limited the opposition to under 250 total yards. Ground-and-pound is the name of the game and perhaps the Aztecs’ recipe to success.