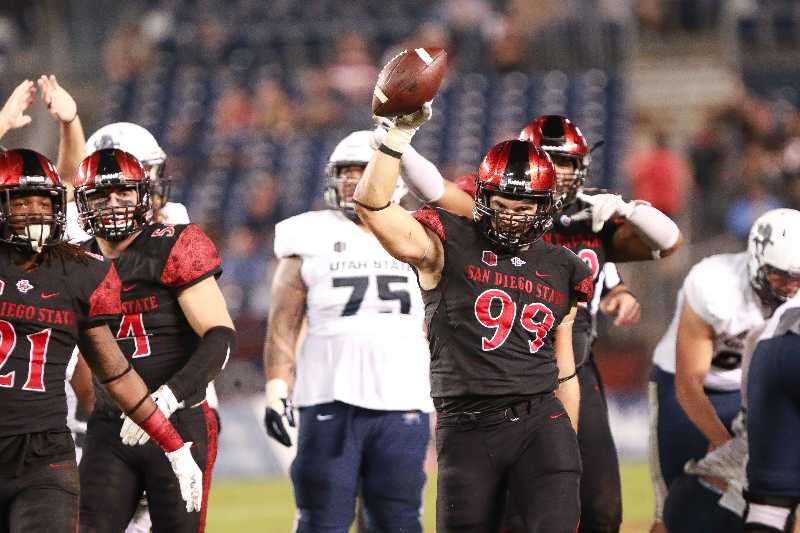 In the Friday night spotlight, San Diego State football capitalized on every opportunity and stampeded its way to a 48-14 drubbing against Utah State, which entered unbeaten in conference play.

With Utah State coming off a 52-26 demolition of Boise State the previous week, leaving the blue turf red with Bronco blood, no one expected the lopsided affair that occurred Friday night.

The win has planted the Aztecs as frontrunners in the Mountain West and in the driver’s seat for a home-field advantage in the MW championship game.

This would have been a far-fetched thought for SDSU as it entered conference play, but the team has enjoyed a complete 180-degree turnaround as it now stands as the lone unbeaten team in the MW at 4-0.

The Aztecs have made huge strides in virtually all facets of their play, having found the biggest difference in their ability to create and capitalize on turnovers.

When looking at powerhouse teams across the country, the one stat besides wins that stands out is the difference in giveaways and takeaways.

The combined record of the eight teams with a turnover differential of plus-nine  or higher is 48-11, and the average winning percentage in 75 percent.

Much like Utah State had done to Boise State the game before, SDSU used invasive defensive pressure to force four Utah State turnovers — one interception and three forced fumbles.

The standout defensive performance was a group effort.

Junior defensive back Malik Smith came away with the interception, his first of the season and fourth of his SDSU career.

The Aztecs have forced 13 turnovers over that span, while only giving the ball away twice.

SDSU has outscored its opponents 106-35 in those three games.

Senior transfer quarterback Maxwell Smith has been able to hold onto the ball more effectively as the season has rolled on, extending his streak without an interception to six games Friday night.

This has been a huge change, as early in the season the Aztecs had a tendency to give the ball away like a hot potato, totaling 13 turnovers in their first five games.

Forcing turnovers is one thing, but being able to cash in on them is a whole other task.

The Aztecs scored 17 points off of USU turnovers, which by itself would have been enough to beat the Aggies on Friday night.

Even more, two USU turnovers were forced in the first 18 minutes, helping SDSU jump out to a 14-0 lead at the 6:04 mark in the second quarter.

Jumping out to early leads has become common for SDSU.

The Aztecs have outscored their opponents 73-13 in the first quarter, giving the defense a chance to take more chances.

“You can be much more aggressive, because even if you give up a cheap (touchdown), you’re still in the lead,” head coach Rocky Long said, after beating the Aggies.

The formula has been simple: Force early turnovers, run the ball and walk away with the win.

This formula has not only led the Aztecs to a four-game winning streak, but a clear path to the MW championship game and their sixth straight bowl game appearance.