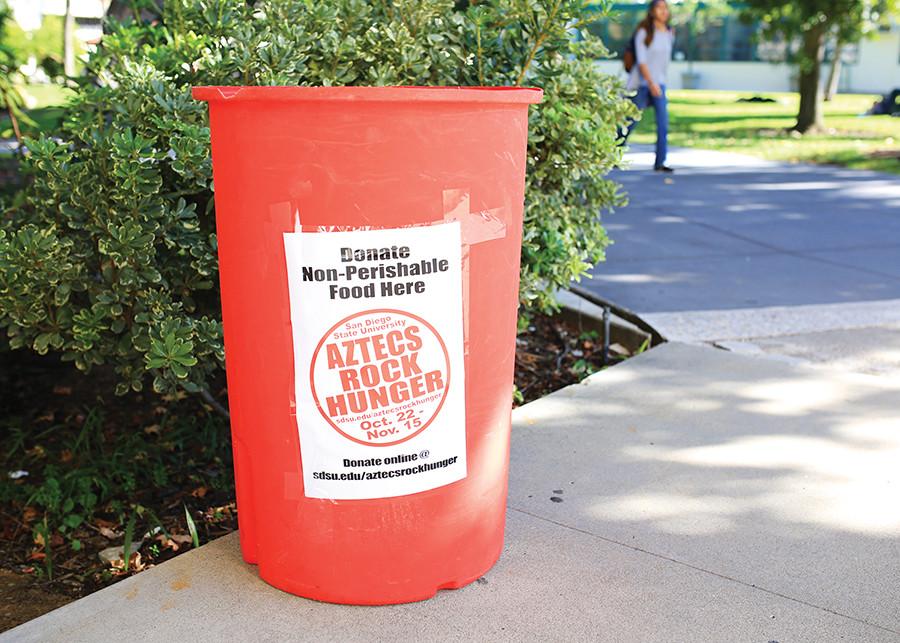 In front of a crowd of around 150 students and faculty, Karen Molina, a junior majoring in finance, detailed what it was like to be evicted from her home when she was a junior in high school.

Her mom and four siblings spent the next eight months without a permanent residence, all while Molina was juggling college applications, taking the SAT, running cross country and maintaining a social life.

“Sometimes my friend would invite me to places or to stay after cross country, and I couldn’t because I didn’t know where I was going to go to sleep that night,” Molina said.

Junior communications major Courtney Hall recounted a similar story that affected her before she came to SDSU. When she was 12 years old, she and her mom were evicted from their apartment and had to live in hotels for the next six months.

Hall went to live with her grandma and, after some complications, ended up living in Father Joe’s Villages, a foster youth center in downtown San Diego. To keep attending her high school, she had to wake up at 5 a.m. each morning and take a two-and-a-half hour bus ride to and from school during her junior and senior year.

“I never expected homelessness, either,” Hall said. “No one does. It’s just something that happens. It really can just come out of nowhere at any age to any person.”

SDSU alumnus and former A.S. President Josh Morse, who graduated in 2014, told the crowd about his struggle while living out of a car with his mom and two sisters and his decision to run away when he was 10 years old.

Morse said it was the toughest decision he ever made, but his life improved when he was taken in by a foster family, who has cared for him for the past 10 years.

Morse is a former member of Guardian Scholars at SDSU, a program that provides guidance and financial assistance to students like Hall who were in the foster care system.

“It’s a great community for people to see other people who are like-minded and have had similar struggles,” Morse said.

The panel discussion last Thursday, moderated by Irma Murphy, communication resource specialist in the health promotion department, was held in conjunction with A.S. and the Economic Crisis Response Team.

Aztecs Rock Hunger is an annual campaign led by A.S. and runs until Nov. 15. The campaign to help San Diego residents with little or no food at home raised 304,000 pounds last year, surpassing its goal of 250,000 pounds.

A.S. has set the goal at 300,000 pounds this year and Dominic Bilotti, executive vice president of financial affairs for A.S., said new initiatives have already given them a leg up on last year’s campaign.

A.S. members are reaching out to various student organizations around campus to collect donations.

Displays on the digital boards around the student union will track the food drive’s progress.

“We’re trying to reduce the number of stops you have to make and the number of times you have to talk to different people,” Calderon said. “By creating the ECRT and having one person as your contact, we’re hoping to alleviate that stress.”

Students in need of immediate food or housing because of an economic crisis can visit the student affairs page online at www.sdsu.edu.