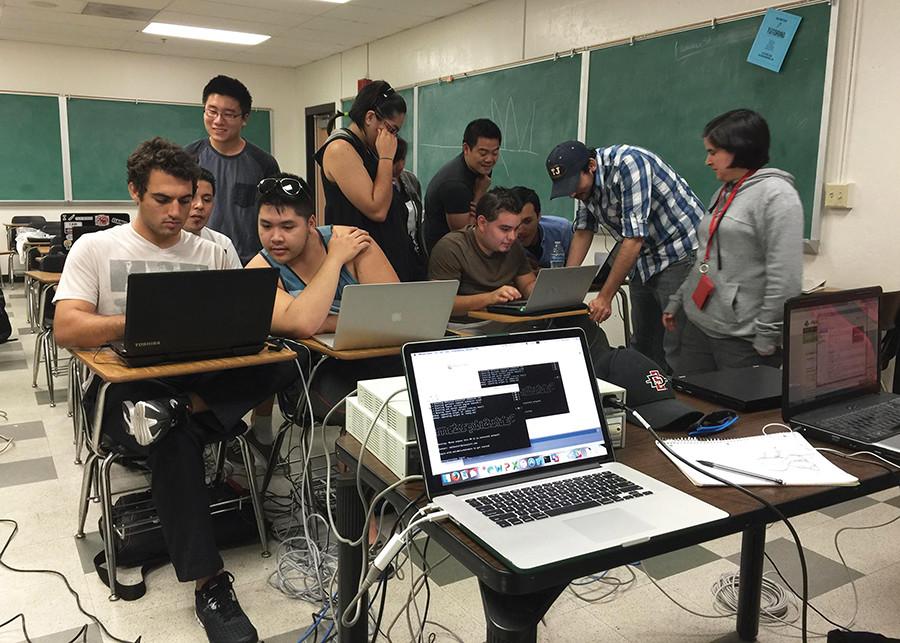 San Diego State students are competing and learning about cyber security through a new campus club.

The group, called the Cyber Defense Team, works on strengthening computer systems to prevent hackers from coming in and doing harm to the sites.

To do this, they have to learn about cyber security from a hacker’s perspective.

CyberFed is an association of academic, industry and government organizations interested in supporting cyber security competitions throughout the nation.

Salerno remembers when Manson came to speak to his class, he mentioned SDSU did not have a cyber defense team and encouraged someone in the class to start it.

Salerno created the club after someone volunteered him to start it.

“I put my email on the board, and the next thing I know I got 150 emails from people interested in it, and I was like, ‘Wow, people actually care,’” Salerno said. “So then over summer we started doing meetings, we got a crew together, and I picked a few officers.”

Salerno picked Danelle Paul, a computer science senior, as the Cyber Defense Team treasurer, after she showed a lot of interest in the club.

Paul said starting the club has been a lot of responsibility and hard work, but it has definitely been worth it.

“The biggest obstacle so far has been taking people that are still learning and trying to take them up to competition level,” Paul said. “It is difficult because there are going to be teams that have been doing this for years, and we just started so we’re still trying to get to know everyone not just on a personal level, but on a completion level.”

The team competes every weekend. Most of their competitions are online and are called “capture the flag.” These competitions are jeopardy-style questions and puzzles that test them on their problem-solving skills and computer science knowledge.

“We do a competition every weekend but not everyone does one every single weekend,” Salerno said. “People sign up for the dates they are available for, and we rent out a room and compete online.”

These are national competitions, which are a different from their weekly ones.

When competing in CCDC, for instance, they have to travel to the competition because it provides the computers and tools necessary to complete the tasks.

The team also has to qualify to make it to higher rounds of this competition.

As of now, the team has 30 active members.

Robert Buchanan, Cyber Defense Team secretary and senior computer engineer, said he has learned a lot since joining this club.

“I have learned that there is actually a lot of work it takes to even try to get into a system that you know is vulnerable,” Buchanan said. “You don’t just sit down start typing away and have the entire internet at your mercy.”

He said his favorite part of the club is the amount of hands-on knowledge he has gained from this experience.

“School teaches theory,” Buchanan said. “This is real stuff we get to do.”