SDSU heads to the Rocky Mountains to take on Colorado State 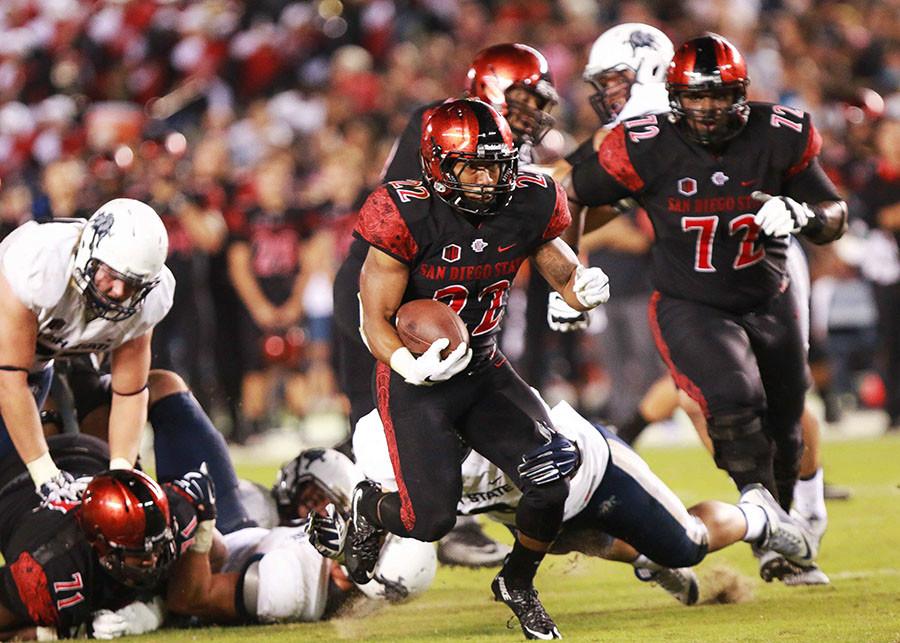 In a season that has seen both its share of tricks and treats, the San Diego State football team looks to extend its four-game winning streak as it heads to Fort Collins on Halloween to face Colorado State.

Just one season removed from a 10-win campaign, the Rams (3-4, 1-2 Mountain West) came into this year with high expectations.  But after a 2-4 start CSU quickly received a wake-up call.

The Rams captured their third win of the season as they convincingly took down in-state rival Air Force 38-23 heading into their bye week.

Whether that week off was beneficial will be determined as they take on a surging Aztecs squad (5-3, 4-0 MW) that has rumbled and bullied its way through conference play behind a stifling defense and a run-oriented offense.

Utah State, which entered last Saturday’s game against SDSU undefeated in MW play, were no exception as it got bum-rushed from the opening whistle to a score of 48-14. Even though USU had the then-No. 6 ranked rushing defense, limiting opponents to 90.8 yards per game, SDSU ran the ball 61 times for 336 yards and five touchdowns.  Four different players recorded rushing touchdowns.

As usual,  junior running back Donnel Pumphrey led the way with 181 yards on 23 carries and two touchdowns.

Even with the build up, national audience and level of play of last week’s victory, the Aztecs are focused on the Rams.

“I think it would be foolish for us not to prepare every week with one goal in mind to be where we want to be at the end of the season,” senior defensive back Pierre Romain said. “You just have to treat each opponent like it’s a championship game every week.”

That preparation and approach has paid dividends for the Aztecs early in games as they have outscored conference opponents 45-0 in the first quarter. These early leads have allowed SDSU to play within its comfort zone and run the ball with great results.

That spells doom for a Rams defense that allows 205 rushing yards per game.

In their four conference games, the Aztecs have possessed the ball roughly 12 minutes and 40 seconds longer than their opponents and SDSU’s rushing offense can be viewed as another layer of defense to opposing offenses.

And against a balanced Rams offense, including All-American junior wide receiver Rashard Higgins, it is crucial for the Aztecs’ offense to continue their run of success.

“I think they have too many weapons on offense to concentrate on one guy,” Long said. “We have to try and keep them all from killing us. The one that gets the most notoriety is their wide receiver (Higgins), who was first-team All-America last year. He’s still really good but they’re spreading the ball around a little bit more than they did last year.”

While the SDSU rushing defense has corralled MW running games to 61 yards per game, it has yet to play against this level of receivers, Long said.

That leads to an interesting matchup of strength versus strength as the CSU receivers will face the secondary of SDSU, including sophomore safety Trey Lomax, returning from a dislocated knee cap, who will play in a backup role.

Last week’s matchup against the Aggies proved turnovers can be the equalizer or lead to a dominating win for the Aztecs.

While the Rams struggle to both force and protect the ball — minus-10 in turnover margin — the Aztecs have not turned the ball over in their last two games and have not thrown an interception since week two.