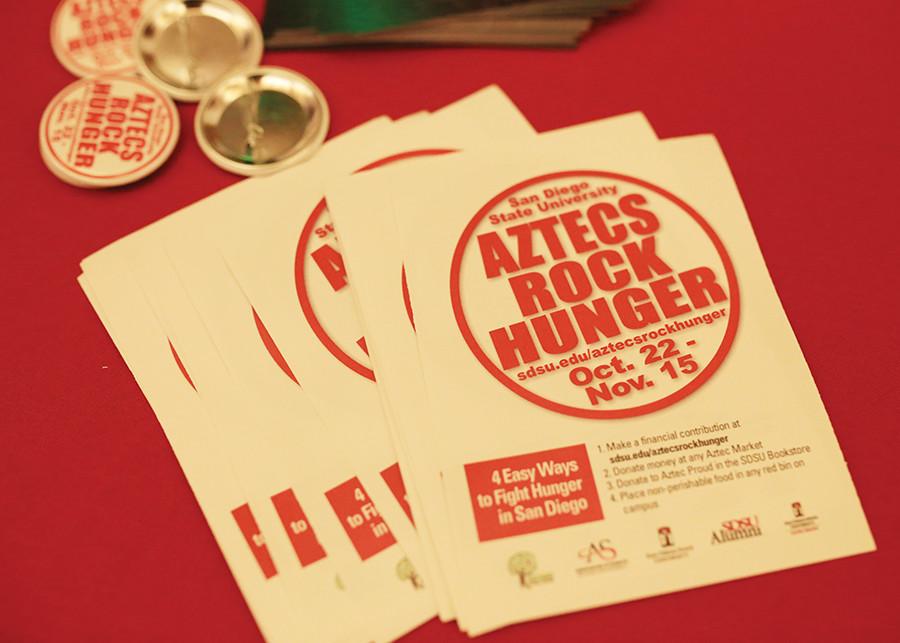 Food insecurity, homelessness and economic crisis have been prevalent topics of discussion on the San Diego State campus.

A family experiences food insecurity when it does not have enough money to buy food for an extended period of time, according to the USDA.

Of San Diego County’s 3.1 million residents, more than 475,000 people, or 15.2 percent, are experiencing poverty in their households.

San Diego County’s high cost of living leaves many individuals in a state of economic crisis, including students at SDSU.

The Economic Crisis Response Team, a task force that launched last month at SDSU, will assist current undergraduate students in a state of economic crisis.

The task force helps undergraduate students find immediate resources to issues such as food insecurity, housing, transportation on a case-by-case basis. Students can access these resources by filling out a response form that will be directed toward the ECRT committee to best assist students.

Chairman of the ECRT Committee and Associate Vice President for Student Affairs Vitaliano Figueroa said the ECRT’s goal is to make sure students know these resources exist and that faculty and staff know they can refer students to the website.

“The website is up now so we want to make sure that students are aware of ECRT and if students, faculty and staff are aware of a student who is in an immediate economic crisis situation that those individuals refer them to the website so we can make sure that we try and help them,” Figueroa said.

He said it’s a short-term solution, but it’s also a step towards getting students what they need to be successful in the long run.

The committee is currently made up of faculty and staff. The ECRT committee initially met last October to come up with a plan to create the ECRT task force. Through ECRT, students can receive immediate support for unforeseen crisis.

Students visiting the ECRT sites can browse through the resources for economic students in crisis choices and click to find the necessary resources. However, many of the resources listed are off campus with some on-campus facilities mentioned, such as Counseling & Psychological Services, Student Legal and Financial Services and the Office of the Registrar.

“It doesn’t seem ideal because if we are talking about students who are already struggling with a lack of resources and are expecting them to go somewhere it’s going to be more of a challenge than for other students,” Elder said. “The bus costs money, gas costs money.”

Assistance from the ECRT is meant to be short term, however, students like Elder want there to also be long term assistance for students.

“I think it’s important to provide for both,” he said. “For one, how do you distinguish between what is short term and long term? At some point you’ll have to make an arbitrary decision. I think it’s important for students not to be disqualified from accessing these services just because their difficulties are lasting longer.”

There are currently no on-campus resources for a large number of cases. But, if there was an immediate crisis that students found themselves in, the ECRT will try and help to the best of its abilities, Figueroa said.

“It would all depend on what the situation is because once a student fills out the form it is sent out to the team and from there we try to realm the request for assistance to the appropriate person,” Figueroa said.

On Tuesday, Oct. 22, the ECRT held a special student panel to discuss food insecurity and homelessness. The event was in partnership with Associated Students and included a panel of Aztecs and former A.S. President Josh Morse. This marked the official launch of the ECRT on campus.

However, some students were upset with the lack of publicity the event received.

Some of the organizations that had protested and called for assistance resources last year were not invited to the event, Diego said.

“It’s certainly good that the ECRT exists,” Elder said. “It’s a step in the right direction, but I think it can be a lot better. I hope that they will continue to improve access so that students will be very aware that these programs exist and hopefully these programs won’t just be for immediate emergencies, but for long term issues.”

The ECRT website contains a disclaimer that notes the university cannot “guarantee the timeliness or type of response a student may receive from any outside source being referenced on this site.”