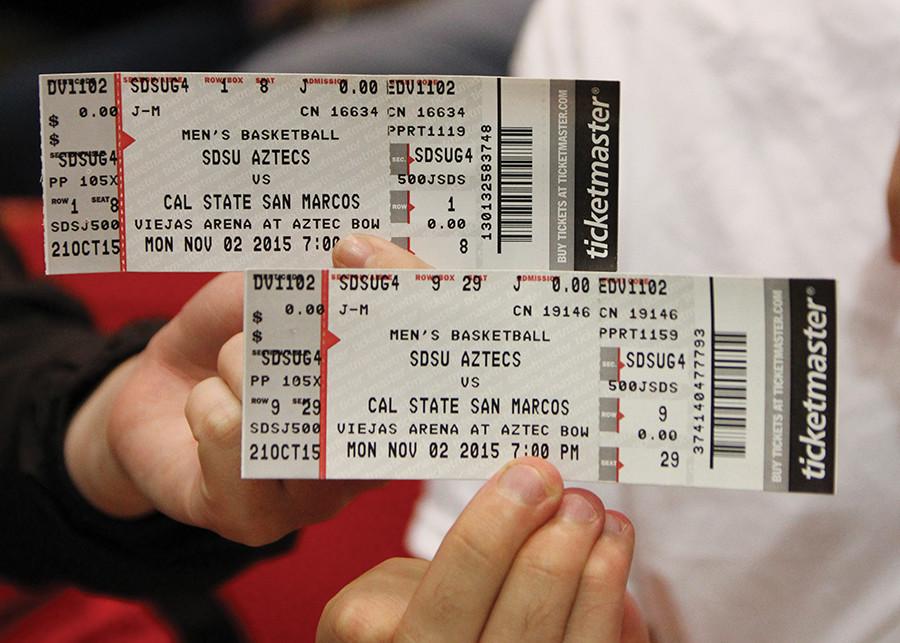 One team in this town has built itself into what San Diego’s professional sports teams have failed to do: becoming the hottest ticket in town.

On game days, Viejas Arena, home to San Diego State’s basketball teams, houses 12,414 rabid fans for men’s basketball games that are led by the most raucous student section in college basketball, The Show.

However, students are put in a tough situation because they’re faced with either securing tickets to join The Show at a home game, or attending classes that conflict with student ticket distribution times.

The SDSU athletic department wants students to get tickets so it can create the environment that national TV broadcasters rave about.

“Students create the excitement for the basketball program in a huge way that the general public follows suit with,” SDSU Associate Athletic Director Steve Schnall said.

The excitement students create starts when they line up for tickets, which Schnall said is similar to other national basketball programs such as Duke University and University of North Carolina.

The cost of student tickets

SDSU has 2,500 tickets explicitly reserved for students. Tickets are available starting at 10 a.m. on seven remaining predetermined distribution dates available on the athletic department website, but students can line up as early as 9 a.m.

Instead the distribution dates commonly land on Mondays or Wednesdays.

In the spring of 2015, SDSU had a total of 788 Monday and Wednesday classes that were scheduled to begin between 8 a.m. and 11 a.m., based on the university’s academic calendar.

Montel Anderson, a business management student, said almost all of his classes are scheduled in the afternoon, but the current distribution schedule presents a problem for students wanting to attend class and get tickets.

“I’m one of those people who are firm on going to every single class,” Anderson said. “So it would be a hassle.”

Schnall said the athletic department uses a real-time metric to measure the length of time from when ticket distribution starts to when the final ticket is collected, and that there are enough tickets available for students who can get to the box office a few hours after distribution begins.

“I would try to go (to get tickets) right after my class, and they would be sold out,” Burk said.

Burk said sometimes he was arriving at the box office within a couple hours of initial disbursement, but still had no luck.

However, this was not the case for Burk’s friend, Paul Andersen.

Andersen admitted to skipping class more than once to get tickets to a game.

He said he made his decision by weighing the upcoming matchup against what was being taught in class that day.

This year, Burk said he intentionally scheduled afternoon classes so he would be available to make ticket distributions.

“Most times we are (out of tickets) within the day for conference games, but certainly it gives students the opportunity to get tickets to most, if not all games,” Schnall said.

However, fans that expect to get tickets to the game against University of Kansas on Dec. 22 might want to temper their expectations of being able to successfully get a ticket if they are not in line when distribution starts.

“I would certainly think we would get rid of those tickets within the first few hours of them being available,” Schnall said.

This year the athletic department has taken steps to decrease the amount of impact ticket distribution has on a student’s schedule.

“I’d like to think by minimizing the number of times we’re doing it (ticket distributions), we are making it more convenient for students,” Schnall said.

SDSU could just get rid of a physical ticket in general.

To eliminate the amount of time students dedicate to retrieving a ticket, the school could use the current Ticketmaster system to put an e-ticket on a student’s Red ID card.

However, problems exist with the way e-ticketing would be set up on the Red ID’s magnetic stripe.

Schnall said e-ticketing is a long-term goal of the athletic department, but right now the system is working just fine and no students complain about ticketing procedures.

At 10 a.m. on Wednesday, Dec. 9, when Kansas tickets are made available, the walk-up ticketing system will be put to the ultimate test.

Students may complain about missing class for a ticket, or not getting a ticket because a student chose to go to class.

“We want to have (the student section) in full force and at full throat,” Schnall said about the home game against Kansas.

Yet at least one day during this fall semester the price of being at “full throat” may come at the expense of missing a full class.