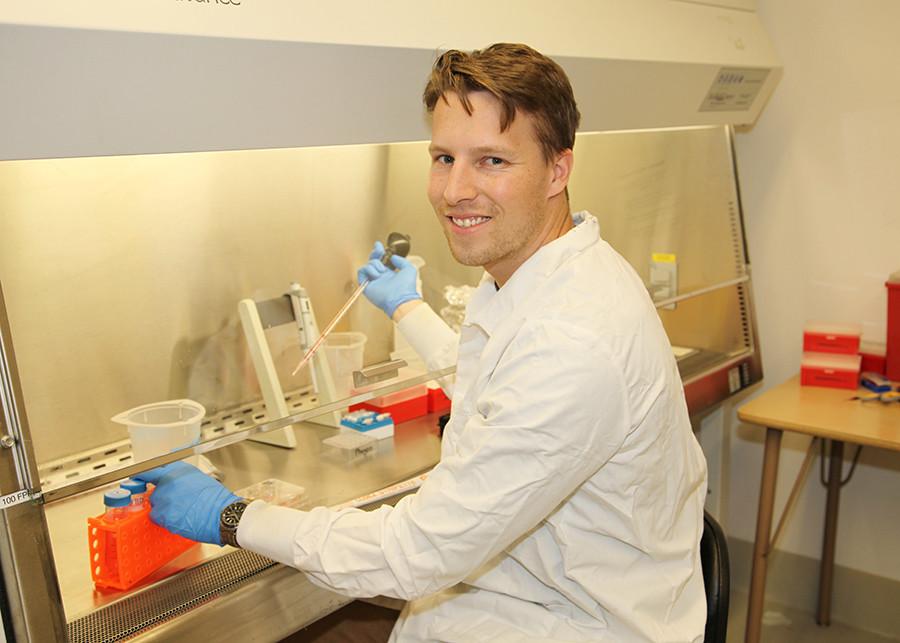 New research from a team of San Diego State scientists has the potential to prevent the spread of dangerous bacteria in the human body. Their work was published recently in the Proceedings of the National Academy of Sciences Journal.

Microbiologist Jeremy Barr and his team have uncovered a previously unknown biological process.

It’s called subdiffusion motion, or the way some viruses, called bacteriophages, move through mucus in the body to destroy bacteria. By understanding how the viruses move, Barr hopes to create new medicine.

“We can use what we have learned about subdiffusial motion to engineer new phages to exhibit this type of motion,” Barr said. “We can potentially infect or kill problem bacteria or even apply the fundamental biology from this research to other particles.”

“If any one type of bacteria becomes abundant or numerous a phage will come and push that back down, thus creating a level,” Barr said.

Barr and his interdisciplinary research group have conducted studies for the past four years observing bacteriophages and their interactions with bacteria in mucus.

“We have worked alongside a great group of SDSU mathematicians, SDSU physicists, and professors and students in the mechanical engineering department at SDSU,” Barr said.

Barr and his team used high-powered microscopes to make the observations. He said the process of subdiffusion motion is a deliberate way for the bacteriophages to hunt down bacteria in the body.

“Subdiffusion motion is diffusing (random particle motion) in a mucus layer and sticking and grabbing hold of mucus fibers repeatedly, which allows them to stay in mucus longer,” Barr said. “This gives them a very specific pattern of movement in which bacteria swims through the mucus layer and phage has better chance of bumping into and infecting a bacteria.”

This type of movement is the result of evolution through natural selection, Barr said.

“Natural selection has caused the phages to evolve forever and we have only just now realized it has evolved into specific phages that are able to hunt and move in this sort of way,” Barr said.

The researchers will continue working to develop methods to treat and prevent diseases found in mucus.

SDSU math professor Antoni Luque is working with Barr and the team to further advance the research.

“We are now trying to figure out what other physical mechanisms make the subdiffusion happen,” Luque said. “If we understand the mechanisms that justify subdiffusion we will have a more specific target in identifying when phages help to eliminate the bacteria that tries to penetrate the mucus and how we could optimize that to produce the best benefit of the phage’s protection.”

He said this discovery is a stepping to stone to further research and raises more questions regarding bactriophages and animal and human cells.