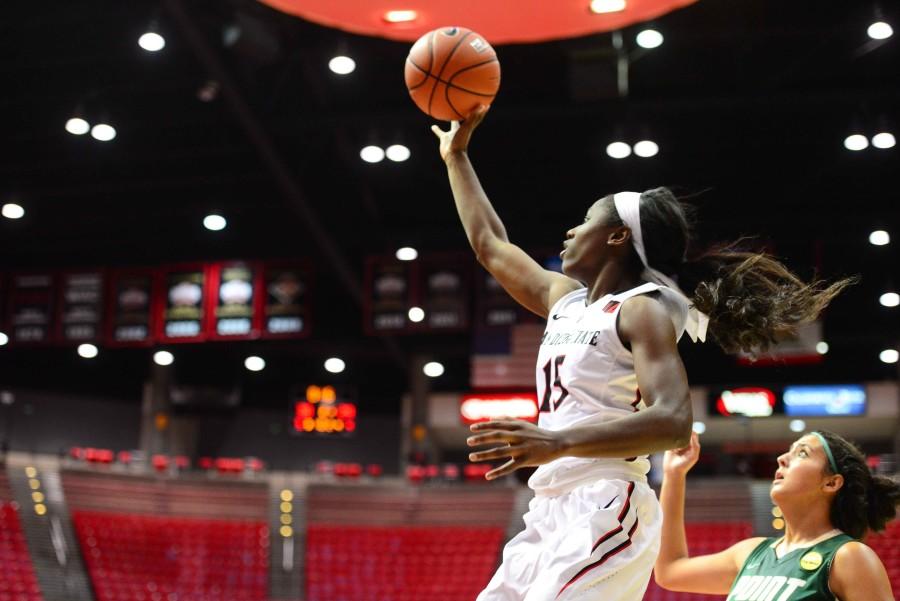 “I love the little things (Gomez Ferrer) does,” head coach Stacie Terry said. “She is a really good rebounder and I’m looking forward to bigger and better things from her.”

SDSU went 12-19 last year under Terry, who is entering her third year.

The Aztecs pressed from the start of the game, which was their first experience playing four 10-minute quarters and caused four turnovers in the first five minutes, jumping out to a 16-10 lead with 4:36 left in the first quarter

Rustamzada scored the first 10 points of the game for Point Loma, but the first quarter ended with the Aztecs leading 23-12. They held Point Loma to 31-percent shooting in the first quarter and caused seven turnovers. Junior guard Arrielle Bostick led SDSU in scoring after the first half with seven points.

In the second quarter, Point Loma sophomore guard Alex Brunk hit a 3-pointer to cut the Aztecs’ lead to 25-20 with 6:40 left.

Gomez said her role on the team is primarily as a rebounder, but she is looking to improve her outside shooting and play more physically.

Senior guard Ahjalee Harvey hit a 3-pointer with 52 seconds left and sophomore guard McKynzie Fort hit two free throws to bring the lead to 40-29 at half. The Aztecs had 19 of their 40 points come from bench players and shot 45 percent for the half.

Gomez led SDSU with eight points and the Aztecs had four players with five or more points at the end of the half. Rustamzada led all scorers with 14 points on 6-8 shooting.

“We’re not going to have someone averaging 20 points a game,” Terry said. “I want five players scoring 10 (points) a game.”

The Aztecs were able to extend their lead to 61-50 at the end of the third quarter with a flurry of scoring from senior forward Deidra Smith. Rustamzada led Point Loma in scoring with 17 points and Smith led  the Aztecs with 14 points.

Smith said she didn’t mind playing quarters and it felt more like the professional game.

“We just have to get used to the breaks and utilize our timeouts,” she said.

SDSU endured the runs made by Point Loma in the fourth quarter and the game ended 76-61 in favor of the Aztecs.

“We have kids that are capable shooters so we just have to get them in the gym and keep shooting,” Terry said.

The Aztecs head out on the road to take on Cal State Long Beach next Friday, Nov. 13, at 7 p.m.