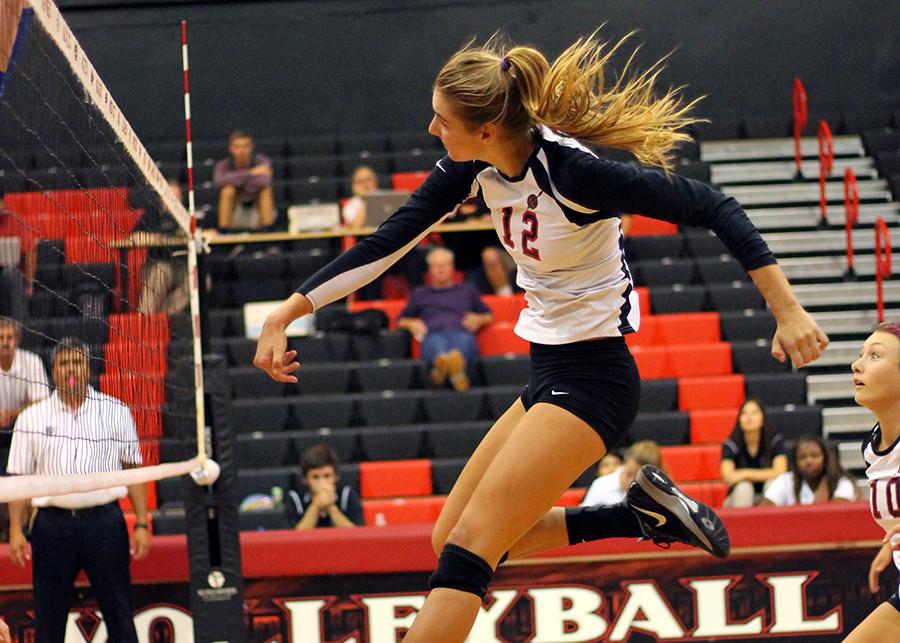 On Saturday night, the San Diego State volleyball team scratched out the win against visiting rival UNLV in three straight sets in their second meeting of the season.

After dropping their first match against UNLV on Oct. 8 in Las Vegas 3-1, it was a different story this time around for the Aztecs. While none of the sets were easily won, SDSU was still able to shut out UNLV 3-0.

“It wasn’t so much about them than just our progression throughout the semester,” head coach Deitre Collins-Parker said. “Confidence in ourselves (has been progressively getting better).”

The Aztecs looked in command early on, not relinquishing the lead after initially going down 1-2 in the first set until the score was 15-15, highlighted by a long rally ending with a missed spike by UNLV and a point in which SDSU spiked the ball, only for it to be popped right back for a second spike for the win.

However, following some miscommunication, the count was pushed to 15-16, where Collins-Parker then called a timeout.

“The team just responded at the timeout and didn’t let things compound,” she said. “We didn’t let them get too many points in a row on us.”

It seemed to work, as SDSU was able to tie the score up at 23 apiece, where another timeout was called. After the ensuing five points and a 26-24 win in the first set, the Aztecs found themselves up 1-0 heading into the second set.

By the score alone, the second set was the easiest one for SDSU, winning it 25-22.

The third and deciding set, however, was the opposite.

Opening up the last set, the Aztecs immediately fell behind UNLV 1-6. After a timeout, they  found more consistency and brought it back to 10-11. Despite the initial resurgence with little time and opportunity left, SDSU found themselves against the wall at 14-20.

“We started falling short of what we know we could do,” junior middle blocker Baylee Little said. “We just talked about how we needed to come together and play how we have in the past.”

The Aztecs followed the break with a 6-3 run to push the score to 20-22 before a UNLV timeout halted play once again. SDSU didn’t let it faze them, continuing on with a 5-1 run to win the set and the match 25-23 on a kill by sophomore outside hitter Alexis Cage.

UNLV had dominated at home this year going 10-1, but the same story of struggling on the road continued as they fell to 2-8 away from Las Vegas.

Little lead the team with 11 kills, while Cage had the second most at 10. Cage and freshman setter Lauren Utchen each led with 10 digs. Redshirt-freshman middle blocker Deja Harris had four blocks, and sophomore setter Hailey Jones rounded it out with a team-leading 24 assists.