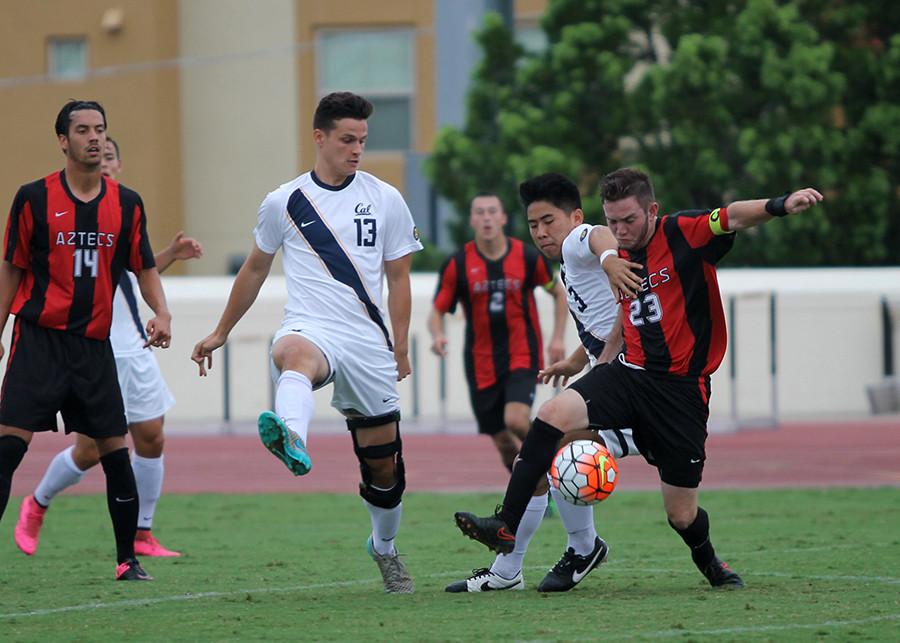 Despite dominating for most of the second half, San Diego State men’s soccer dropped its second-to-last match in the regular season 3-1 against Oregon State on Sunday at the SDSU Sports Deck.

The Beavers began dominating early on in the match, and their first chance to score came in the fifth minute.

Oregon State senior midfielder Mikhail Doholis took a right corner kick and sent the ball to sophomore forward Jordan Jones. Jones then headed the ball, but fell off short as it went slightly past the left of the net.

However, in the 12th minute, Jones received another opportunity to score. Freshman forward Don Tchilao controlled the ball and kicked it directly to Jones, who then drove it past SDSU redshirt freshman goalkeeper Nedin Tucakovic into the left of the net to take the 1-0 lead.

Fighting back, SDSU attempted to tie in the 41st minute. Senior defender Mark Revell took a free kick and found redshirt-junior defender Travis Nicklaw positioned a couple of yards outside the box.

Nicklaw struck it toward the center of the net, but OSU sophomore goalkeeper Nolan Wirth was there for the save.

Thirty seconds later, Jones obtained his second goal of the day and extended the Beavers’ lead to 2-0.

In a stressful play inside the box, Oregon State junior midfielder Zach Striar located Jones and set up a goal while Tucakovic was outside of the net. Jones took a high header, and the ball went straight into the net without anyone there to block it.

The first half ended with Oregon State outshooting SDSU 7-5.

The Aztecs entered the second half set on scoring and with new energy.

“I think (head coach Lev Kirshner’s) talk during halftime got things going,” sophomore midfielder Ozzie Ramos said. “And from then on, the guys just rolled through.”

A minute into the second half, sophomore forward Jeroen Meefout snuck past the backline and passed to redshirt senior Rene Reyes from the right side of the box. Reyes shot the ball to the left of the net, but Wirth stopped it with a diving save.

Less than seven minutes later, SDSU had a free kick outside the top right corner of the box. Ramos aimed directly at the left of the net and shot the ball past Wirth’s reach to put the Aztecs up on the scoreboard.

“It was an important goal because it got the momentum going for the boys,” Ramos said.

SDSU continued to dominate for most of the second half with their offense attacking and pressuring.

However, with less than six minutes left in the match, the Beavers secured their 3-1 victory. Tchilao received the ball from Jones 10 yards out and sent the ball past the backline into the far left corner of the net.

Ramos played all 90 minutes and scored his second goal of the season and in his collegiate career.

The Aztecs will finish off the regular season against UCLA on Nov. 14 at the SDSU Sports Deck.

“I think, mathematically, we’re out and have no chance of making the (NCAA) tournament, but myself and the rest of the guys are prideful players,” Ramos said. “We’re going to take the (UCLA) game seriously. We have a week to prepare, and we’re gonna do everything we can to get a result.”