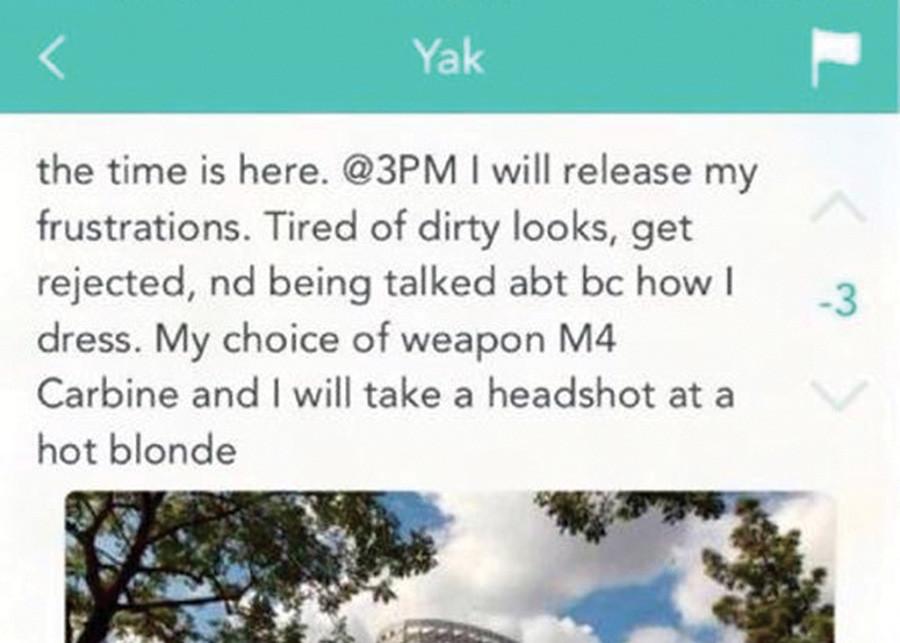 Following an anonymous threat to Fresno State on Yik Yak on Nov. 2, the San Diego State Police Department assessed how it would handle a similar situation.

“the time is here. @3PM I will release my frustrations. Tired of dirty looks, get rejected, nd being talked abt bc how I dress. My choice of weapon M4 Carbine and I will take a headshot at a hot blonde”

SDSU Police Department Sergeant Steven Harshaw said although SDSUPD tries to monitor social media as much as it can, there is a limit.

“We would like to monitor social media more fervently but we, nor any other agency, do not have the staffing to monitor as heavily as we would like,” he said.

Police rely on students, faculty, staff and the community to report suspicious activity to them.

If people notice someone who is exhibiting signs of frustration or psychological issues, it should be reported, Harshaw said.

One of the issues with modern communication technology is the false assumption that people are not held accountable when communicating on social media, Harshaw said.

“We treat threats on social media as real threats,” he said. “We cannot afford to not take it seriously.”

Rachael Record, assistant professor of communication, said social media users do not have a limit as far as what messages they communicate using social media.

“When we think we are anonymous, it affects our behavior,” Record said. “We say things we would not otherwise say if our name or faces were attached to it.”

She said users choose social media platforms based on the message they want to communicate, and some people are willing to say anything.

SDSU kinesiology student Saidee Espinoza said the Fresno State student probably posted the threat on Yik Yak because he thought no one would find out he was the one posting the threats unless he told them.

“What I do not understand is what pushes a person to get the point of thinking that making a death threat is OK,” Espinoza said. “There are resources that students can access on campus for help. Why didn’t he reach out to them?”

Harshaw said any threat reported to the police is taken seriously and followed up on as much as possible.

In addition, SDSUPD prepares for future threats to avert any danger before it occurs, Harshaw said.

“Law enforcement is always under the gun trying to answer the question of what they are doing to prevent danger from occurring,” he said. “The SDSUPD provides resources for anyone who would like to attend trainings to better prepare themselves on how to operate in dangerous situations.”

Police try to educate the community and students by giving them the tools needed to empower them, Harshaw said.