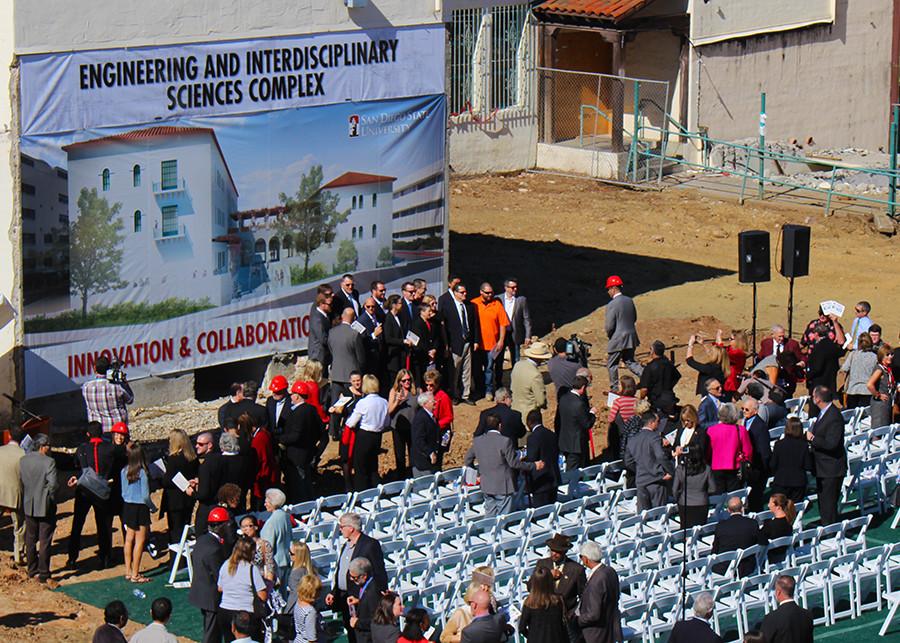 The five-story complex is the latest of SDSU construction projects and is scheduled for completion in January 2018.

The 85,000 square foot EIS complex will connect the physics, physical sciences and engineering buildings and will feature 17 research facilities for principal investigators.

Each lab will have a faculty researcher from more than one college to encourage collaboration between disciplines.

“This is important because there are really important problems in the world that you can’t solve from engineering alone or science alone,” Dean of Sciences Stanley Maloy said. “It’s this collision between the disciplines that will allow us to attack problems we couldn’t attack otherwise.”

This is an effort to combine scientific and engineering talents with entrepreneurship. Maloy said entrepreneurship plays a key role because without it the products scientists and engineers develop wouldn’t reach the general public and wouldn’t have much of an impact on people’s lives.

Dean of Engineering Morteza Mehrabadi said the complex is the engine that will boost SDSU into the top 50 of public research universities.

“To get to where we want to be, we need to attract the best and brightest graduate students, undergraduate students and also outstanding, very qualified faculty and the EIS complex will definitely help us do that,” Mehrabadi said.

He said a team of faculty, deans and students met nearly every week to discuss what kind of facilities should be built in the complex.

The new facilities will double the amount of instructional space available for engineering and include a Viromics Institute, Smart Health Institute and an imaging laboratory for brain research.

Maloy said he is most excited about the shared spaces such as the coffee station, U-shaped quad and whiteboards in the hallways that will all promote collaboration and interaction.

The EIS complex will be a LEED-certified building, meeting the same standards as the Conrad Prebys Aztec Student Union, South Campus Plaza and the recently renovated Zura Hall.

The renovation of Zura Hall began May 19, 2014 and was completed Aug. 20 of this year, which Associate Vice President of Real Estate, Development and Planning Robert Schulz said was a quick completion for a project of its size.

“(Zura) was a brilliant success,” he said. “I wouldn’t call it normal at all. It was an awful lot of work done awfully quickly, and the team did a fabulous job.”

Schulz said a collaborative design build method was used to complete the project in time, meaning they selected the architect and the builder as a design build team so the builder was involved in the design process.

South Campus Plaza and the EIS complex are both collaborative design contracts.

Schedule incentives were also used to ensure Zura was completed in time for move-in day, and Schulz said his department looked at the track records of the construction companies up for consideration when choosing who would get the job for the Zura renovation.

“The trouble with student housing is if you’re late by a month you might as well be late by a year,” he said.

Schulz said his department spends a lot of time looking at long-term enrollment projections and tries to plan for housing needs 10 years ahead.

Students and faculty can track the progress of the South Campus Plaza and EIS complex construction via a live camera that is always streaming on the SDSU website.