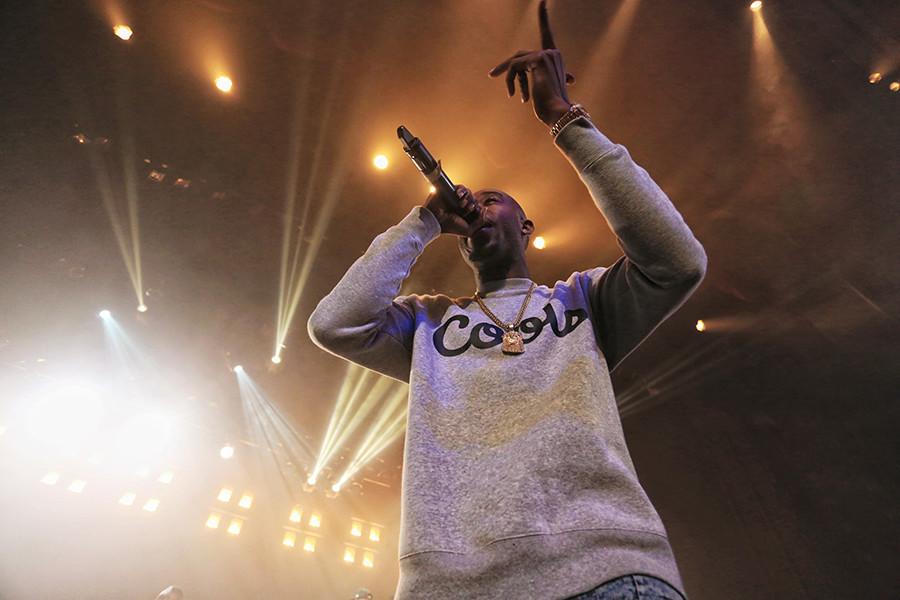 After many years of contract limbo with labels such as Master P’s No Limit and Lil Wayne’s Young Money, Curren$y went independent. He then proceeded to release a series of seven mixtapes in eight months before signing another deal, later releasing his studio album debut, aptly titled “This Ain’t No Mixtape.”

Hailing from Gary, Indiana, Freddie Gibbs is most known for his 2014 collaborative studio album “Pinata” with hip-hop icon and producer Madlib. The album received rave reviews and featured artists such as Earl Sweatshirt, Scarface and Wu-Tang Clan member Raekwon, among others.

After two opening acts, Gibbs’ uncle came out to introduce his nephew in a drunken speech before Gibbs entered bouncing to his 2013 hit “Lay It Down.” The crowd soon followed suit.

Gibbs’ spitfire flow was just as clear as his recordings. Before every song, he would perform the first verse entirely a capella, showing off his incredible sense of rhythm and breath control.

The only problem with Gibbs’ set was the length, which consisted of just nine songs. Of the 45-minute performance, the highlight was “Thuggin’,” his first single from “Pinata,” or his feature from Atlanta rapper Young Thug’s song, “Olde English.”

Curren$y walked out at 9:45 p.m. after a short wait. The crowd was immediately on his side, jumping around and rhyming along to every lyric.

His catalogue is large to say the least, with 32 mixtapes and 11 albums. With so much material, he was surprised the audience knew every word.

Curren$y’s set lasted a little more than an hour. The highlight of his show was either the first song on his most recent album, “Pilot Talk III,” “Opening Credits,” or the 2009 hit “Elevator Musik.”

After cruising through songs on a few projects, he asked if he could perform a few songs on his upcoming album.

“This is the Canal Street Confidential tour after all,” Curren$y said.

He played two songs from the album and went back to a few fan favorites before ending the concert. However, he also announced he was going to hang out on stage for a little while after and listen to the music with the crowd.

The only disappointment with the show was that Gibbs never came out to perform with Curren$y. They have a number of songs together, and it surely would have been a moment to remember.