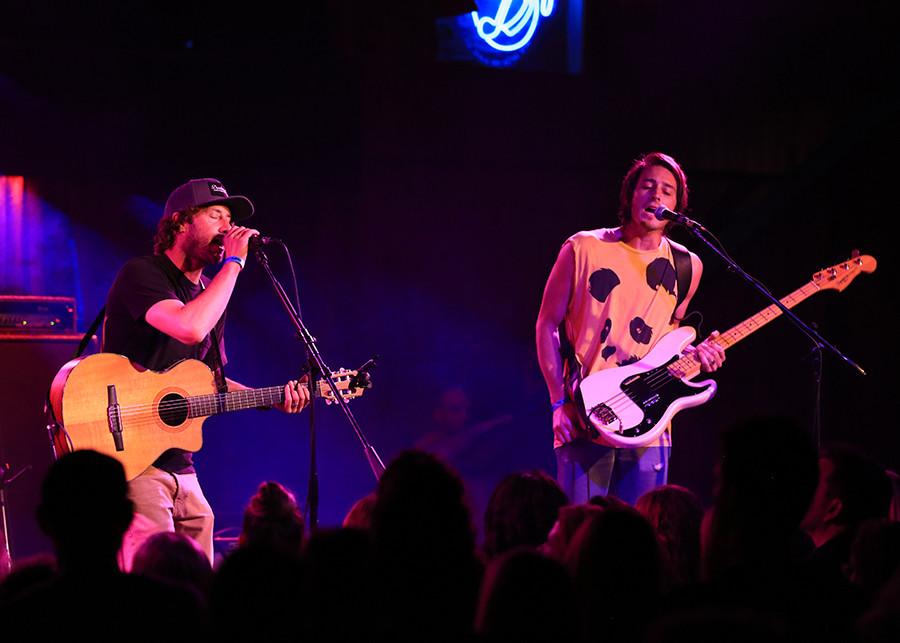 All funds raised by musicians and the surfer crowd went to the Rob Machado Foundation and its ongoing projects to educate and empower young people to make sustainable and eco-friendly choices.

The foundation had spent the last year reaching out to musicians, some of who reached out to help the foundation on their own.

“Everybody’s just sort of friends of friends,” Aoun said. “They are here for the foundation and happy to help out.”

Entertainment was well-received by the craft-beer-drinking Californian crowd in support of the RMF.

Opening artist Timmy Curren and his friends played an elevated set, flowing with Jack Johnson-inspired beach sounds. At one point, the members of the band huddled around one drum set and played together with dramatic bass blasting in unison to Curren’s vocals.

Brett Dennen, a 6-foot-4-inch folk and pop songwriter with thick glasses, cherry-red hair and a childlike voice, was a crowd favorite through his brilliant performance of soothing and meaningful songs.

Andrew Wesson of Grouplove played his first live solo acoustic performance, interchanging between guitar and ukulele instruments throughout the set. Song lyrics revolved around acts of skinny dipping and living life without holding back, a theme similar to that of his band. The set ended with Wesson catapulting himself into a jump kick off of the drum platform and proceeding to flee backstage.

“The energy is above anything else,” audience member Chris Keplar said.

Singer-songwriter Matt Nathanson worked the crowd both through his music and humor. His famous song “Come on Get Higher” fell into the mix of the set as a duo performance with lanky musician and friend Dennen. Harmonizing and jiving alongside each other, their routine was spontaneous and experimental.

“There are few people I love more than this man,” Nathanson said. “Watching him play is like watching someone make sweet, sweet love.”

The final set of the night brought all musicians onto the stage, including Rob Machado himself, and the intimate setting of the Belly Up Tavern allowed for all to be involved in the music. Covers were unplanned, and every musician took turns with instrumental and vocal solos to hype the crowd.

“They really killed it on (their cover of) ‘American Girl,’” Solana Beach resident Dave Fazio said.

The night fared well with an auction of two-hand-shaped surfboard by Rob Machado and two guitars signed by all the artists. The sales were a grand total of about $13,000, not including funds from ticket and T-shirt sales.