Students bond over appreciation for anime 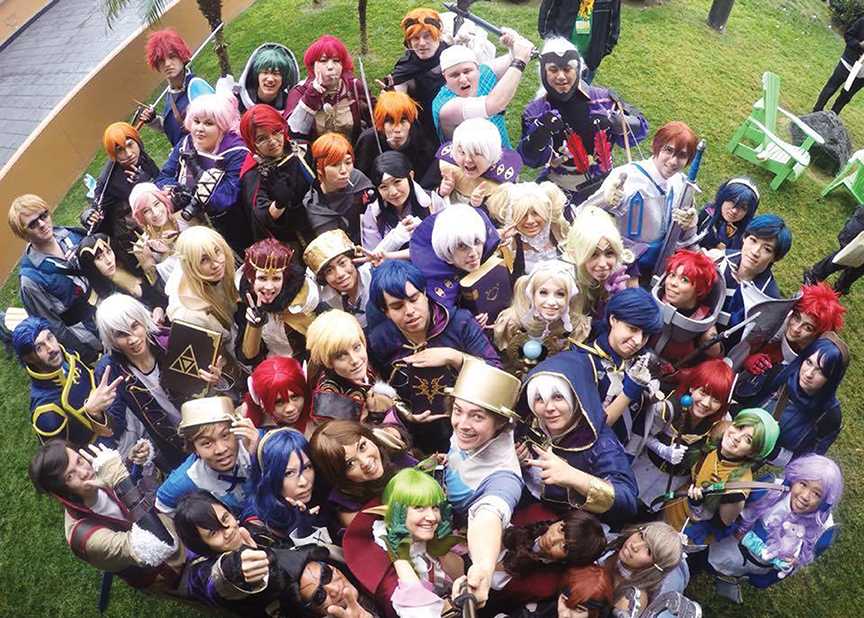 Whether it’s cosplaying as Goku from “Dragon Ball Z” or a member of the Survey Corps ready to defend humanity against giant Titans, some San Diego State students enjoy the lively, imaginative world of anime and manga in their spare time.

The Anime and Manga Club on campus celebrates Japanese animations and comic books while providing a fun, friendly environment for students to share their similar interests.

Regular meetings are from 3:30 to 4:30 p.m. every Friday in room 132 of the Conrad Prebys Aztec Student Union. During meetings, students share and watch a new series of anime each week, followed by friendly conversation that in many cases leads to members bonding over their love for these stories.

“It’s kind of nice having events like the club or an anime convention where you know everyone around you likes the same thing you like and that there’s no judgment there,” computer science freshman Ashley Lopez said. “I feel a lot of people are instantly comfortable and it’s really easy to just talk to someone.”

Undeclared freshman Anna Bowman said she initially got into anime because of its unique, aesthetically pleasing art styles, such as the adorable chibi style.

Chibi style, also known as “super deformed” style, consists of characters usually having large heads, huge round eyes and small, unproportioned bodies. Bowman said the style is one of the easier anime styles to draw.

Anime and manga art branches out into several different artistic styles that range from the more colorful and action-oriented styles to darker, scarier and more grotesque tones.

“The art style is just really expressive,” Lopez said. “It’s less about trying to look like a real person and trying to look more like what we feel.”

While Japanese anime definitely has a strong fan base and components of detailed, beautiful art, Bowman said there are several contrasts from Western animations that won’t appeal to everyone.

“It definitely is not for everyone because the writing style is really weird to get into at first,” Bowman said. “It’s either very slow and dialogue-heavy or very manic as opposed to Western animation, (which) has a lot more movement and a lot more plotlines going on, but it makes sense.”

A common hobby among students that love the world of anime and manga is cosplaying at some of California’s most notable pop-culture conventions. Cosplay, an abbreviation for “costume-play,” is a frequent act by comic book fans to elaborately dress up and represent some of their favorite characters. Fans cosplay at conventions such as the famous San Diego Comic-Con International, Anaheim’s Anime Expo or Los Angeles’ Stan Lee Comikaze Expo.

Like many other cosplayers, Lopez said she sews and paints her own costumes and also makes the occasional accompanied weapons out of Styrofoam or paper mache with a hot glue gun and several carpentry tools.

“Hot glue is a best friend of cosplayers everywhere,” she said. “It’s just exciting to live as one of the characters that you love.”

Cosplay photo shoots are another entertaining part of the cosplay, anime and manga fan community.

Lopez said many of the photographers that attend the conventions are professional photographers and have adapted their photography and editing styles to compliment and capture the fun community.

Anime and Manga Club member and economics senior Tommy Newton said he also loves to cosplay and has dressed up as Marvel’s “X-Men” superhero Wolverine and “Attack on Titan” main protagonist Elmer Fudd.

“This generation seems to love celebrating our childhood,” he said. “It is very common now to see people wearing shirts with Disney characters or popular cartoons from the ‘90s like ‘Teenage Mutant Ninja Turtles.’ The movie industry integrating with the comic book industry is a big part of it.”

Newton said sometimes the costumes don’t turn out as perfect as desired but that doesn’t matter: Fans enjoying themselves and having fun is what cosplay is all about.

This pop subculture is known for open, friendly and passionate fans that make any convention feel like a big costume party.

“There’s something for everyone,” Lopez said. “Anyone should try watching it because even if you don’t like one anime, another one won’t be the same.”