SDSU Women’s basketball looks to part with the ‘red sea’ 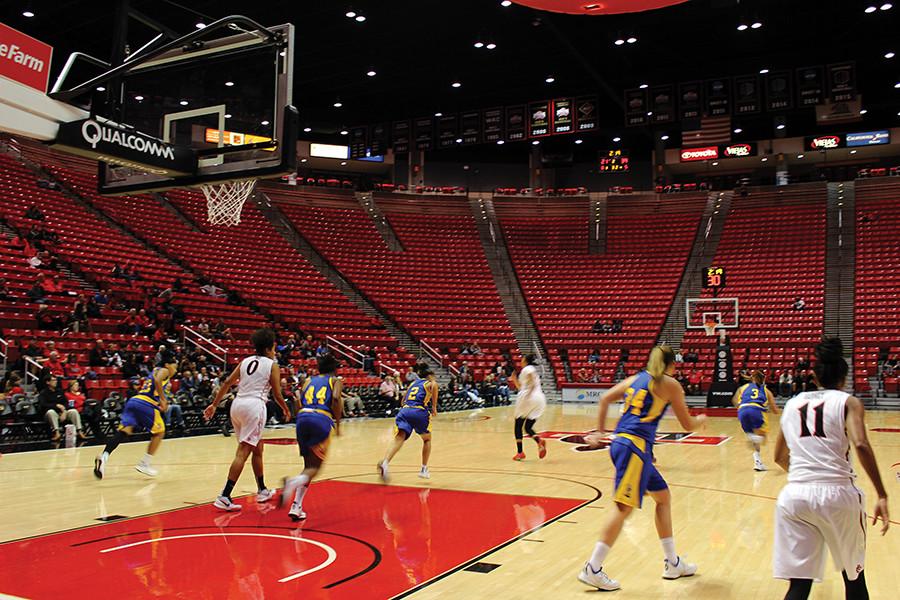 There is one constant in photos of the San Diego State women’s basketball team playing at Viejas Arena in recent years: the red sea.

Not the body of water, but the sea of empty red seats in the background of photos.

The Aztecs went 12-19 overall last season and averaged around 604 people at each home game. The men’s basketball team, by contrast, went 27-9 last season and has averaged a sellout attendance of 12,414 people since 2012.

The raucous student section known as The Show at SDSU has largely been a no-show at women’s basketball games.

Todd Greenbaum, director of marketing, sales and fulfillment at SDSU, said the disparity in attendance between men’s and women’s basketball games is a nationwide problem that marketing departments are trying to correct.

Several giveaway nights are planned for women’s basketball home games this season and specific promotional nights are targeted to different groups of fans.

Greenbaum said the most effective promotion each year is National Girls and Women in Sports Day, during which they invite children to mini-clinics put on by the women’s volleyball, tennis and golf teams at SDSU.

Athletics marketing directors around the MW have a monthly conference call during which they discuss which marketing strategies are most effective for each sport.

“Women’s basketball is a topic every call because it is (an entire) MW issue,” Greenbaum said.

Both of those numbers were a decline from the previous season.

Nick Popplewell, assistant athletic director of marketing at Colorado State, said the MW instituted a Women’s Basketball Marketing Team of the Year award for this year to encourage marketing departments to focus on women’s basketball and increasing attendance.

He also sent out a women’s basketball marketing toolkit with marketing strategies including branded roster cards, autograph signings after games and ball kids rebounding for the players during warm-ups.

Popplewell said the marketing toolkit gives marketing departments a good chance at growing its fan bases and he has seen it work at numerous places.

One place that hasn’t struggled for attendance at women’s basketball games is the University of New Mexico, with an average home attendance of 5,168 last season (average of 14,571 attended UNM men’s games).

That’s around 2,000 more than the next highest MW school, University of Wyoming, with an average of 3,228 per game.

UNM marketing manager Jon Washington said the team has a large following of fans mostly in the older demographic.

“We have a fan base that has been around a long time,” Washington said. “A lot of the same season-ticket holders return every year.”

He said he balances his marketing efforts to students and the surrounding university population by having the women’s basketball players travel to the homes of some season-ticket holders to hand-deliver their season tickets and has the players hand out tickets to their games to students on campus.

Popplewell said he likes to get the team of student-athletes out in the community to gain support for the program.

“(Social media) is important, but people need to get to know people,” he said. “That tie, that relationship is really what drives attendance.”

Greenbaum said he thinks the SDSU women’s basketball team is making strides in getting more community members to come to the games.

He even moved back starting times for weekday games to 6:30 p.m. from 6 p.m. in an effort to make it easier for fans to make it to games.

Head coach Stacie Terry is entering her third year with SDSU and brought in a new staff of assistant coaches when she was hired.

The Aztecs’ former head coach, Beth Burns, resigned in 2013 under some controversy and filed a lawsuit against the university in February 2014.

The lawsuit alleges Burns was unlawfully terminated following an incident in which she struck an assistant coach twice during a game.

Burns resigned as the winningest coach in SDSU women’s basketball history and led the team to a program record of 27 wins in 2012-13 season.

Women’s basketball attendance reached a peak during the 2008-09 season when games averaged 1,281 fans. The attendance has been in an overall decline since that season.

The goal for the marketing department is to see a 10-percent increase in overall attendance for the season and Greenbaum said he has already seen an increase in the number of season tickets sold this year.

The next home game for the Aztecs is Thursday, Nov. 19, at 6:30 p.m. against UC Davis, during which they will be looking to turn the tide on their season and stem the tide of the red sea.