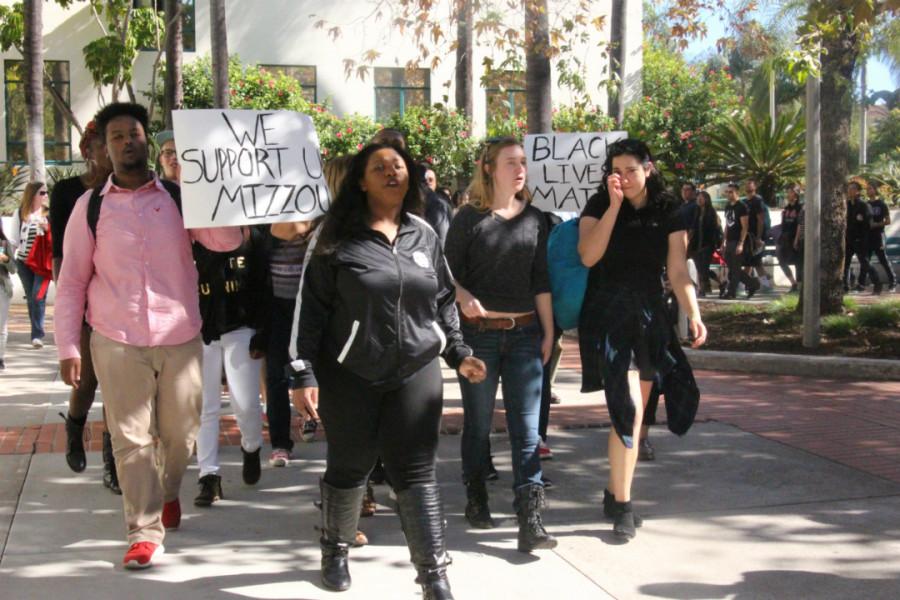 The Africana Studies Major and Minor Association, Concerned Students and other San Diego State student organizations coordinated a rally Thursday in solidarity with activists at the University of Missouri.

The “Black Collegiate Solidarity Demonstration” involved students across the country voicing concerns over a variety of racist incidents handled ineffectively by administrators at Missouri.

“We owe solidarity to Missouri State University-Springfield, and all black students nationwide as we fight administrative neglect, abuse of power and a lack of adequate resources,” said Zakkiyya West, SDSU Africana studies major.

West said the event was important because it showed SDSU’s support for Mizzou and gave people a chance to have their voices heard.

“Minorities need to stop being afraid and start speaking out,” West said.

SDSU psychology major Rajane Deviugt said she hopes this event can be used as a stepping stone toward social equality.

“We need to create equality on campuses across the nation to promote an environment where we all feel safe,” Deviugt said.

Faculty, staff and students came together at noon and shouted a variety of supportive chants across campus and in front of the iconic Hepner Hall.

Demonstrators said they are showing the world they support each other as they stand in solidarity with their brothers and sisters at Mizzou even though their university won’t stand behind them.

Criminal justice major Daja Brewer said this demonstration united the campus community and that taking action against injustices is an important priority.

“I am going to stand my ground tomorrow and shoot every black person I see,” the anonymous post said.

The University of Missouri student responsibly for posting the message has since been identified by authorities.