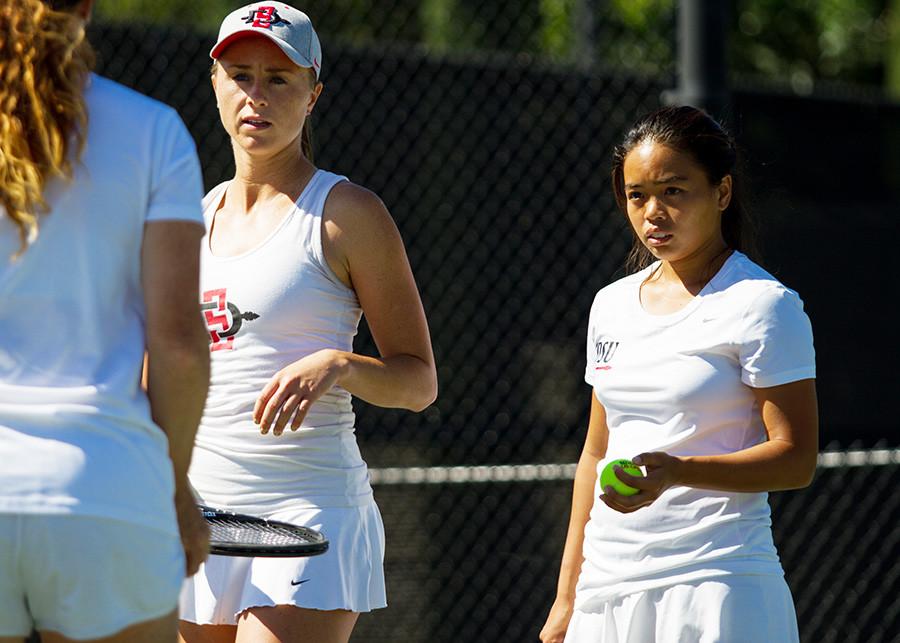 Although the San Diego State women’s team season doesn’t start its season until the spring, it has a lot to play for in the SDSU Fall Classic II this weekend.

The team has posted two solid performances in back-to-back tournaments. The first saw the Aztecs earn 13 victories, including junior Kennedy Davis and senior Tami Nguyen making it to the final of their respective draws in the first SDSU Fall Classic.

The Aztecs’ second tournament, the ITA Regional, hosted more than 100 players across the country. Nguyen had the most success yet again, making it to the quarterfinals and defeating No.114 junior Zoë Katz of USC.

But that result overshadowed an overall improvement for the team.

“I thought we took a pretty significant step forward from the first Fall Classic,” SDSU head coach Peter Mattera said. “But more than our wins and losses, our level of play was a definite step forward so we’re hoping to do that again at this last one.”

Although it was a great performance, senior Isabelle Hoorn has seen more development in the practices following the tournament.

Some of that “stuff” Hoorn referred to is point play.

Since the tournament, there has been strong focus on situational points. It varies from player to player, but for Hoorn it was her mentality and return game.

“My own (service) games I’m very confident (in), and there’s never really any trouble,” Hoorn said. “But for me to start off a point (with) the same (confidence) in return game that’s a big step and I think I made a big one these past couple weeks.”

The Aztecs have also been working on finding the best doubles partners.

Mattera hasn’t found the right doubles teams yet, but he thinks mixing and matching different players will be beneficial come the regular season.

“It seems to be going good not only because we’re still tinkering to find the perfect combinations, but also, the reality of it is there’s no chance that we’re going to go through the spring without somebody being able answer the bell on a given day,” Mattera said. “So, you have to have some familiarity and be able to handle whatever is being dealt to you.”

He added he is fully confident in his doubles talent and the team will be trying out some new combinations in the upcoming tournament.

“A lot of these teams we won’t see in the spring, so it will be nice to measure ourselves against some of the players from other schools,” Mattera said. “It’s nice to have some variety.”

That variety will pose various challenges for SDSU, but the players are prepared for what they hope is their best tournament of the fall.

“My goal is to put into practice what I’ve been working on the past couple weeks,” Hoorn said. “I think I’m at a point now (where) I feel more confident than I’ve been the last few years. I feel that it could be a good tournament.”

Mattera hopes this tournament can help lead the Aztecs into a strong winter.

“I’d like to take another significant step forward from the regionals,” Mattera said. “I’d like everybody to leave this event with a very clear vision of what they need to continue to work on and stay with for the next two months.”