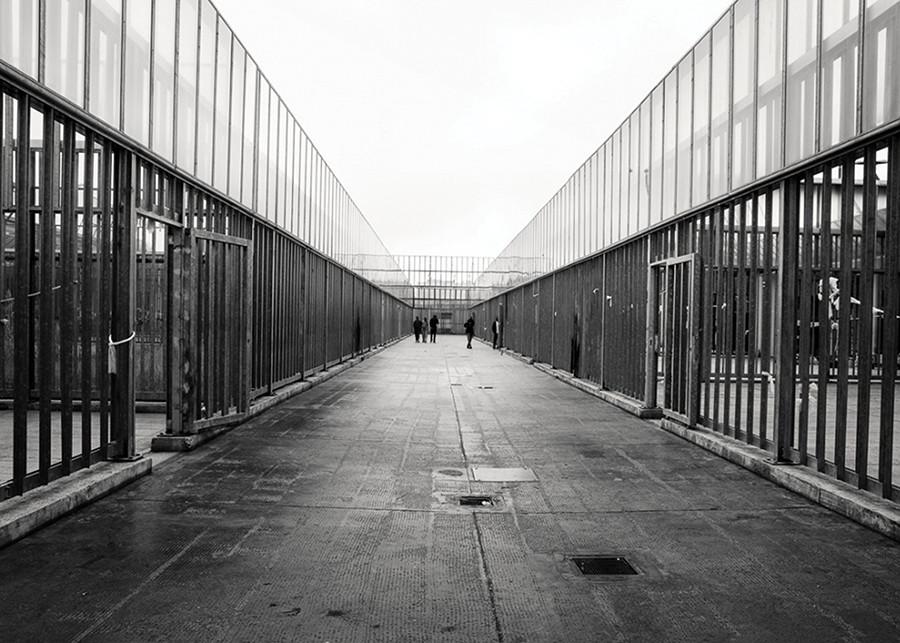 Beginning in mid-November until fall 2016, San Diego State will host a photography exhibition in the Love Library that emphasizes aspects of the migrant condition.

The exhibition, called “The Energy of Migration in Captivity: A View from Italy,” will display 31 photographs from award-winning Italian photographer Mario Badagliacca’s 2014 collection “Letters from the CIE.” The photos portray the struggle of migrants from different backgrounds detained in Centers for Identification and Expulsion in Italy.

Funded by SDSU’s Common Experience program, the exhibition curator is Dr. Clarissa Clo, associate professor of Italian and director of the Italian Studies program at SDSU.

“With Clarissa Clo’s contribution, we’re thinking of energy now as kind of this constrained energy if you put people in detention centers who could otherwise be active members of society,” said Jose Preciado, director of Academic Engagement Programs. “(The exhibit) provides an opportunity for students, faculty and the whole campus community to look at this and look at these experiences, and to see that these migrant situations are happening in different places and different contexts around the world. It brings to light that maybe we need to start thinking about human movements in a different way than we have in the past.”

Clo began the initiative for the exhibition last year after reading an article in Italian newspaper La Repubblica about one of Badagliacca’s solo projects displayed at St. Andrews University in Scotland. Less than a month later, after attending a conference on colonialism and migration in Italy, she was put in touch with Badagliacca. Plans for a curation of Badagliacca’s “Letters from the CIE” at SDSU were put into works at that time.

Clo, a scholar of migration among other topics, brought the initiative to SDSU’s Common Experience in hopes of making a connection to the classes she currently teaches that cover Italian migration.

The exhibit will focus on a situation not widely publicized and will bring visibility to the conditions that migrants face in Italy when they are detained in CIEs.

According to Badagliacca’s description of his project, the common demographic of CIE detainees are migrants who have been living in Italy for many years and, after losing their jobs, cannot renew their residence permit. If stopped by the police, they are detained in the CIEs and sent back to their country of origin. In many cases, they are separated from their families and children who were born in Italy.

“This is a phenomenon that has not been covered in the media, that has sort of been kept a part from civil society,” Clo said. “Unless you know someone (who has been affected by the CIEs), it’s not something that you’d find out on your own because they are kept away from city centers.”

Clo said when she began the process of looking for funding and putting the exhibit together a year ago, there was no way of knowing that the refugee crisis in Europe would have grown to the extent it is at now.

Along with the Common Experience, Clo was interested in putting the exhibition on at SDSU in order to make a connection between the current refugee situation in Europe and San Diego, a border region itself.

“We are living in a border region, and we always want to think in relation to other border regions,” Clo said. “I would say that migration is the condition of 20th and 21st centuries, and so we want to pay attention to a phenomenon that is not going away.”

Clo went on to say wishing people away cannot be the solution.

Migration has been a part of the human experience since its inception. “The Energy of Migration in Captivity: A View from Italy” exhibition will provide a platform for students and the SDSU community as a whole to see how the energy associated with migration can be wasted when it is constantly perceived as a crisis situation.