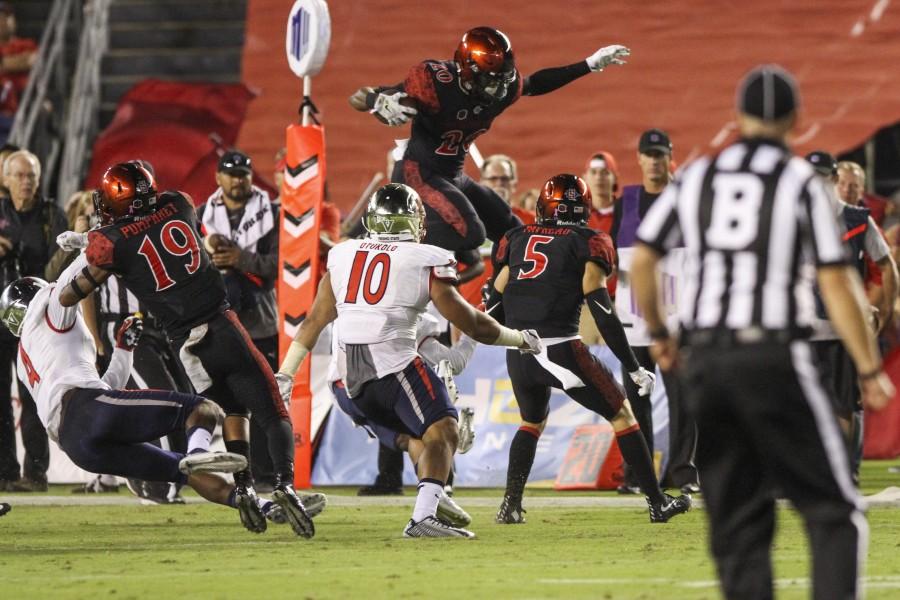 Teams in the Mountain West are now face-to-face with their last opportunities to make a push for the MW Championship game. The Utah State-Air Force and San Jose State-University of Nevada games could all but solidify the final two teams in the MW championship game.

MW football is usually not that exciting, but this is the week to pay attention to four of the six games being played. As always look out for the Bad Name Bowl games.

This is the most interesting game in the conference because Air Force needs to win to keep pace with Boise State on top of the Mountain Division, and Utah State needs a win to remain in striking distance of Boise State.

The Falcons are playing a similar brand of football as San Diego State. They run the ball well, although the Falcons use the option, and pass when necessary. This, coupled with the seventh-best defense in the country, makes for a bad day at the office for Utah State.

Both of these teams are tied for second in the West Division. Nevada needs to win this game SDSU to lose to University of Wyoming to have a chance of winning the West.

San Jose State needs to win out and pray for catastrophic failure from the Aztecs and Wolfpack. Nevada does just enough on offense, but it’s a middle-of-the-road defensive team that will have trouble containing SJSU senior running back Tyler Ervin.

Bad name bowl game alert: From now on, refer to this game as “The Last Chance Bowl.”

Despite what others may say, UNLV is a program that is trending up. The Rebels have lost three of their last four, and are 1-3 against the spread in their last four games, but they are not as bad as their record indicates.

Colorado State’s inconsistent play still confuses me, and I am not prepared to say they will win by more than a touchdown.

New Mexico further solidified its place as the best worst team by beating Utah State in an ugly 14-13 win that likely ended SDSU’s chances of hosting the conference championship game. The Lobos will try to repeat the lightning strike with their running attack, but Boise State will likely stymy any attempt to run the ball with its fourth-best run defense.

The Broncos have let me down by not covering these massive point spreads, but they are bound to cover one of them, right?

University of Wyoming at SDSU (-24)

SDSU is riding a hot streak, but its hiccup in the first half against Colorado State was a bit concerning. Fortunately, the Aztecs stepped on the gas and rode the victory into a bye week.

Wyoming is getting back senior quarterback Cameron Coffman this week, and the Cowboys feature the No. 2 running back in Football Bowl Subdivision football in sophomore Brian Hill.

Twenty-four points is a little bit rich, so I pick the Aztecs to win, but I’m not taking the points. Wyoming will cover in a close one.

Fresno State at University of Hawaii (-4.5)

Last week Hawaii played its first game after head coach Norm Chow was fired. The Warriors lost. I guess he wasn’t the problem. The Warriors are bad because they are in the bottom 10 of FBS football in total offense and total defense.

On the other hand, Fresno State has been brutal this year. Second bad name bowl game alert: From now on, refer to this game as the “’You Couldn’t Pay Me to Watch This’ Bowl.”

This is not gambling advice, nor meant to encourage gambling.