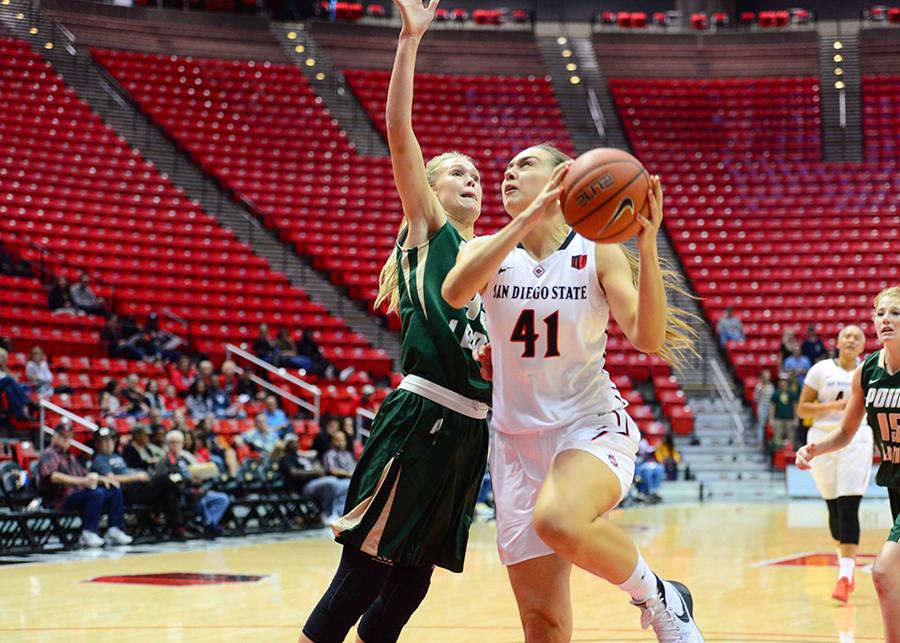 Long Beach State’s women’s basketball team has been historically dominant over San Diego State and Friday’s game at the Walter Pyramid failed to reverse the trend as the Aztecs lost 74-54.

The 49ers entered the game with a 36-5 all-time record against SDSU and improved that mark with a 20-point win in which they never trailed.

“This is a great test for us, to open up the season on the road,” head coach Stacie Terry said after practice Wednesday. “You can’t play this team from behind, they’re very good. You get in a hole it’s going to be hard to get out of. Our mentality on the road is staying focused, opening with some fire and being competitive for the 40 minutes.”

At this point in the first quarter the Aztecs had four points and four turnovers. Turnovers plagued SDSU all game. The team finished with 21 compared to 11 for LBSU.

“They do a good job of picking up full court and making you play faster than you would want to, forcing you into some turnovers,” Terry said Wednesday.

A couple 3-pointers helped SDSU close the gap to 23-10 at the end of the first quarter, but the 49ers ended the quarter shooting 9-of-15 from the field.

LBSU showed no sign of slowing down in the second quarter and extended the lead to 37-22 at half while shooting 48 percent.

SDSU sophomore guard McKynzie Fort, the leading scorer for the Aztecs last season, was 0-for-4 on field goals at half and finished with eight points on 3-of-8 shooting.

Junior guard Kymberly Ellison provided a spark off the bench with six points on 2-of-2 shooting from 3-point range in the first half.

The second half didn’t tell a different tale for the Aztecs as turnovers and poor shooting allowed the 49ers to build a 27-point lead with 1:19 left in the third quarter.

The Aztecs closed the gap to 16 points late in the fourth quarter, but it wasn’t enough.

Ellison continued her good shooting the rest of the game. She led the Aztecs in scoring with 11 points and shot 3-of-4 from 3-point range while the rest of the team finished 3-of-15 from beyond the arc.

The Aztecs shot 21 percent from 3-point land in their exhibition against Point Loma Nazarene University and 32 percent to start the season against LBSU.

LBSU junior guard Jewelyn Sawyer was a thorn in the side of the Aztecs all night and had a career game, scoring 20 points with eight rebounds after averaging just two points per game last season.

Junior guard Raven Benton and junior forward Madison Montgomery both scored 13 points and the 49ers shot an even 50 percent from the field for the game.

The Aztecs had a 2-11 record on the road last season.