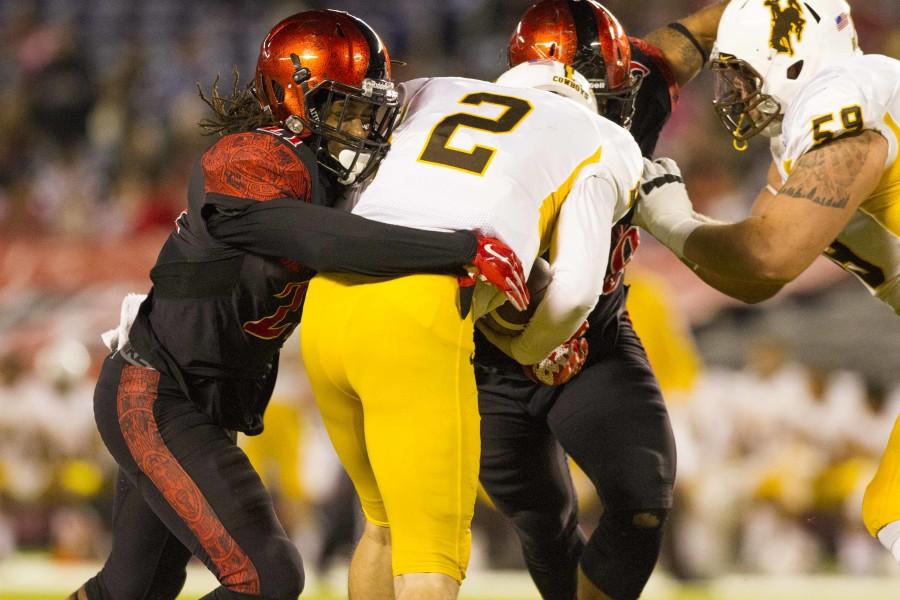 The San Diego State Aztecs have watched their Sunday co-tenants and have brought semblance back to Qualcomm Stadium by thoroughly crushing their opponents at home.

The visiting University of Wyoming Cowboys were just the latest team to experience the might of the Aztecs within their concrete jungle as the Cowboys suffered a 38-3 defeat.

The Cowboys would not leave without a fight as they forced uncharacteristic SDSU miscues, highlighted by two Aztec turnovers — their first since junior running back Donnel Pumphrey fumbled against University of Hawaii over a month ago.

Both turnovers ended two promising drives for the Aztecs deep in Wyoming territory and prevented an even larger blowout that SDSU (7-3, 6-0 Mountain West) has grown accustomed to in conference play.

SDSU’s defense was the story of the night as it pitched a shutout in the first half, ending all five Cowboys’ possessions in punts and forcing two turnovers in the final two quarters.

“I thought that they played fast and they should have played fast after a bye week,” SDSU head coach Rocky Long said. “When you play fast it is tougher on the other team.”

And it was tough for the Wyoming (1-10, 1-6 MW) as the Aztec defense tallied 10 tackles for loss and five sacks — two by junior defensive lineman Alex Barrett — to run the Wyoming offense off the field.

However, what probably is the best testament to how well the defense played is limiting the No. 2-ranked rushing leader in the country, sophomore running back Brian Hill, to 72 yards on the ground on 20 attempts.

Wyoming can hang its hat on the fact that the Cowboys were the first team to keep Pumphrey out of the end zone for the first time since the Aztecs’ matchup against UC Berkeley back in September.

However, other players for SDSU made up for the loss of production from the star back. Senior running back Chase Price took care of the rest of the rushing duties and ended the night with two rushing touchdowns.

Graduate transfer quarterback Maxwell Smith had a career night as an Aztec, completing 12-of-19 passes for 138 yards and three touchdowns.

The second half saw more of the same from the first as the Cowboys were too slow on the draw and were easily subdued by the Aztecs.

Pumphrey began SDSU’s second drive of the game with a bang as he rushed to the right sideline only to be met by four Cowboys, break out of the scrum and pick up 28 yards.

The combination of Price and fellow senior fullback Dakota Gordon would cap the drive off as Price hit pay dirt on a 4-yard touchdown run to go up 7-0.

Wyoming had its best drive of the half on the ensuing possession, as senior quarterback Cameron Coffman found junior wide receiver Jake Maulhardt for a 24-yard pickup. However, the Aztecs sent the Cowboys reeling backwards as Wyoming lost 7 yards on the next three plays.

Smith used SDSU’s third drive of the first quarter to warm up his arm on a cool San Diego night. The Aztec quarterback went 3-of-4 on the drive with a beautiful back-shoulder connection to Holder for a 25-yard gain on a third-and-6.

Later in the drive Holder beat one-on-one coverage to the outside and Smith off of a play-action found his favorite receiver to go up 14-0.

“When we huddled up coach Horton already had (the play) in mind and Max kind of validated it,” Holder said. “It was a good play call and set up very well with the play action. You know we were running really well on them and Max put it in a good spot for me.”

The Cowboys corralled the Aztecs for majority of the second quarter, including a fumble by junior wide receiver Eric Judge on the Wyoming 10-yard line.

But the Aztecs broke out on their final possession after a muffed punt by Wyoming’s freshman Andrew Wingard placed them on the Cowboys’ 24-yard line.

A personal foul and a Pumphrey 11-yard reception led to another Smith-to-Holder touchdown hookup. Holder reached into his bag of tricks and caught a leaping pass over a Wyoming defender in the corner of the end zone.

With the win the Aztecs become bowl eligible for the sixth straight year — the longest streak in school history.