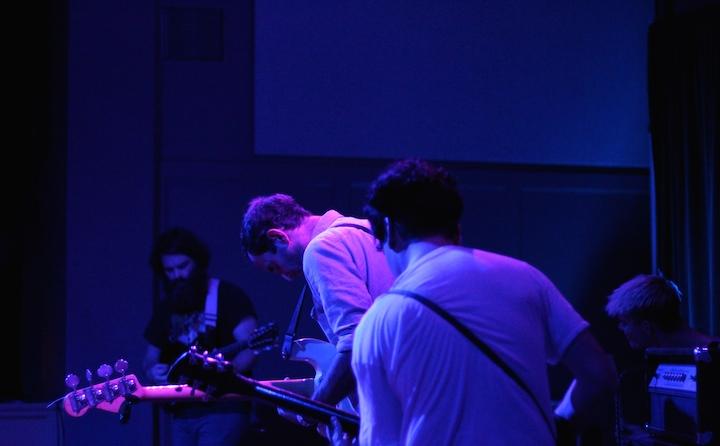 The eighth annual San Diego Music Thing, a music and media conference, was held from Nov. 12-14.

Produced by local non-profit group the San Diego Music Foundation, the event included more than 80 musical acts at various venues around San Diego and two full days of panelists and guest speakers at the Lafayette Hotel in North Park.

Held on campus in the Templo Mayor suite of the Conrad Prebys Aztec Student Union on Saturday, Nov. 14, the boot camp was guided by Storm Gloor, a University of Colorado, Denver professor of music and entertainment industry studies.

Topics covered included everything from marketing and branding to career planning in the music industry. Gloor encouraged students to stay diligent in perfecting their craft and emphasized that overnight fame is not always best. Instead, he recommended students focus on artist development as a way to eventually gain career longevity.

SDSU alumna Despina Coca, who graduated in 2015 with a bachelor’s degree in television, film and media, found Gloor’s boot camp to be insightful and said learning about music licensing was particularly interesting.

“I liked the end of (SDMT-U) and how (Gloor) gave us career advice, like to always have a plan B and to keep your options open,” Coca said.

Along with the music conference on Thursday and Friday, which included panels and featured speakers such as Matthew Logan Vasquez from Delta Spirit and Greg Graffin from Bad Religion, SDMT also put on a bustling music fest.

San Diego Music Foundation intern Azul Sanchez put in countless hours alongside other foundation members to make sure SDMT ran smoothly. She said she learned a lot about the logistics behind putting on a conference similar to South by Southwest.

“It was fun to see how the event came together,” Sanchez said. “Everybody seems to know everybody in the music industry in San Diego and I think the music scene is growing super fast here.”

The Irenic was the go-to spot for SDMT’s all-ages shows. The renovated church venue was a temporary home base on Thursday, Nov. 12 to bands such as the post-punk group formerly known as Viet Cong and local act Mrs. Magician.

George Nelms, drummer of local country group The Jackstones, was in the crowd Thursday. He said while the two groups were great, he was disappointed the opening band, Gateway Drugs, failed to make an appearance.

Mrs. Magician’s unique surf punk sound rocked the crowd with songs such as “Nightlife” and its closing tune “Dead 80’s.” The band’s set was lighthearted and ironic given the venue’s history, most notably as the band members smiled cheekily while singing the song, “There is No God.”

The artists formerly known as Viet Cong — they have not yet announced their new name — ended Thursday night with a set that left the crowd in a trance. The band’s musical talent was apparent with long instrumental verses that pulsated through The Irenic’s walls.

SDMT wrapped up Saturday night at The Irenic with No Age, an experimental punk duo based in Los Angeles. The band was the perfect ending to SDMT’s all-ages shows, with a foot-stomping set featuring songs such as “Eraser” and “Fever Dreaming.”