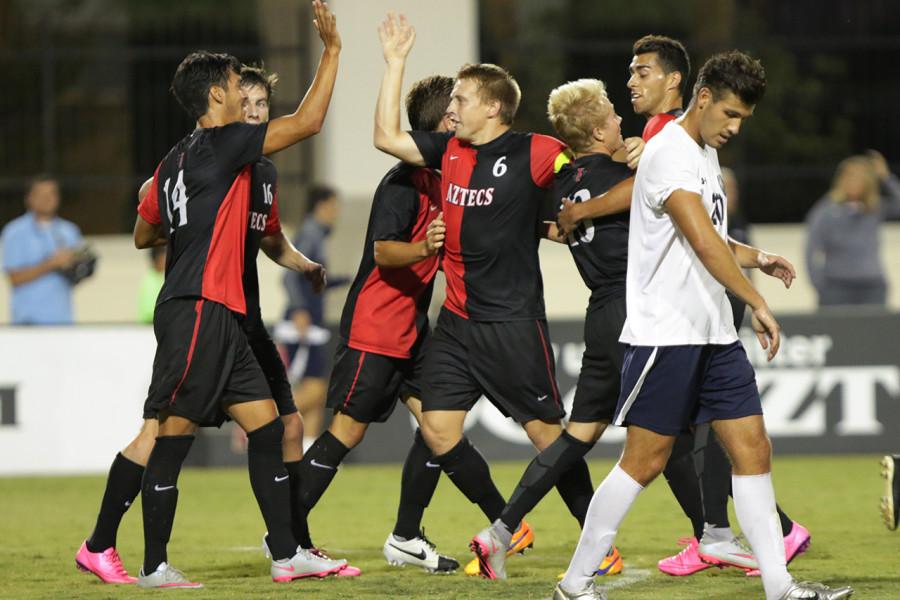 On Saturday night, San Diego State men’s soccer did something it hadn’t been able to do in Pac-12 play this season.

It pressured, attacked and defended for the full 90 minutes and in double overtime in its 1-0 victory against No. 16 UCLA at the SDSU Sports Deck.

“This was an unbelievable team performance,” head coach Lev Kirshner said. “The character and the work ethic that was necessary to beat a team of this caliber was at the highest level, and we sent the seniors off on a great note and a wonderful memory.”

UCLA outshot SDSU 13-8, but the Aztecs’ exceptional backline was there to block everything.

The Bruins began to pressure early on, and their first opportunity to score came in the first minute.

UCLA sophomore forward Abu Danladi shot the ball 25 yards out from the left, but it went slightly past the right of the net as redshirt-sophomore goalkeeper Adam Allmaras dived for it.

Fighting back, SDSU sophomore midfielder Ozzie Ramos took a free kick 25 yards out from the left in the 26th minute. He located and sent the ball to sophomore midfielder Ernest Reyes who then passed it to redshirt-senior forward Rene Reyes in close range of the net. Reyes shot, but his attempt was blocked by UCLA junior goalkeeper Juan Cervantes.

In an attempt to continue the momentum, SDSU remained compact and attacked offensively in the second half.

In the 76th minute, redshirt-sophomore midfielder Dallin Cutler dribbled the ball from the halfway line. He passed to junior forward Luke Ackermann who then drove it back to Cutler, but his attempt was too high as it went over the left of the net.

Less than three minutes later, UCLA freshman forward Stephen Payne controlled the ball and chipped it from the top right side of the box. Ernest Reyes dived, slid and kicked it out.

Because of their outstanding defensive performance, the Aztecs went into double overtime.

The first period of overtime was a battle between defenses.

In the 10th minute of overtime, Danladi took the ball, snuck past the backline and sent it toward UCLA senior forward Larry Ndjack. Allmaras got to the ball before Ndjack and snatched what could have been the Bruins’ winning goal.

Less than two minutes later, Ramos kicked the ball from 5 yards outside the box toward the left of the net. The ball bounced off of sophomore midfielder Brady Blackwell and into the net to give SDSU its 1-0 victory.

“Last time we played against UCLA, our pressure was too high,” Ramos said. “We left too many gaps in the midfield, and that allowed them to put the goals in. This time, we stayed really compact, and that’s what we worked on all week.”

“I think the guys showed a lot of character,” Ramos said. “Everybody went all-out, and we sent off the seniors right.”

They finished with a 1.37 goals-scored-against average.

SDSU outshot 10 of its 17 opponents this season and has the most evenly distributed offense in Pac-12 with 13 different players having scored.

“We are a team that’s going to play together,” Kirshner said. “There wasn’t any player that just dominated the game. It was every player playing very well for one another. We can’t be more proud of that effort against UCLA”