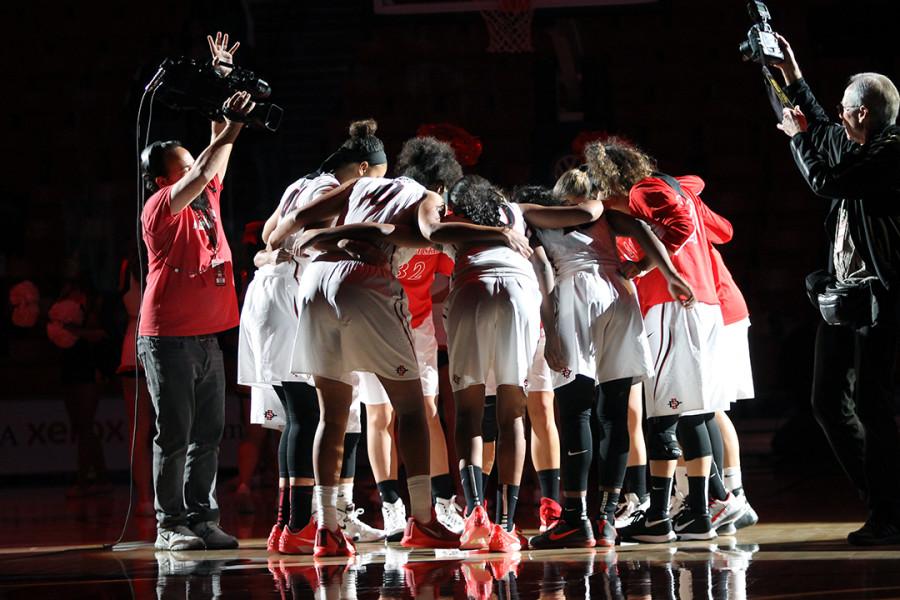 SDSU fell 65-54 Thursday night at Viejas Arena against UC Davis for its third consecutive loss to start the season and its third straight loss to a Big West opponent this season.

Three games into the season SDSU is still searching for the team that scored 76 points in an exhibition win against Point Loma Nazarene University.

Head coach Stacie Terry said the team has shown her in practice that it can perform, but hasn’t been able to translate it to the games.

“We are still really young in a lot of positions and we are going to take some growing pains early, but this is a team that is very talented and I think that when we finally can get it together we are going to be a tough team to play against,” she said.

The Aztecs have been off to a slow start offensively, scoring 61 points per game and shooting 37 percent from the field and 30 percent from 3-point range coming into the game.

The Aztecs shot 33 percent from the field and were 1-for-11 from 3-point range in the first half. They finished shooting 4-for-23 from long range.

Without a consistent deep scoring threat the Aztecs have struggled against zone defenses this season.

The Aggies employed a 2-3 zone then a 3-2 zone to cut down on the penetration by SDSU’s guards.

Sophomore guard McKynzie Fort said the team needs to stop being passive offensively and attack the gaps in the zone to create more space on the floor.

The Aztecs fell into an early deficit for the third consecutive game and were in a 14-5 hole with 5:01 to go in the first quarter.

After shifting to a 2-3 zone, themselves, the Aztecs were able to close the gap to 14-10, but sophomore forward Pele Gianotti caught fire for the Aggies and UC Davis ended the quarter with a 19-12 lead.

The UC Davis lead fluctuated for the the next two quarters until the Aztecs were able to cut it to four points with 9:48 left in the game. Their momentum didn’t last long, though, and the Aggies had the lead back up to 10 by the six-minute mark.

UC Davis rode that momentum the rest of the game to a 65-54 win.

The Aggies entered the game averaging only 49 points a game, but turned it around and scored 65 points on 44-percent shooting against SDSU.

The Aztecs were led in scoring by sophomore guard Geena Gomez with 13 followed by Fort and junior point guard Ariell Bostick.

Bostick said if the team plays better defense, pushes the tempo with its press and starts making shots it can beat anyone in the Mountain West.

She said she is looking to help the team accomplish this by becoming more of a vocal leader on the team.

“I have to spread my energy around and I feel like I’m still learning to do that,” Bostick said. “I’m not as vocal as I need to be.”

The Aztecs are 0-3 on the season and take on the University of Washington Huskies Monday at 7 p.m. in Seattle.