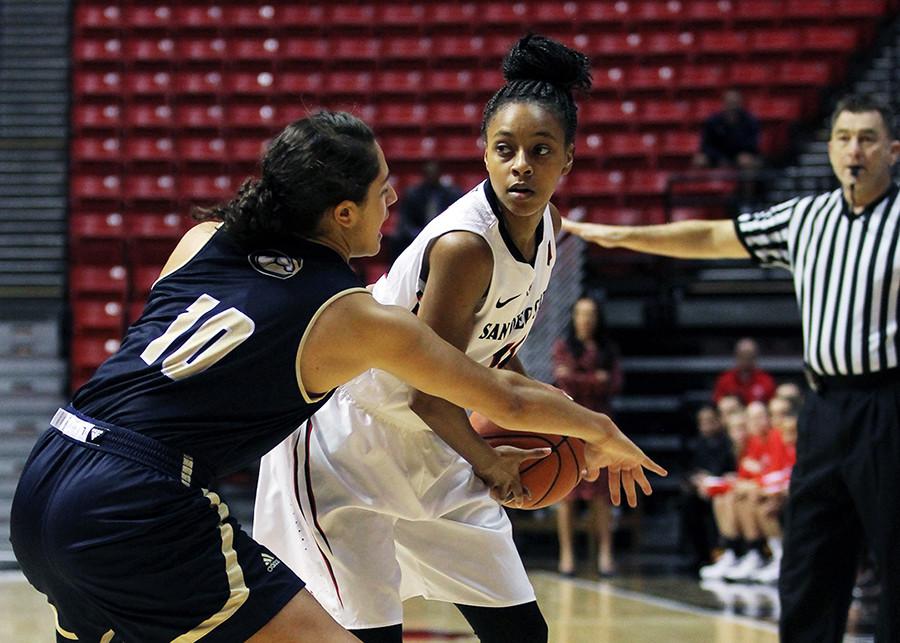 A 0-3 San Diego State women’s basketball team that has had trouble finding its offensive rhythm so far travels to the University of Washington to face a Huskies team Monday that is averaging 95 points per game and is 3-0.

The Huskies are led by junior guard Kelsey Plum, who is averaging 27.7 points a game, and the team’s average margin of victory is 32 points.

Plum is familiar with San Diego as she grew up in Poway, about 15 miles north of SDSU

“They have a very good San Diegan which will be a good matchup in Kelsey Plum,” said head coach Stacie Terry. “She’s a very good offensive scorer and she’s going to be a tough guard for us.”

Meanwhile, the leading scorer for the Aztecs after three games is sophomore guard McKynzie Fort with 14 points a game and SDSU has lost its first three games by an average of 16 points.

Fort said she is going to look for more opportunities to score and help the Aztecs offensively.

“I’m having a tough time finishing, but I have to get out of this slump,” Fort said. “I’ll be looking to score when the defense breaks down and I think that will help the team a lot as well”

SDSU is giving up 74.7 points defensively and junior point guard Ariell Bostick said defense is going to be the team’s focus going into the game.

“If we learn how to fix little mistakes we can be an unstoppable team on defense,” Bostick said.

The Aztecs are 0-1 under coach Terry against Washington, losing to them at home last year 69-48.

Terry is in her third season as head coach and owns a 6-21 record on the road in her three years with the team and the Huskies have a record of 24-8 at home over that stretch.

The Aztecs have struggled offensively thus far, averaging 58.7 points a game and shooting just 36 percent from the field as a team. That offensive frailty creates another problem.

“We’re not shooting the ball well right now so it’s putting a lot of pressure on our defense,” Terry said.

Part of the reason SDSU has struggled offensively is teams are primarily playing zone against it and the team is shooting just 25 percent from 3-point range. Terry said she anticipates facing a lot more zone defense than man-to-man this season.

“We’re going to have to put in some new sets looking to be a little more specific in what we’re trying to run,” Terry said. “I have guards who can get to the rim whenever they want to so we have to look for ways to open up some dribble drive lanes.”

SDSU primarily utilizes a press defense that aims to increase the tempo of games and force turnovers. However, the Aztecs have lost the turnover battle in the three games they have played, averaging 18.3 turnovers and forcing just 14.7 turnovers.

Terry said the team is still perfecting their press defense and she expects to see the turnover numbers improve as the season goes on.

Washington comes into the game averaging 17 turnovers a game, but has caused an average of 21.7 this season.

The Huskies also have four players who are averaging more than ten points a game while SDSU has just two.

“They have a lot of players who can score the ball whenever they want to,” Terry said.  “We’re going to watch a lot of film, do some fun stuff with our defense and see if we can take them out of what they are used to running.”

The game tips off Monday at 7 p.m. in Seattle.