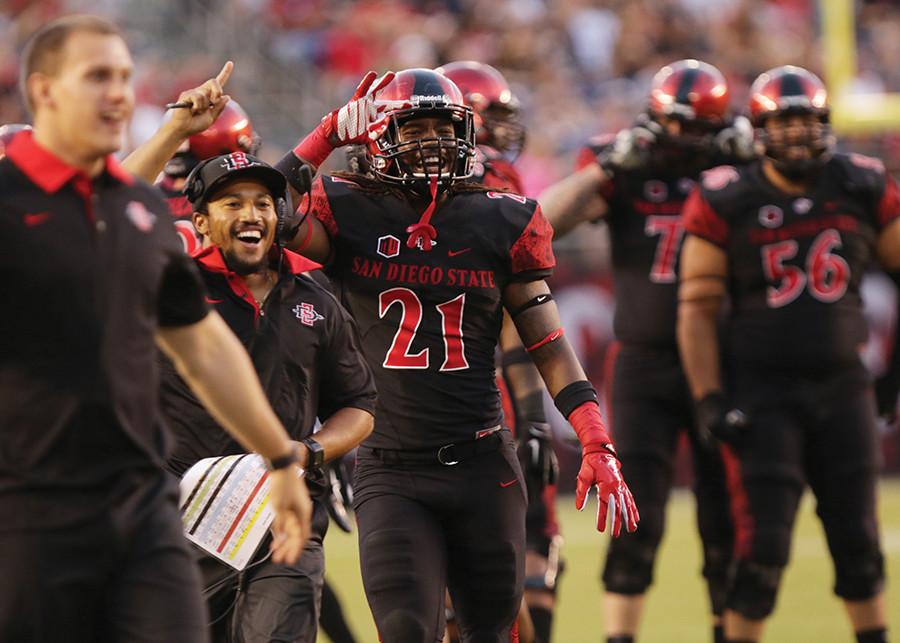 Junior cornerback Damontae Kazee strutted into the end zone, the culmination of his 63-yard punt return touchdown to put an end to any rebellion brewing against his San Diego State football team, giving it a commanding 42-7 lead over UNLV.

And with this, the party began.

Las Vegas, known primarily for it’s legendary strip and party mentality, played host to the Aztecs’ 52-14 trouncing of the Rebels, although the only running they did on this night was in pursuit of an Aztec football player.

It was fitting that the Aztecs were able to celebrate their Mountain West championship game berth, the first such appearance in program history, in Sin City.

Sinful, an adjective applicable to the Aztecs’ Saturday night performance.

Another word comes to mind after watching the contest: statement.

Head coach Rocky Long and company made a statement on Saturday night that a Mountain West Championship appearance, and even a bowl game berth, are not enough for this Aztec team.

They made a statement that the College Football Playoff selection committee should not, and cannot, ignore the dominant Aztecs and their rightful place among the nation’s Top 25.

All night, the appetite of the hungry SDSU team was never satisfied.

Even when they had a 28-0 lead with only 16 seconds remaining in the first half and the ball at the 13-yard line, the offense still ran two plays and sent in a field goal off the leg of senior kicker Donny Hageman.

It was that aggressive attitude that SDSU held all night that helped it put an exclamation point on its West Division winning season with an amazing performance, one that would have been worthy of a primetime showing at the Bellagio hotel.

It would be one thing if SDSU was only winning all of its conference games, which is a memorable feat itself, one that only six other Football Bowl Subdivision teams have accomplished thus far this season.

But the Aztecs are demolishing their opposition.

In the last four games alone, SDSU has outscored opponents 179-48.

The Aztecs’ red zone proficiency has been a big part of their high outpouring of points, scoring on 93.9 percent of red zone trips coming into their game on Saturday, which ranks sixth in the nation.

Regardless of the record or talent level of the opposition, this kind of domination has to be rewarded, especially considering how the Aztecs have avenged their early season woes.

And along the way, silenced the myriad of skeptics that arose after their seemingly debilitating home loss to the University of South Alabama.

But a team progresses as the season goes on, and this year the Aztecs have aged like fine wine.

And with this development, it has become substantially harder to tell what aspect of the team is most impressive.

Early on, it was the running game. Then, the defense got its teeth.

But at this all-important juncture, all the pistons are pumping and SDSU has shown little signs of slowing down.

It would have been easy for the Aztecs to turn off the engine for a night and stroll through a victory lap in Las Vegas against a weak 3-7 Runnin’ Rebels unit knowing it had already guaranteed its spot in the postseason.

And it would be very easy for the Aztecs to do so again next week when they take on the University of Nevada on senior night.

But that is not in the nature of this Rocky Long-led team.

They recognize that this kind of success has not come to San Diego football in a long while (sorry, Chargers fans), and while they have already made history, why should that be enough?