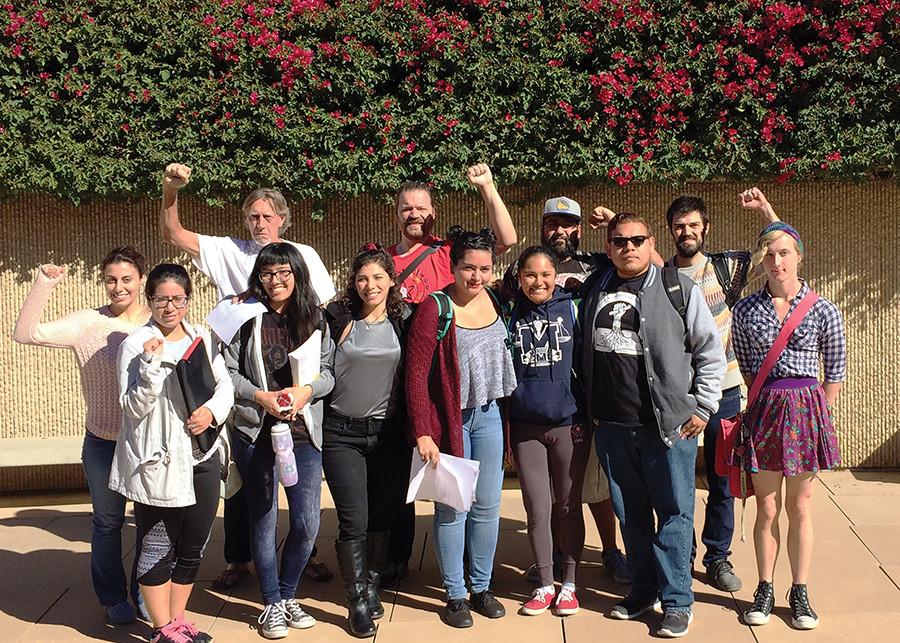 A group of around 15 San Diego State students were turned away after marching to the office of Donna Tusack, CEO of Aztec Shops, to request a meeting and discuss the Aztec Shops workers’ right to form a union.

The group, including members of activist group SDSU Forward and Aztec Workers United, were told by Edith Anaya, administrative support coordinator for Aztec Shops, that Tusack couldn’t meet with them because she was in and out of meetings.

Tusack sent a response back refusing the meeting request.

“We provide a very fair and competitive wage and benefits program and an open and welcoming working environment where employees are free to share their voice and raise any concerns they may have,” Tusack wrote in her response. “Based on this, we do not believe a meeting is necessary or warranted at this time.”

Denyse Martinez and Melanie Sandoval, both juniors double-majoring in psychology and Spanish,  work on campus for Aztec Shops and spearheaded the students’ effort.

Martinez and Sandoval tell a different story of the working environment, and they dropped off a typed statement claiming that managers have interrupted their talks about collective bargaining, discouraged employees from signing union cards or having conversations about unions, and posted signs next to the employees’ time clocks with misleading information about unions.

The students’ statement asked that these activities cease and the signs be removed.

Sandoval said she decided to march to Tusack’s office because she wanted to voice the concerns of her coworkers regarding working conditions.

“It was scary, but necessary,” she said. “I felt like if it wasn’t me then nothing would get done about (the issue).”

Sandoval, who works at the Aztec Market in East Commons, said she would come in to work some days and her manager would tell her they were full that day so she would be working at the Cuicacalli Dining Room or another Aztec Market on campus.

Sandoval would have to walk over to the new location she would be working and wouldn’t be paid for the time it took to walk there.

She said she would also like her work schedule to be more predictable and posted further in advance. Multiple times her schedule was posted Sunday night, and it informed her she had to come in Monday morning to work.

Martinez said she wants a more established schedule, especially during finals, so she doesn’t have to get called into work and stop studying.

Graduate geography student Will Lapinal said he was there as part of SDSU Forward to support Sandoval and Martinez’s efforts.

“Our job is to help them get a seat at the table,” he said. “The longer they delay, the more interest we will draw so it’s in their best interest to meet with them soon.”

Sandoval said they chose to go as a group to show that it wasn’t just one worker who was raising concerns.

“They have a wall up but we are pushing on the bricks,” Sandoval said.