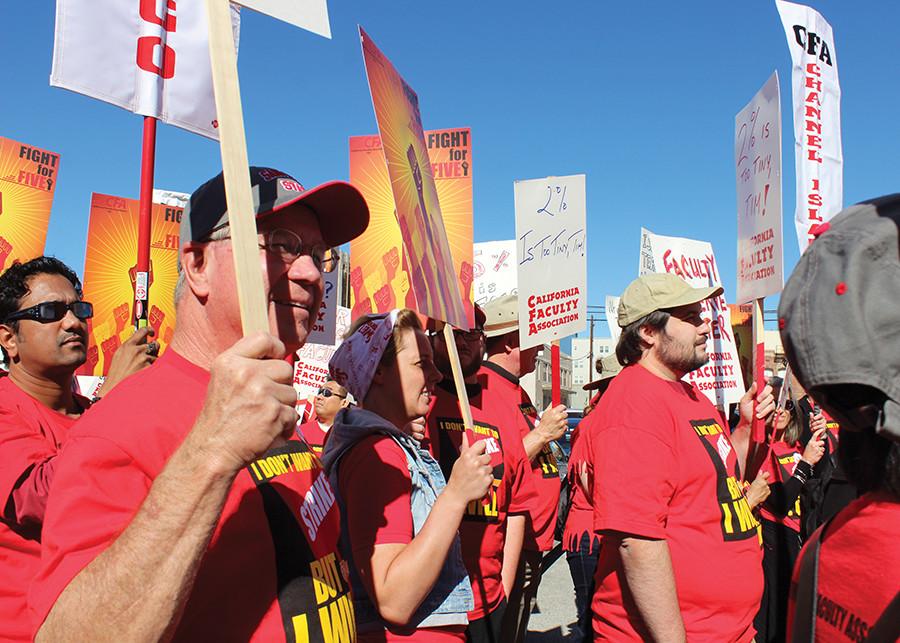 More than 1,000 faculty and students from the 23 California State University campuses marched near Chancellor Timothy White’s office in Long Beach on Tuesday, Nov. 17 to rally for a 5-percent wage increase.

Rally demonstrators blocked off streets in downtown Long Beach near the CSU headquarters and congregated at a meeting site in front of the building. They sported red T-shirts that said, “I don’t want to strike, but I will” and carried picketing signs that read “Fight for Five.”

“We’re fighting for 5 percent,” Donna Castaneda, SDSU psychology professor said.  “I think that people don’t realize, like students and the public, how few raises we get as faculty. I’ve had very few raises and it’s important to take seriously this opportunity to finally give us a decent living raise.”

In a salary snapshot from April 2015, the reported average salary for a full-time professor was more than $96,000, it was more than $86,000 for tenure-track faculty and more than $59,000 for full-time lecturers, according to the CSU.

The rally held outside of the Board of Trustees meeting was planned to stand against the current 2-percent wage increase proposal and to deter a possible strike in the spring, which was approved  by 94 percent of CSU faculty when put to a vote earlier this month.

“We’re standing up because we know that faculty working conditions are student learning conditions,” said Melina Abdullah, chair of the Pan-African studies department at Cal State Los Angeles and emcee of the rally.

“Our students and our faculty deserve fair wages and fair learning conditions. We deserve a public university system that really serves the public.”

Faculty and students chanted in support as protesters continued to rally outside the building throughout the afternoon while Long Beach police officers surrounded the chancellor’s office doors.

“Faculty working conditions are student learning conditions,” SDSU graduate student Ashley Wardle said. “So if they’re hungry and not able to be good teachers, then our learning as students suffers. There’s an intersection where we have to support each other.”

“I would tell Tim White that he needs to treat us fairly,” said Gene Lamke, hospitality and tourism management professor and CFA bus rider. “If we’re the heart of the university system, then pay us like we’re the heart.”

The CSU’s labor negotiation process is now moving into fact-finding, a process by which a neutral party hears both sides of the settlement and presents a non-binding report for each side to review.

“If no settlement is reached, then the CSU can impose its last and best final offer, which is a 2-percent general salary increase, and CFA can take job-related actions, up to and including a strike,” Toombs said.

According to the CSU, a 5-percent increase for all faculty would cost the CSU system about $107 million.

“The bottom line is that a strike is not in the best interest for our students, and that’s why we’re committed to the bargaining process and hoping that we can reach a negotiated settlement,” said Toni Molle, CSU director of public affairs.

If faculty do strike, Molle said the CSU has a plan to continue teaching students throughout.