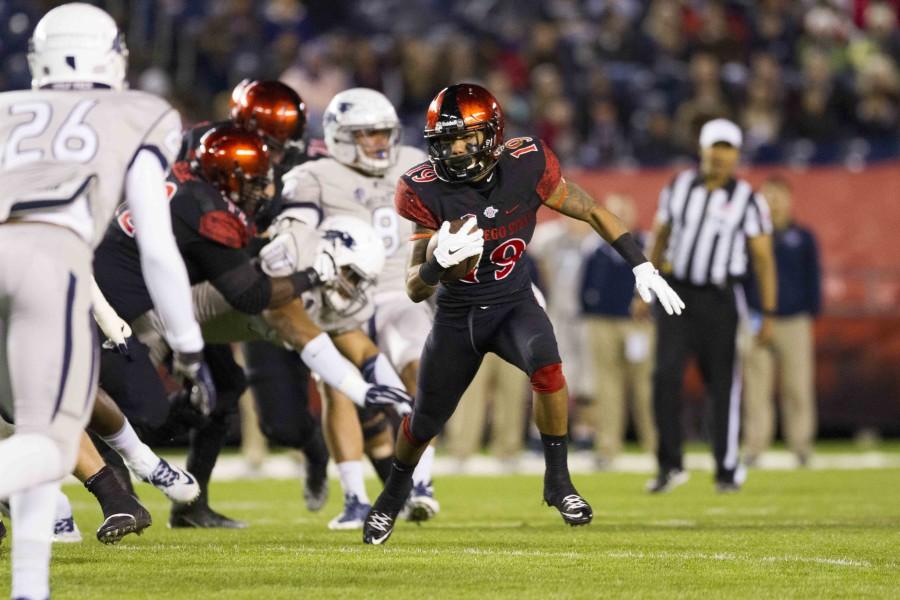 Running the table in the Mountain West came with a few bumps and bruises, but behind an incredible running game and a defensive stranglehold on the opposition in the second half, San Diego State ground out a 31-14 win over University of Nevada.

For the first time since 1974, SDSU finished with an undefeated conference record (8-0).

And despite an ankle injury, junior running back Donnel Pumphrey continued to prove why he will go down as one of the best running backs to suit up in the red and black.

After his 72-yard touchdown run in the second quarter, Pumphrey surpassed the 4,000-yard mark for his career, becoming only the second running back in MW and SDSU history to reach the milestone.

“Honestly, it’s a blessing,” Pumphrey said. “But I’m not really into that type of stuff. The 8-0 is better than the personal victory.”

Saturday was also Pumphrey’s eighth consecutive 100-yard rushing game (152 yards). The streak is the longest in MW history, currently tied for best in the NCAA and tied for second-longest in SDSU history.

Site of MW Championship still up in the air

With MW Championship implications on the line, Aztec fans had one eye on the field and the other on the University of New Mexico vs. Air Force Academy game.

An Aztec win coupled with a New Mexico win would give SDSU an opportunity to host the MW Championship game next week.

Both were achieved and Long thinks the solution is simple.

“I think we deserve to be the host team,” he said.

Pumphrey would eventually return, however Smith and Heyward would not.

Long is not optimistic about either player’s chances of playing in next week’s championship.

With Smith going down seven minutes into the game, the Aztecs turned to redshirt-freshman quarterback Christian Chapman.

The offense ran eight plays before Chapman finally dropped back to attempt a pass.

He did have an opportunity to show off his arm a little bit, and finished the night going 6-of-9  with 44 yards.

Without McGee, the Aztecs gave up multiple big passing plays, and Nevada had 203 passing yards.

With McGee in the second half, the big plays fizzled out.  The defense pitched a shutout, forced two turnovers and held the Wolf Pack to just 25 passing yards.

Junior defensive back Damontae Kazee picked off his seventh pass of the season midway through the fourth quarter.

The interception put Kazee at third all-time for the school’s single-season interception record, and made him one of four players in the Football Bowl Subdivision to record seven interceptions this season.

Junior safety Malik Smith’s interception in the second quarter was his fourth in his last five games.