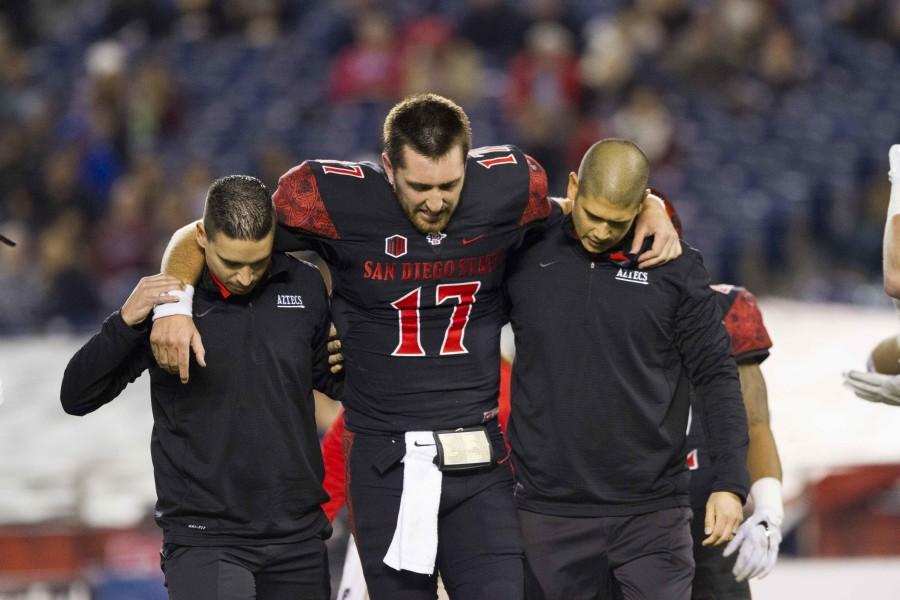 With an undefeated conference record on the line and the location of the Mountain West Championship game hanging in the balance, everyone at Qualcomm Stadium Saturday night was unsure how much of a celebration was warranted after a win over University of Nevada.

As far as anyone could tell, the two most important obstacles standing in SDSU’s way of hosting the championship game were cleared, but many more remain.

The Aztecs beat Nevada 31-14 in another performance marked with smashmouth defense and a solid running game. They finished MW play undefeated at 8-0 (9-3 overall). They won their last eight games by 14-plus points.

After all that they still might not host the championship game even after the other crucial part to make that happen played out 641 miles northeast of San Diego in Albuquerque, New Mexico.

University of New Mexico beat Air Force Academy 47-35 and handed the Falcons their second MW loss (6-2). Prior to Saturday, Air Force led SDSU in the composite rankings that the MW uses to determine a host site for the championship game.

It’s unknown what the rankings are or what they will be, but regardless of where the game is, SDSU will have a different starting quarterback.

Graduate-transfer quarterback Maxwell Smith left the game with a knee injury in the first half.

Smith’s career has been riddled with injuries ever since he was at University of Kentucky. In 2012, his sophomore season was ended by an ankle injury. He had shoulder surgery after the 2013 season, then transferred to SDSU.

After a shaky start to the year, Smith has justified the starting nod given to him in the fall. After 12 games, Smith has 1,529 yards, 13 touchdowns and just two interceptions. He hadn’t thrown an interception in nine straight games going into Saturday (he finished 3-for-3 with no picks against the Wolf Pack, bumping the mark up to 10 straight).

Also injured for the Aztecs was senior defensive tackle Christian Heyward, who left with what looked like a serious left knee injury. He was carted off into the locker room and returned to the sideline in the second half wearing street clothes and crutches with his knee stabilized. He has 5.5 tackles-for-loss and two sacks this year.

“There is no official word on either (Smith) or Christian Heyward,” Long said. “The inference I got is it’s not good. I would be very, very surprised if either one of them played the rest of the year.”

Junior running back Donnel Pumphrey ran in from a yard out on the game’s first drive for his first of two touchdowns on the night.

One thing SDSU has been lucky with this season is avoiding serious injuries to starters. That is until Smith was hurt in the second quarter.

On the play before Smith got hurt, Pumphrey tweaked his left ankle, leaving the field slowly while shaking his head. It was the same ankle he hurt against Fresno State that nearly kept him out of the game against University of Hawaii.

After Smith was looked at for some time on the bench, he limped to the locker room under his own power. He returned to the sideline in the second half wearing street clothes.

The next signal caller up is redshirt-freshman quarterback Christian Chapman, who lost the starting job to Smith in fall camp. Chapman went 6-of-9 for 44 yards and also rushed four times for 29 yards.

SDSU didn’t throw once on the drive that Smith and Pumphrey were injured on.

Instead, the Aztecs rode a steady, reliable 1-2 punch of senior running back Chase Price and sophomore back Rashaad Penny, culminating in Penny’s 14-yard touchdown scamper to put SDSU up 14-7 in the second quarter.

Some of those seniors had good games yet again. Price finished with 112 yards and a touchdown on the ground. Fely recovered a fumble in the second half that set up the Price touchdown.

SDSU’s defense, usually stout in the passing game, was picked apart in the first half on the right side of the field. Sophomore safeties Kameron Kelly and Trey Lomax were filling in for junior safety Na’im McGee.

McGee was serving a first-half suspension after being ejected for targeting in last week’s game against UNLV. Nevada threw for 203 yards in the first half. In the second half?

“When Na’im came back it was back to smooth rotation, it helped a little bit,” Malik Smith said.

The hallmark of the SDSU defense was once again on the ground. Nevada only mustered 35 rushing yards, despite its two running backs coming in with more than 2,000 combined rushing yards.

With no real passing success or threat for SDSU with Smith’s exit, the Aztecs had to run the ball even more than usual, which they did exceptionally well yet again. Pumphrey finished with 154 yards to go with Price’s 112-yard night.

Nevada started to key in on the run as the second quarter progressed, and the Wolf Pack thought they might’ve had SDSU in a hole when the Aztecs faced a third-and-long situation at their own 28-yard line after two straight penalties.

Pumphrey, as he’s done his entire career, responded by weaving through the defense in fifth gear for a 72-yard touchdown, his second of the night.