Monday Morning Quarterback: Senior class has a chance for greatness 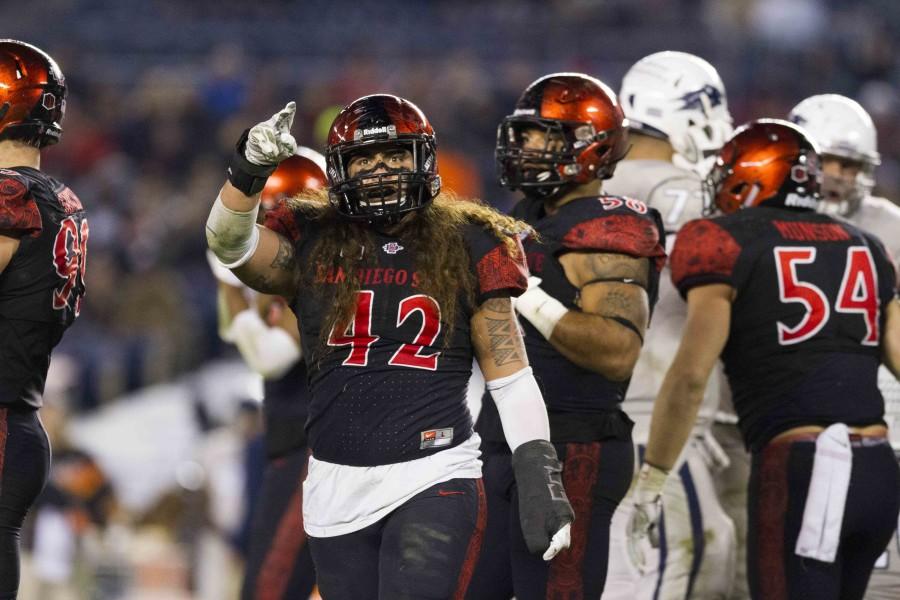 The night was littered with emotions, from the pregame entrance to the celebratory postgame mosh pit right in front of the disappointingly empty student section.

The 15 seniors on this San Diego State football team had a chance to finish their final season on the Mesa with a perfect Mountain West record, an accomplishment which has never been done in program history, and did so by defeating University of Nevada 31-14.

It was a surprisingly tame outcome for such a historic and memorable night, especially considering the Aztecs’ last four games, in which they have averaged 44.75 points.

This was new territory for a unit that has collected 33 wins over its last four years, including one seven and one eight-game win streak.

This four-year run was book-ended by two nine-win seasons, but unlike the last such season, this year will not end in disappointment.

And unlike any other year in the history of the program, this team has the chance to truly finish on top.

This senior class is the first to have a winning record in each of its four seasons since the 1990-93 class, when this one guy named Marshall Faulk was running rampant on the Mesa.

For the first time in a long time, SDSU football has found sustained success, and because of that we should be beyond grateful for this senior class, possibly the greatest in the history of the Aztecs.

The numbers for this unit speak for themselves.

Four straight bowl appearances and the first ever conference championship game appearance for the Aztecs.

The first four-year span with three or more eight-win seasons since 1976-79, during which famed head coach Claude Gilbert led SDSU to two 10-1 campaigns.

It was also under Gilbert that the Aztecs last ran the table in their conference season (1974).

And much like how football was played and won in that era, these Aztecs have made their mark by dominating in the trenches at the line of scrimmage.

Much like they have done all year, and throughout all four years of success, the Aztecs won with tenacity and aggressiveness.

The win, however, came at a cost, which was the loss of senior quarterback Maxwell Smith, who was replaced by redshirt-freshman Christian Chapman.

“I think Christian is gonna be a really good quarterback,” head coach Rocky Long said, of Chapman postgame. “I hope he is by next Saturday.”

His comment was met with laughter from the media.

It’s much easier to have that kind of sense of humor after leading the first ever undefeated MW season in program history.

And with the senior class that Long has, he can be confident that his team will handle the challenge against Air Force Academy the same way it has every MW opponent this year, no matter the quarterback.

Three players in this class — long snapper Jeff Overbaugh, defensive back Pierre Romain and defensive lineman Jon Sanchez — have each appeared in every single game since the start of their freshman year, which amounts to 51 games.

From top to bottom, from senior linebacker Jake Fely to Overbaugh, and everywhere in between, this senior class has been a staple of longevity and success.

Here’s wishing that the effort had been greater appreciated.

On Saturday night, not even 23,000 fans were in attendance to witness the culmination of an accomplishment that no Aztec football team has been able to achieve.

While all eyes have been on Steve Fisher court in Viejas Arena, Fely, senior defensive back J.J. Whittaker, senior offensive lineman Darrell Greene and company have brought relevance back to a program that has been caught in a competitive ditch for more than three decades.

This senior unit has the unique opportunity to leave SDSU on top with a 10-game win streak, 20th conference championship in program history and bowl game victory all very much on the table.

They have not only given Aztec football a reason to celebrate now, but a reason to be optimistic for the future of football on the Mesa.

This, then, would be a fitting ending for a group that has given so much to the Aztec football community, with little recognition or support.