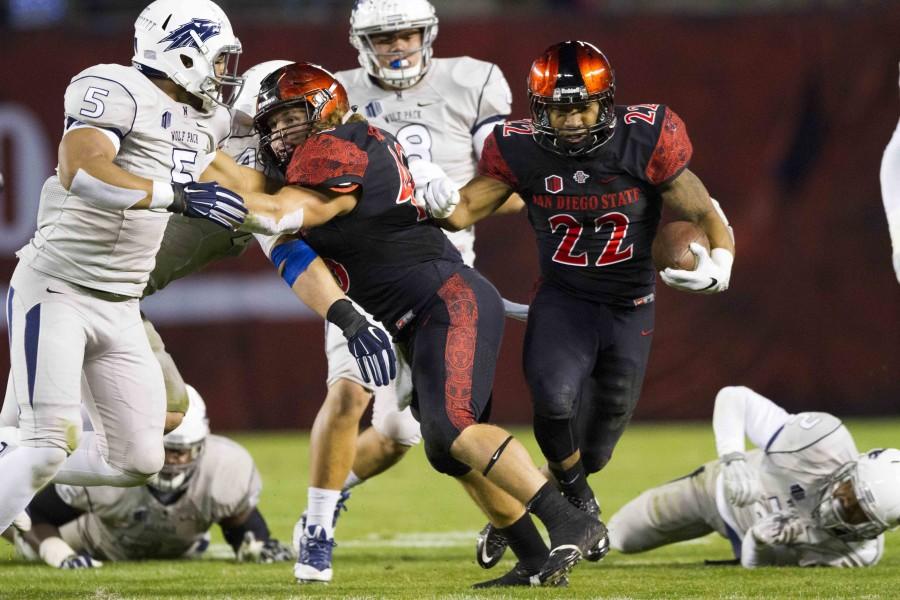 There was only one question heading into the final week of Mountain West football action: Will San Diego State or Air Force Academy host the championship game?

With an Aztec win and a Falcon loss in their respective regular-season finales, SDSU will host the championship game this Saturday at 4:30 p.m. on ESPN2

With the logistics of the game settled, the attention now can be turned to the matchup of the division champions.

In their four victories under head coach Rocky Long, the Aztecs have dispatched the Falcons by a two-touchdown margin on average.

Aside from the recent one-sided success in this matchup, the Falcons will also have to overcome their road woes, with all four of their losses this season on the road.

The largest indicator of those losses has been the Falcons’ inability to run the ball within their triple-option offense. In their eight victories they’ve averaged 363 yards on the ground, but that number nosedives to 243.5 yards in their four losses.

It will then be a large task for dual-threat senior quarterback Karson Roberts and leading rusher junior Jacobi Owens to crack the nation’s No. 4 rushing defense.

The Aztecs have held opponents to 95 rushing yards per game on the ground this season and only 73 yards during their eight-game winning streak.

Regardless, the Falcons’ ground game poses a large threat as head coach Troy Calhoun has an array of offensive weapons at his disposal. Heading into Saturday the Falcons have seven players with at least 300 rushing yards this season.

The heavy reliance, and success, on the run game is not to say the Falcons are afraid to air the ball out. Facing eight- and nine-man fronts, Air Force takes advantage of the play-action and trusts receivers to beat man-to-man coverage for big plays.

Roberts has averaged 21.7 yards per completion, throwing for 1,411 yards and nine touchdowns, but also 10 interceptions.

Junior wide receiver Jalen Robinette has proven to be Roberts’ home run receiver as he is second on the team in receptions and averages 27.2 yards per catch.

Long will also have to game plan for Falcon sophomore running back Timothy McVey, who has only recently begun to contribute to this Falcon offense.

But Air Force did not earn a spot in the MW Championship game based solely on offense. The Falcon defense has played just as large a role in this team’s success.

The No. 19 defense in the country is led by senior defensive tackle Alex Hansen and junior defensive back Weston Steelhammer — whose name deserves an award.

With a team-high 14.5 tackles-for-loss and 7.5 sacks, Hansen anchors the Falcon front seven that has limited opponents to 139.5 rushing yards per game.

Steelhammer has been the Falcons’ Swiss Army knife on defense, as he leads the team with 72 tackles and five interceptions, and has 10 tackles-for-loss, including one sack.

The season-ending knee injury to SDSU’s graduate-transfer quarterback Maxwell Smith, and backup redshirt-freshman Christian Chapman’s inexperience, will tempt the Falcons to stack the box early and test the young quarterback.

“I would say that Air Force is going to stack the line of scrimmage and say, ‘Christian, can you throw it or can you not throw it?’” Long said after Saturday’s win. “‘Let’s find out if you can throw it because we’re not going to let you run it.’”

However, countless teams tried to stack the line and no one has had success to stop the junior Donnel Pumphrey and senior Chase Price-led rushing attack.

Tickets for the MW Championship game

Student tickets are free for the game, and can be picked up at the Viejas Arena box office.