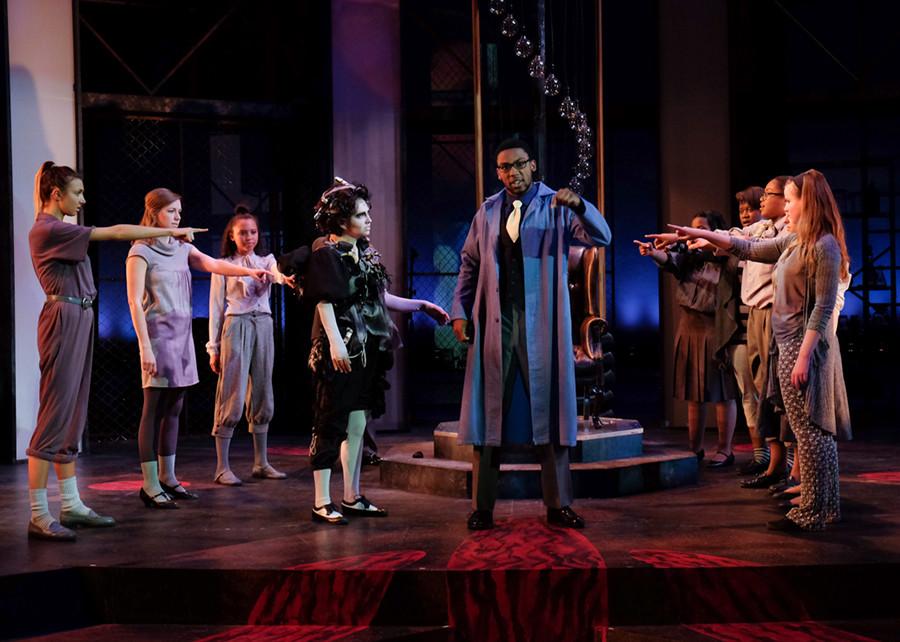 The School of Theatre, Television and Film’s adaptation of “Doctor Faustus Lights the Lights” by Gertrude Stein is highly unorthodox, but in the best way. Director Peter Cirino pushes the boundaries of traditional live theatre to create an abstract experience like no other.

“Doctor Faustus Lights the Lights” tells the story of Doctor Faustus, a man who sold his soul to the devil, Mephisto, for an electric light. Throughout the show, Faustus, played by Carter Piggee, denies the possibility of his going to heaven or hell as he has already sold his soul.

“Our adaptation of Stein’s play explores the great advancements and potential absolute corruption modern technology has brought us,” dramaturgs Maya Greenfield-Thong and Shelley Orr said as an introduction before the show.

The show features undergraduate and graduate students from a variety of different disciplines including music, theatre, art and dance. It’s a prime example of student collaboration to achieve one goal.

Each cast member showcased his or her strengths through dance, art or song to create something larger than life.

Each actor embraced his or her character, some of whom were quite frightening. Namely, Mephisto, played by theatre arts sophomore Alexis Park, was phenomenally intimidating and stole the show on several occasions.

Marguerite Ida and Helena Annabel (MIHA), played by performance theatre sophomore Steele Severson, is the best example of a multi-dimensional character. It’s unclear whether she’s a single woman with multiple personalities or two separate characters. It’s up to the audience to determine if MIHA is actually one person or two people.

The show is dark, but has some comedic elements and characters. A prime example is the Man over the Sea, played by performance theatre junior Henry Maddicott. Although Boy and Girl, played by Jotae Fraser and Kennedy Garcia, respectively, are sure to make audiences laugh out loud.

The huge production connects the cast and audience. So much is happening in every scene, mainly because of the genius set design. The two-level set, created by Nick Pecher, is multi-dimensional, allowing characters to interact with the audience from every angle. The brilliant use of the bright electric light as the focal point shows every event surrounding a single idea.

Students may initially think to turn off their cell phones during the show, but don’t bother. The highly interactive show encourages students to post comments, pictures and videos on social media with the hashtags #sdsufaustus or #sdsuartsalive.

Show tip: If students don’t have any business to take care of during intermission, stick around to watch cast members engage in an all-around dance party.

Students can find more information about the show including interviews with the cast and crew here.