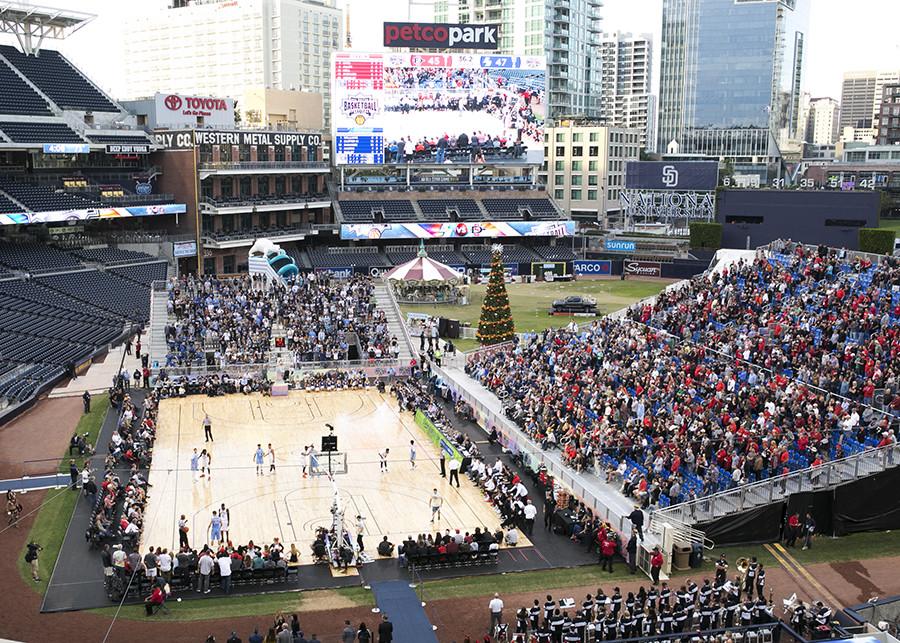 The last time the San Diego State men’s basketball team played a game outdoors, it was a forgettable outing.

SDSU was defeated by Syracuse University 62-49 in 2012 as the Aztecs went 1-for-18 from beyond the arc and shot 27 percent from the field aboard the gusty USS Midway.

As for Sunday’s game against University of San Diego at Petco Park, head coach Steve Fisher doesn’t think it will be anything like the game against Syracuse.

“I don’t think the wind is going to have the effect on the game like it did on the Midway,” he said. “I’m excited to be playing here, it’s a one of a kind event and we’re privileged to be a part of it.

Other than Fisher and other coaches, not much remains from that loss to Syracuse.

Senior forward Winston Shepard logged 21 minutes and went 1-for-6 from the field for a total of four points. He was suspended at the time, but was able to play in the game because of the unique student-athlete experience.

Senior center Skylar Spencer was the only other player on the current team that played in the game and played just three minutes with no points, rebounds or blocks.

Still, though, Shepard doesn’t believe this game will be anything like the game against Syracuse.

“I think (against Syracuse) with the elements and style of play versus the team we played it was almost one of the worst recipes you could draw up,” he said.

USD’s RPI of 334 is the worst in the West Coast Conference and ranks as one of the worst for Division I teams SDSU has played, and will play, this season.

However, the Aztecs showed even they are susceptible to losing games against far inferior opponents when they lost to Little Rock back on Nov. 21.

Shepard and company know the Toreros play with a little more fire in the City Championship, and they aren’t letting the RPI fool them.

“Traditionally, we’ve had a lot more success than them, so they always play us a little harder,” Shepard said. “They’re Division I, so it’s not like they’re a pushover, you know.”

The Toreros gave the Aztecs quite a scare in 2013 when they lost by just one point off a last-second potential game-winning shot that rimmed out from USD now-senior guard Duda Sanadze.

“I’ve talked repeatedly about what happened (that game) and I’ll probably show them that clip tomorrow right before the game,” Fisher said.

Sanadze reflects on the missed shot

Speaking about that shot that nearly gave USD the city title in 2013, just like Fisher hasn’t forgotten about it, neither has the man who shot the ball.

“It’s always on my mind every time I see (SDSU) because I think everything could be different if I would’ve made that shot,” Sanadze said.

He believes a win against SDSU that season would have helped build confidence for himself and for the program in general.

While Sanadze was a sophomore when he took that shot, he’s now one of two seniors on the team and averages the most minutes per game and leads the team in points per game.