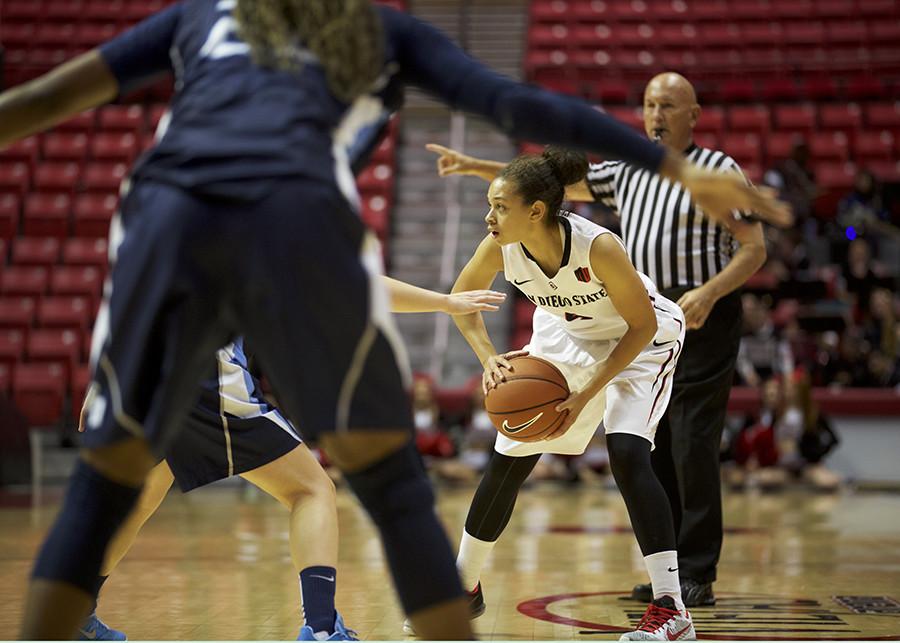 The San Diego State women’s basketball team is evolving quickly under third-year head coach Stacie Terry and took its biggest stride of the season against Cal State Northridge this past Monday.

Sophomore guard Lexy Thorderson capped off the comeback effort on a 3-pointer with 9.4 seconds remaining in the game and the Aztecs held on for their third win of the season.

Following their comeback 67-65 win against CSUN the Aztecs will look to continue their momentum on the road against a struggling Loyola Marymount University team Thursday at noon.

LMU is 3-6 overall and is coming off of an 80-48 loss to University of Missouri on Monday.

Terry said she hasn’t changed the offense too much from game to game, but is looking to play more small ball against LMU because it employs a half-court trap.

“I love the fact we have so many versatile players and we’re able to hurt teams in many different ways,” Terry said.

Sophomore guard McKynzie Fort led the team in scoring with 18 points in the game against CSUN and is the leading scorer for the season at 15.8 points per game, which ranks fourth in the Mountain West.

The Aztecs have spread the scoring out efficiently so far this season with six players averaging between 5-7 points per game, but have lacked the presence of a consistent second scoring option.

SDSU is averaging just 59.2 points per game this season, which puts them ninth out of 11 teams in the MW.

“I think (a second scoring option) is coming,” Terry said. “They’re getting confidence in their shots and the fact we have so many people scoring means the ability is there.”

The Aztecs haven’t allowed opponents to score more than 65 points a game in their last four games and they are 3-1 during that stretch.

SDSU has only out-rebounded an opponent once this season and LMU is averaging 2.1 more rebounds a game than opponents. However, Terry said she has seen the team take strides in rebounding and its defensive success has come from boxing out and limiting second-chance opportunities.

“We have to (rebound) by committee and we have challenged all of our guards to improve their rebounding,” she said.

“(Bostick) is our energy giver,” Terry said. “She does a lot of things for us and is able to change the game with her effort and energy.”

The game on the road against LMU tips off at noon and a live stream can be found on the West Coast Conference website.