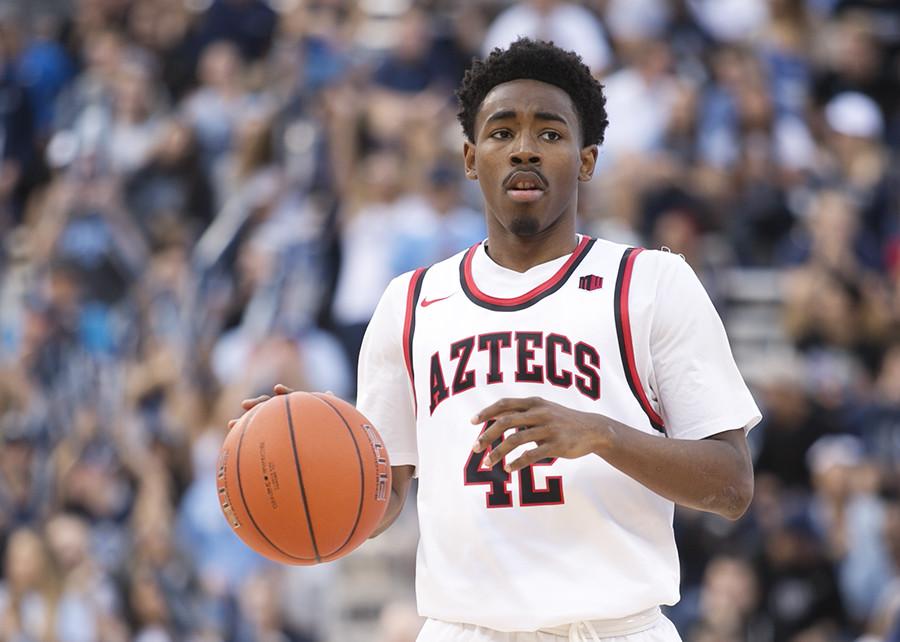 Taking one step forward and two steps back.

That was sentiment from the San Diego State men’s basketball team following its 52-45 loss to Grand Canyon University Friday night at Viejas Arena.

That’s the way the Aztecs’ season has gone thus far, for every high comes a crushing low.

For every big win, or whenever it looks like the team may turn the corner and play like the team fans on the Mesa have become accustomed to, the Aztecs stomach a loss like the one on Friday.

“Something’s got to change, this is disgraceful,” redshirt-freshman forward Zylan Cheatham said, with tears filling up his eyes.

The Aztecs closed the game out on a 2:59 scoring drought and made just two of their last 16 field goal attempts, which pretty much summed up their frustrations throughout the game.

They managed just 22 points by halftime and shot a meager 31.5 percent from the field by game’s end.

“Forty-five points obviously is not going to win,” head coach Steve Fisher said. “We are a team that is not playing well, obviously, that’s an understatement.”

Grand Canyon entered the game 8-2, but had yet to win a game on the road and were three games removed from a 111-63 loss to University of Louisville.

“This is our best victory so far,” said Grand Canyon head coach Dan Majerle, referring to his team’s three-year history playing in Division I.

The Antelopes closed the game out on a 12-4 run as the Aztecs were not able to put together back-to-back makes for the last 18 minutes of the second half.

With No. 2 University of Kansas looming next up on the schedule, the Aztecs seem to be in troubled waters.

“If we go into (the Kansas game) like we did tonight we’re going to lose by 50,” Hemsley said. “Unless we want to win a game, unless we want to make the (NCAA) tournament we have to change something.”

A few things the Aztecs looked to work over their eight-day break between games were limiting turnovers, trying to guard the 3-point line better and improving on the offensive glass.

SDSU was able to accomplish one of those as the Antelopes attempted just five 3-pointers and converted on two of them.

As for the other two, it looks like the Aztecs still have some work to do.

They were out-rebounded on the offensive end 15-13, including 10-2 in the first half,  and came out of the gates with two turnovers on their first two plays of the game, ending with 12.

“Each of us has to say, ‘What can I do? What will I do to change it?’ There’s no alternative, that’s what we have to do,” Fisher said.

The game was knotted up 22-22 at halftime as the Aztecs managed to go just 3-for-10 from the free-throw line and were 1-for-7 from beyond the arc at the time.

Toward the end of the first half the Aztec remained scoreless for a 5:53 span that included 10 missed shots sprinkled in between makes.

Life didn’t get much easier in the second half as the Aztecs shot 25.8 percent from the field and were 2-for-12 on 3-balls.

They would end the game 3-for-19 from long range, another common theme in the team’s mediocre start to the season.

“Going 3-for-19 tonight is not going to change the open shot that I take next game, or the open shot (sophomore guard Trey Kell) takes, we’re still going to shoot the open 3,” Hemsley said.

Hemsley led the Aztecs with 13 points. It was the 10th time he’s reached double figures this season and the ninth time he’s led the team in points.

Cheatham grabbed a team-high 11 rebounds, which is also a career-high for him.

The Aztecs stay at home for their last nonconference game of the season Tuesday against Kansas.