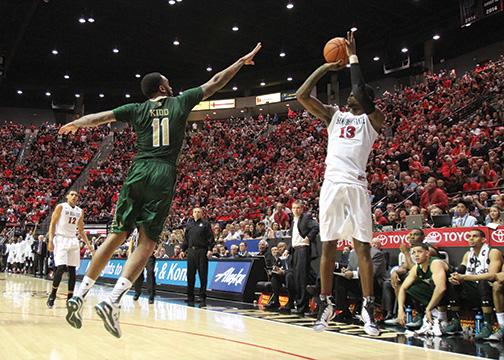 In order to have a shot at making a seventh-straight NCAA Tournament, the San Diego State Aztecs will need to climb a mountain.

With early season losses against opponents like University of San Diego, Grand Canyon University and Little Rock, earning a bid to the big dance will seemingly require a Mountain West conference championship for SDSU.

For senior forward Winston Shepard, the rough first half of the season has now become obsolete, with the focus now being on what lies ahead in conference play.

“We’re not thinking about anything that happened before tonight,” Shepard said. “It’s a long season and we’re on the second book of our season right now. We burned the first book, we learned from it and now we’re on to bigger and better things.”

It was the ninth season in a row that SDSU won its conference opener.

“It always feels better after a win,” SDSU head coach Steve Fisher said. “It feels even more exciting when you win with a good flavor about how you play.”

The Aztecs began its climb charging the mountain at full speed and with a ton of energy, opening up the game with a 10-2 run.

“Out of the gate you always look better when you make shots, and we made shots early,” Fisher said.

During the run, Shepard drove to the net and threw down a dunk, which ignited the crowd at Viejas Arena.

Shepard would light the crowd up a few possessions later, when he lobbed an alley-oop to redshirt freshman Zylan Cheatham, who finished with an authoritative dunk.

The senior’s energy drove the Aztecs, and he picked up his second double-double of the 2015-16 campaign, finishing with 16 points, 11 rebounds and one assist.

“Winston has been practicing like a trooper,” Fisher said. “We talked to Winston, we said two things: play for others and good things will happen for you, and rebound the ball.”

“What’s so funny about it, is the whole season I’ve been trying to let the game come to me,” Shepard said. “I’ve been trying to be aggressive, play to my strengths, find my teammates, be a playmaker and do what I know I’m good at.”

Rebounding was a major emphasis for the team in practice this week. The Aztecs finished the night nearly doubling their opponents rebounding totals, finishing with 50 boards to Wyoming’s 26.

On the offensive side, the Aztecs out-rebounded the Cowboys by an even greater margin: 21-6.

“We want to rebound half of our misses, and we want to keep them to five or under.” Fisher said. “And we did a yeomen’s job, especially early, on the offensive glass. That was huge to our start.”

Senior forward Skylar Spencer finished the game with a season-high 12 rebounds. It was the fifth time in his career he recorded double-digit rebounds in a game.

“Coach talked to me and he named a couple things that he wanted me to improve on and one of them was rebounding,” Spencer said. “So I have to turn it up a little bit more and give a little bit more effort, and when you try hard, balls come your way.”

After allowing the University of Kansas to shoot 42% from behind the arc eight days ago, the Aztecs limited the Cowboys to just 26% from downtown.

The Cowboy’s first 3-pointer came with just over three minutes left in the first half.

With a 35-25 lead at halftime, the Aztecs looked to keep some consistency in the second half.

But consistency has been an issue this season for SDSU, even though it holds a 6-0 record this season with a halftime lead.

The struggle for consistency showed early in the second frame.

In the first ten minutes of the second half the Aztecs hit a major scoring drought, and were only able to salvage nine points.

The Cowboys took advantage of SDSU’s drought, and pulled within four, narrowing the score to 44-40.

Hemsley’s 3-pointers put some air back into the lungs of the 12,414 fans in Viejas arena, who became restless after Wyoming’s surge for a last-ditch comeback.

The victory is a fresh start, after a rough first half of the season, and Shepard feels this is just the beginning for SDSU.

“We have a lot of talented guys on our team,” Shepard said. “We have a guys who know how to play at the next level. At some point, you know those talents are going to take over.”