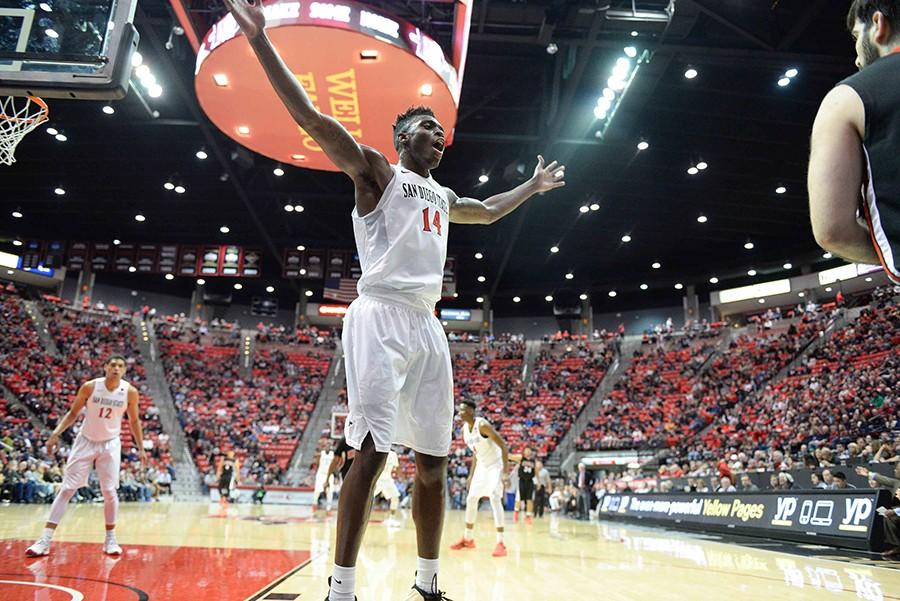 As San Diego State was sweeping its doorstep, kicking its students out and turning out the lights on the fall semester, the men’s basketball team was losing its fifth game, a 52-45 loss to Grand Canyon University. It was the team’s second shocking loss in 10 days.

Then the Aztecs lost their final nonconference game to Kansas University, 70-57, which dropped the Aztecs’ record to 7-6.

SDSU’s worst nonconference performance since the 2004-05 season left the team pigeonholed in a position of needing an undefeated — and improbable given past performances — run through Mountain West play.

While the campus was dark, the Aztecs toiled under the lights of the Jeff Jacobs JAM Center and Viejas Arena.

That work propelled the Aztecs to a 5-0 conference start, which was good enough for sole possession of first place in the MW.

The big difference between nonconference and conference play: the ability to finish games.

To gain better understanding of what it means to finish a game, consider the losses that SDSU suffered during its nonconference schedule.

One loss was a complete blowout to West Virginia University and another loss was to then-No. 2 Kansas, but at one point in the second half the Aztecs were within four points of the Jayhawks.

Besides these two losses, SDSU never lost to a nonconference opponent by more than seven points.

In its first loss of the season to then-No. 16 ranked University of Utah, which is out of the Associated Press Top 25 poll but still receiving votes, SDSU kept it close and twice pulled within two points of the Utes with less than a minute to go, yet it still lost.

Five days later, SDSU suffered what most would call a mind-numbing loss to the University of Arkansas-Little Rock, who this week also received an AP Top 25 vote after racing off to a 15-2 start. The Aztecs led by one point with less than three minutes to play, but were outscored 9-2 the rest of the game. They didn’t finish.

After a day of poor shooting and what head coach Steve Fisher described as a lack of effort, SDSU  played University of San Diego tight to close the game. The Aztecs trailed by two with little over a minute left, but they didn’t finish the game.

And once again they didn’t finish the game they lost to Grand Canyon. After holding a two-point lead with 2:59 left, the Aztecs would be outscored 9-0 to close the game.

Normally, finishing games is reserved for coach speak during a press conference or practice, but SDSU has made the term relevant by routinely finishing close games with a victory.

Last year, the Aztecs were tied with Long Beach State, UNLV (twice) and University of Nevada all with less than five minutes to go, and in a business-as-usual state the Aztecs secured wins.

In the 2013-14 season, SDSU beat University of Washington and Kansas after holding on to small leads with less than a minute to go.

The Aztecs now stand at 5-0 in conference because they have been able to finish games like they have in past seasons.

Sure, the home games against the University of Wyoming and San Jose State University didn’t make fans bite their nails off as the Aztecs held double-digit leads in both games with less than a minute, but its the other three wins that display the grit of this team.

Under a minute left and leading by one at Utah State University, Aztecs win.

At Colorado State University and tied with a minute left in the game, Aztecs win.

In a battle between the two undefeated teams in the MW at Boise State University, Aztecs win.

SDSU is back to the old form that those following the program have grown to appreciate.

Even when a lid has been on the basket during its conference games, SDSU has been able to grind out wins.

In at least one half against Utah State, Colorado State and Boise State, the Aztecs shot less than 38 percent from the field and still managed to win games.

In each of the six losses, the Aztecs shot less than 38 percent in one half, but couldn’t close it out.

But, why are the Aztecs finishing games now that they are in conference play?

Maybe it’s the maturation of two starting freshman, or the persistence and leadership of two seniors that have returned to the starting lineup, or maybe it’s sophomore forward Malik Pope reestablishing himself as an offensive threat.

Whatever the causes of the strong conference start are, the result is finishing games in a way the team wasn’t able to in nonconference play.