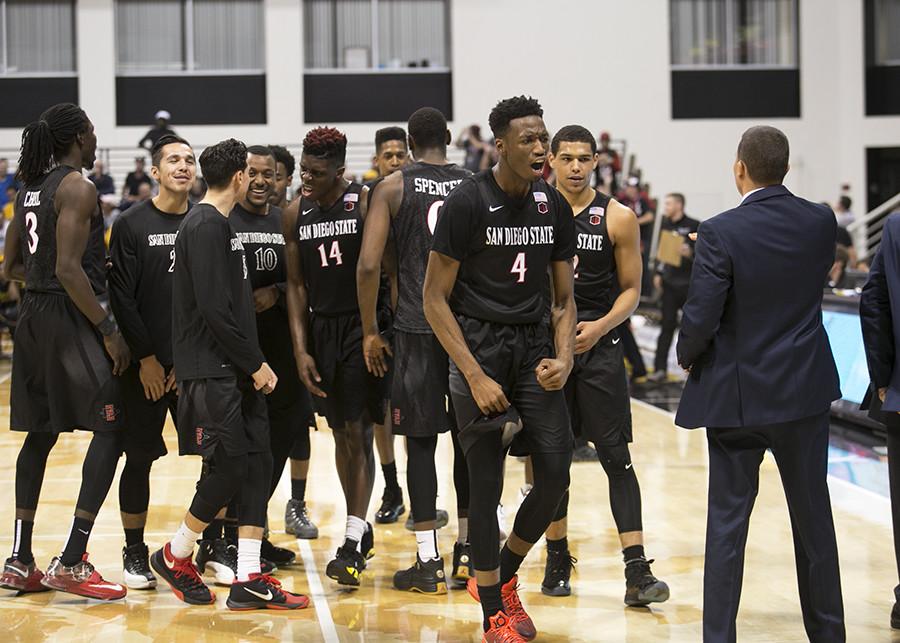 If only that number was 36 minutes and 12 seconds, then the Aztecs would have walked away with their sixth straight conference win in regulation. However, Fresno State senior guard Cezar Guerrero’s 3-pointer at the buzzer forced overtime.

That wasn’t enough to stop the Aztecs, though, as sophomore guard Trey Kell scored a career-high 27 points to help lead the Aztecs to a 73-67 victory.

“It’s definitely exciting to do that on a college level in major Division I college basketball,” Kell said. “It’s always fun to do that and it’s a humbling experience. I’m just glad we got the victory.”

Kell’s looping 3-pointer with the shot-clock expiring and 2:24 left in overtime was the cherry on top of the finest game of his Aztec career.

His and-one layup with 1:31 left in the game was also crucial in even getting the game into overtime.

“Right now, he knows he’s a great player,” head coach Steve Fisher said. “A year ago we told him he was a great player and I don’t know if he was as convinced as we were … he’s growing up, and that’s what you’re supposed to do.”

For the second time in three years, the Aztecs have started out Mountain West play 6-0. The team’s record remains unblemished, but their play hasn’t been perfect in conference.

“In our league, there’s not a whole lot of a difference between where we sit now, 6-0, and where Fresno sits at 2-4,” head coach Steve Fisher said.

What has been perfect  is their ability to finish out close games, the kind of games they were routinely losing in nonconference play.

“We have confidence in each other now,” Kell said. “We’ve been through the battles, we’ve had close games throughout conference but we’ve come out on top.”

The second half was nothing fans haven’t seen from the Aztecs so far this year, a lead established in the first half seemed to drip away like sand in a hourglass.

It started when the Bulldogs cut the lead to three with a little over 10 minutes to play.

A jumper by ol’ reliable so far in conference play, senior forward Winston Shepard, helped extend the team’s lead to eight with a little over nine minutes left, but the Bulldogs made it just a two-point margin with 1:37 left.

Then Guerrero hit the 3-pointer with time expiring and sent the Aztecs into their first overtime game of the season.

Fisher had told his players to foul after a few dribbles off the dead-ball with 8.8 seconds left, but an air-ball from senior guard Marvelle Harris was scooped up by Guerrero and he took it to the corner for the game-tying shot.

“We need to do a better job collectively,” Fisher said of his team’s execution in situational defense.

Uncharacteristically, the Aztecs struggled from the line Tuesday, shooting just 60 percent through 30 attempts.

The Aztecs entered the night shooting 68 percent as a team from the charity stripe.

SDSU was also able to bottle up Fresno State’s leading scorer, Harris, to just four points in the first half. Both of his makes came on extremely acrobatic layups that were well defended.

Harris ended the night with 12 points and a 4-for-20 mark from the field before fouling out in overtime.

“Our goal was to keep him to 14 (points) or under, and we did and that was critical,” Fisher said.

Redshirt-freshman Zylan Cheatham was 3-for-3 at the half and looked to take strides in creating his own offense in the halfcourt and not just in transition.

One of Cheatham’s closest teammates, sophomore forward Malik Pope, was cold as ice in the first half going 0-for-4 from the field, including 0-for-2 on 3-pointers.

Pope entered the game with a total of 23 points over his last two games (the most in a two-game span for him this season)  and hadn’t missed a 3-pointer in the last three games over four attempts. He ended the night scoreless on five attempts from the field.

The Aztecs stay at home to take on Utah State University at 3 p.m. this Saturday.