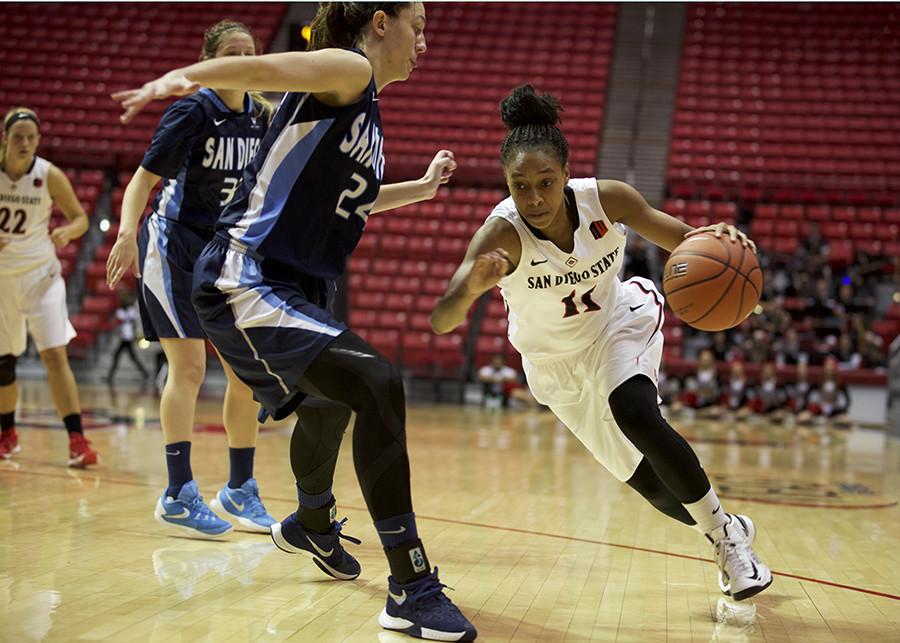 During their five-game skid to open the new year they have lost three games by a combined 13 points and have scored more than 60 points only once.

Wednesday’s 54-49 loss at Fresno State University told an all too familiar story for the San Diego State women’s basketball team. Good shooting in the first half, then a sharp drop-off that cost them the lead, then the game.

“I think people are understanding what we do really well and taking that away from us,” head coach Stacie Terry said before practice Tuesday. “We’ve been struggling offensively because (teams) have been playing a lot of zone.”

The game got off to a fast start and was knotted at 15 after the first quarter with both teams shooting better than 50 percent from the field.

SDSU came into the game looking to put two good shooting halves together after failing to do so the three previous games.

“The zone is what hurts us,” sophomore guard McKynzie Fort said Tuesday. “I think once we figure out how to attack the zone then our shots will be falling more and we won’t be so passive.”

Senior point guard Ahjalee Harvey came alive in the fourth quarter with three 3-pointers to give SDSU a 49-47 lead with 2:16 remaining, but Fresno State freshman guard Breanne Knishka responded with a 3 of her own to give the Bulldogs a 50-49 lead with 1:11 left in the game.

A bizarre turn of events led to a rollercoaster of emotions for the Aztecs late in the game. Fort was called for a flagrant-one foul with 26 seconds left in the game that resulted in two Fresno State free throws and possession. Senior guard Alex Furr would hit both free throws to give the Bulldogs a three-point advantage.

Fresno State junior forward Emilie Volk then missed both free throws after being fouled and senior guard Shauqunna Collins collected the rebound, but missed a layup, giving the Aztecs a shot to tie up the game.

However, Harvey missed the 3-pointer on the ensuing possession and the Bulldogs made their free throws to make the final score 54-49.

SDSU held the Bulldogs to 54 points, which is the third lowest it has allowed opponents in 17 games this season.

“(The defense) is always evolving,” Terry said Tuesday. “In this part of the season it’s not about getting up and down and making corrections, it’s the mental preparation and watching a ton of film.”

Harvey and junior forward Aleiah Brandon led the scoring for the Aztecs with 11 points each and combined to score 11 of SDSU’s 19 second-half points.

“This is a great group of kids and they haven’t let this losing streak deter them from getting better and getting in the gym,” Terry said. “They are keeping their heads fairly high knowing that we have to get better and I can’t ask for more.”

The Aztecs will look to snap their streak Saturday at 2 p.m. against Utah State University.