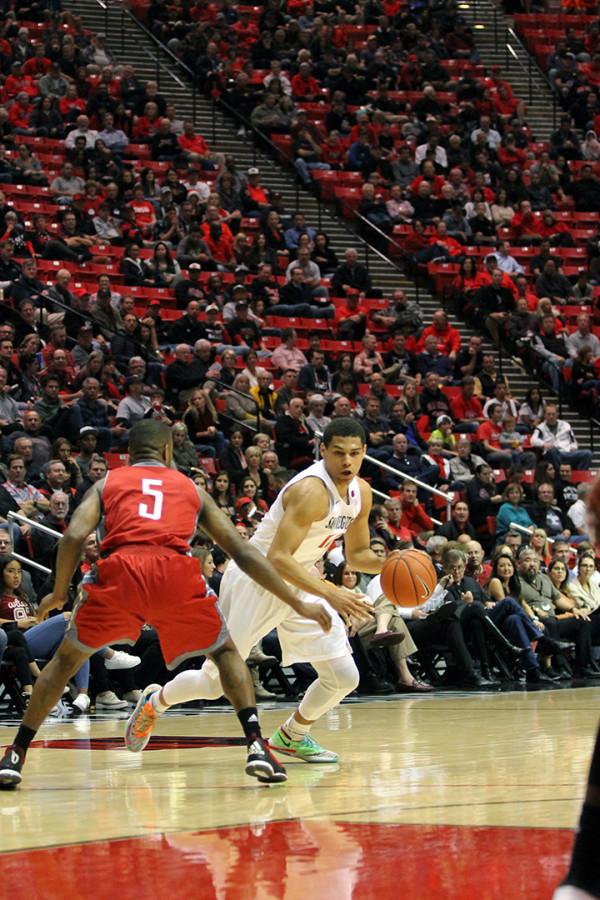 San Diego State men’s basketball will place its six-game Mountain West win streak on the line this Saturday when it squares off against the Utah State Aggies for the second time in three weeks, this time in Viejas Arena.

“It feels as if we just played them,” head coach Steve Fisher said. “I vividly remember the feel and the flow of that game and we got to play better.”

It’s no surprise the game is still fresh in Fisher’s mind. In that game it took the Aztecs (13-6, 6-0 MW) everything but a professional bullfighter and the Aztec warrior to wrangle the Aggies (11-7, 3-4 MW) into submission.

Not only did four of the five SDSU starters top the double-digit mark, but also all nine players that checked in for the Aztecs recorded at least two points.

However, in predictable SDSU fashion, the Aztecs saw an early second half double-digit lead dwindle down to a two-possession edge down the stretch, despite dominance in the paint and on the offensive glass.

As in their last contest, this game will feature two matchups that pit top offensive threats in the MW against one another, as senior forward Winston Shepard will take on junior forward Jalen Moore. And in the backcourt, sophomore guard Trey Kell will go toe-to-toe with senior guard Chris Smith.

“Jalen Moore and Chris Smith are very active, aggressive scorers and you watch tape on them now and they are playing better offensively,” Fisher said.

Shepard will look to repeat his Jan. 2 performance against the Aggies and continue his tear through conference play, as he has averaged 13.5 points, 7.3 rebounds, three assists and 1.5 steals in the six MW contests.

Moore has walked a similar route and has ratcheted up his level of play since the conference season began. In the Aggies’ seven MW games the junior has averaged 16.3 points, 6.3 rebounds and 2.4 assists.

But unlike Shepard, who has done most of his damage within the paint or from mid-range, Moore provides the consistent threat from beyond the arc. On a 36-percent clip, the big man is not hesitant to launch a few long balls, averaging more than five 3-point attempts per game in conference play.

While this big-man battle will be a delight to watch, the backcourt matchup of Kell and Smith will be even better.

Kell is coming off a career-night against Fresno State, when he muzzled the Bulldogs behind his 27 points, five rebounds and four assists. Not to be unexpected, the sophomore has become a reliable threat for the Aztecs this season as he moved back to his natural position of shooting guard, rather than playing point guard as he did last season.

The Aggies’ senior guard is only one game removed from his career-high of 35 points against Colorado State and will look to cool down Kell, whose play style nearly emulates his own. Both players are able to score from all three levels, efficient in their shot selection and both are high rebounding guards.

To maintain the narrative of similarities, take a look at the stats and they paint the same picture, as Kell and Smith are the MW’s No. 10 and 11, respectively, leaders in points per game in conference action. Also, Smith sits at No. 7 in field goal percentage to Kell’s ranking of No. 9.

But a huge factor heading into this game will not show on any stat sheet and that is that USU will be playing in its third straight game in as many states in only seven days. Last Saturday the Aggies were in a shootout with CSU in Fort Collins, then had to face a rejuvenated UNLV squad in Logan, Utah, on Tuesday and will now have to face the undefeated Aztecs in the always-electric Viejas Arena.

Regardless, this has all the makings of a very entertaining basketball game that, in usual SDSU fashion, will come down to the wire.