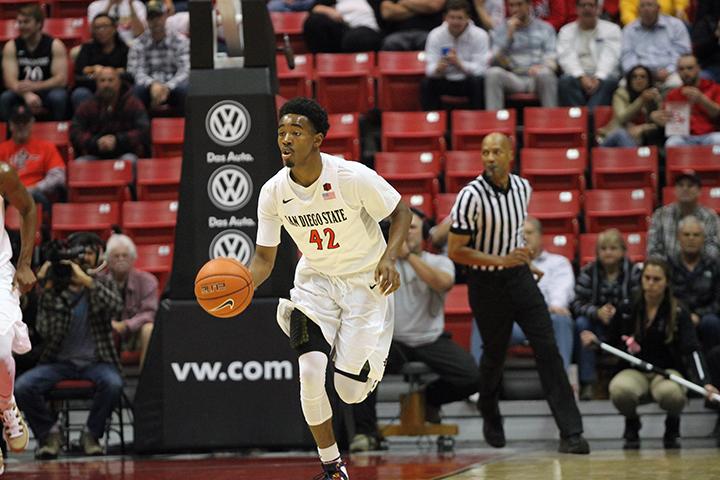 Luckily, for the Aztecs, they play in San Diego and when the sun rises, it shines brightly.

After a 7-6 record to open the season, their worst nonconference record since the 2004-05 season, the San Diego State men’s basketball team has chalked up seven straight conference wins to begin Mountain West play.

This year’s Aztecs (14-6, 7-0 MW) will look to become only the fourth team in school history to win at least eight straight conference matches when they head to Reno, Nevada, to take on University of Nevada  (12-7, 4-3 MW).

Recent history favors SDSU in this matchup, as it is a perfect 5-0 against Nevada since the Wolf Pack joined the MW in the 2012-13 season.

However, this year’s Wolf Pack has not only been dominant at home, where it’s 7-1, but it is also living up to its namesake as it has a variety of players that can takeover a game for stretches and score in bunches.

As they demonstrated in their win against in-state rival UNLV, this team’s backcourt is lethal and Nevada head coach Eric Musselman will utilize a smaller lineup to put his best athletes on the court.

The alpha of the Pack, senior guard Marqueze Coleman, has shown his aggressiveness to score, averaging 17.6 points per game, and his ability to draw contact off the dribble drive, where he is tied at No. 6 in the nation in free-throw attempts with 162.

But if the past seven games for the Aztecs is any indication, Coleman is in for a long night as SDSU has made it a habit to stop the leading scorers on opposing teams. Utah State’s Chris Smith was the latest victim, who entered the match with the Aztecs averaging 14.6 points — fourth-best in the MW — on 49.5-percent shooting, but finished the night with only two points and was 1-of-10 from the field.

Yet, SDSU will still have to contain Coleman’s running mates in the backcourt, junior guard D.J. Fenner and freshman guard Lindsey Drew, who are slightly bigger bodies that look to spread the ball around and play aggressive defense. All three of the starting guards are also effective rebounders, with all three averaging more than four rebounds per game.

Senior guard Tyron Criswell and sophomore guard Eric Cooper Jr. round out the explosive backcourt coming off the bench. Criswell is averaging 11 points per game and posted a double-double in his last two games and Cooper is shooting 38 percent from beyond the arc in conference play.

Not to be forgotten among the high level of play by the guards is freshman forward Cameron Oliver, who is holding down the fort in the paint. The freshman is averaging 11.1 points per game and 7.2 rebounds.

“They’ve got a freshman big who is as good as I have seen in the country,” Ducher said. “He is very, very good and very dangerous.”

The Aztecs will look to respond to the play of the Wolf Pack’s guards with their one-two backcourt punch in freshman guard Jeremy Hemsley and sophomore guard Trey Kell.

Hemsley has been consistent all season and is dangerous from anywhere on the court, averaging 45.3 percent from the field and 40 percent from 3-point range. He leads SDSU in scoring with 13.1 points per game.

Kell has come on of late for the Aztecs and was named MW Player of the Week Monday for the first time in his career. The sophomore had a career-high 27 points in SDSU’s overtime win against Fresno State and scored 10 of the Aztecs’ first 14 points in the second half versus USU to open up a tightly contested game.

“He still has so much room to grow and get better and he really does a good job of being a leader and being a good teammate,” Hemsley said. “It really is cool to see how much better he’s gotten and I’m more than happy to be a part of the team and be alongside him in the backcourt.”