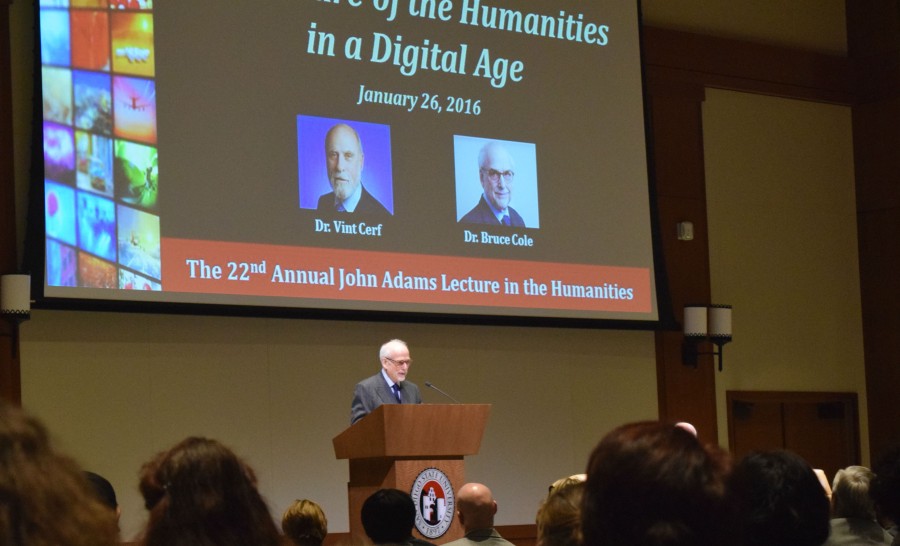 A Google executive known as one of the “fathers of the Internet” and an art historian with a heavy background in the humanities came together Tuesday, Jan. 26 to warn about what they called the digital dark age at the 22nd annual John Adams Lecture in the Humanities held in Montezuma Hall.

Vint Cerf, chief Internet evangelist for Google, and Bruce Cole, an art historian who served eight years as the Chairman of the National Endowment for the Humanities, explained that the problem inherent in rapidly evolving technology is that data bits created in the future will have trouble being interpreted if the original technology is not around to read them.

“My concern is that digital formats may not be preserved over thousands of years and so even if you have a digital object and you can read the bits, you don’t know how to interpret them,” Cerf said.

Cerf told the crowd of around 400 students and faculty that older types of data storage, such as floppy disks, VHS tapes and old hard drives, are already becoming hard to retrieve data from today.

“We know history because we have artifacts, especially writings, that we have been able to preserve … and we need to make sure we don’t lose our ability to preserve history in these forms even if it is born digital,” Cerf said.

Cole said while he was reluctant to adopt the Internet at first, he believes it represents a new way the humanities can be delivered and researched.

Richard Leary, a sophomore classics major, said he didn’t realize how much the humanities need the Internet to keep things accessible.

Raymond Vera Cruz, a senior sociology major, said one thing he took away from the event was even though the possibilities seem endless with technology, there are limitations as well.

Cerf also discussed the problem that URLs aren’t permanent links to information, and a domain name can easily disappear if the owner doesn’t keep renewing it annually.

One of the key figures in the movement to preserve digital information is Internet entrepreneur Brewster Kahle. He has been self-archiving web pages in an effort to preserve the URL data, but he ran out of memory to store the websites.

Kahle then bought a Christian Science church in San Francisco because the outside of the church looked like the logo of his company, Internet Archive, and replaced the organs in the middle of the church with hardware that stores petabytes of data.

Cerf said the church is an interesting place to visit because Kahle has mannequins set up in the pews all facing the storage hardware.

“My reaction (walking in) was ‘What the?’ But you know Brewster has his weird side,” Cerf said.

The Computer History Museum in Silicon Valley and Google are also making efforts to preserve software, websites and books.

“I would like to have technology in place not because I think we should save everything, but that if you thought something was worth saving then there’s a way to do it,” Cerf said. “And I don’t want the fact that it’s in digital form to inhibit our ability to make that decision.”