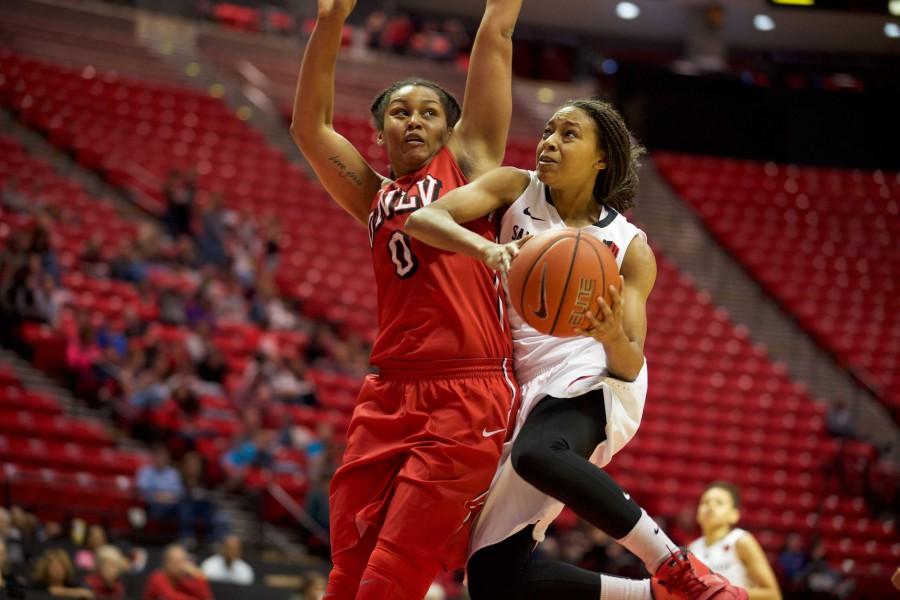 No team is happier to see the calendar change than San Diego State women’s basketball.

The Aztecs dropped their eighth game in a row, 55-41, and lost their eight-game home win streak in front of a rowdy home crowd against the UNLV on Saturday, which was National Girls and Women in Sports Day.

“It was a phenomenal crowd … I wish I could personally thank everybody for coming out tonight,”  head coach Stacie Terry said. “I know our young ladies appreciated it and it’s such an advantage to play in front of people like that.”

The game started at a breakneck pace and UNLV jumped out to a quick 7-0 lead over the first 2:52. The Aztecs held the Rebels to just two points the rest of the quarter and tied the game 9-9 despite shooting 23 percent.

After giving up seven points in the first 2:52 to the Rebels, the Aztecs’ gritty defense kicked in and limited UNLV to four points over the next 13 minutes.

But the Aztecs scored nine points in the second quarter and trailed 20-18 heading into halftime.

Neither team shot higher than 30 percent from the field or from 3-point range in the first half.

UNLV opened the second half with another 7-0 run over the first three minutes, but the Aztecs surged back with seven straight points from sophomore guard McKynzie Fort and cut the lead to 27-25 with 4:58 left in the third quarter.

Both teams traded baskets the rest of the half and a step-back jumper from Aztec senior point guard Ahjalee Harvey tied the score at 33 heading into the fourth.

The Aztecs couldn’t overcome an 11-0 run in the fourth quarter by the Rebels.

“We’re running a race, but we’re never crossing the finish line and we need to do a better job of finishing these games in the fourth quarter,” Terry said.

“I think we are all fighting (to break the streak),” senior forward Deidra Smith said. “I have been in a situation, at my previous school, when we didn’t have teammates who would fight, but here I know we’re going to give it our all in practice and give as much effort as we can in games.”

The Aztecs were out-rebounded 48-21 overall and 20-5 offensively.

SDSU shot 30 percent for the game, 26 percent from 3 and it took just seven free throws compared to 21 by UNLV.

“I think everyone is a little tense and I think being on the wrong side of the streak. We are shooting the ball too tense,” Terry said.

Harvey led the Aztecs in scoring with 10 points on 4-of-11 shooting and Smith finished with nine points.

The Aztecs head out on the road next to play Colorado State at 6 p.m. on Wednesday, Feb. 2.